Massimo Giorgetti Looks to Past to Jumpstart Pucci 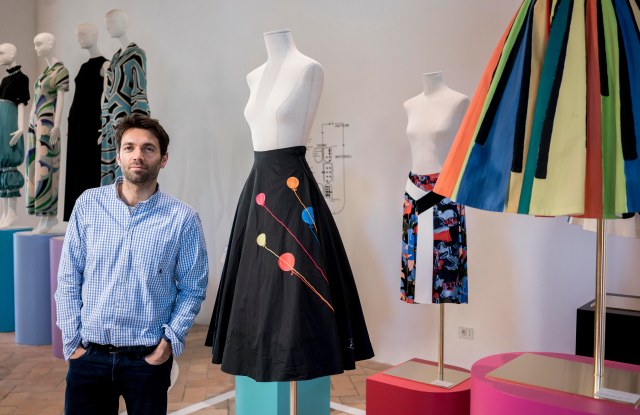 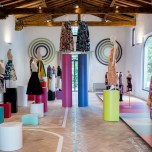 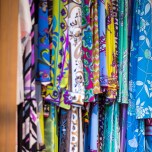 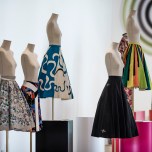 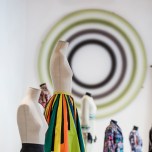 VILLA DI GRANAIOLO, Italy — “Have you ever seen anything like this in a private home?”

To be sure, the answer to Laudomia Pucci’s question would be no. She was surrounded by young students from Polimoda, Central Saint Martins and ECAL, who were busy reinterpreting Emilio Pucci design codes with modern techniques in one area of this private 16th-century residence, a few steps away from an exhibition of the brand’s looks and accessories called “Elements” and curated by Maria Luisa Frisa. Pucci opened the doors to her beautiful estate in the Tuscan countryside between Florence and Pisa as part of the LVMH Moët Hennessy Louis Vuitton’s Journées Particulières initiative last week and over the weekend.

For the first time, the brand’s creative director, Massimo Giorgetti, took part in the event, displaying his interaction with the daughter of the founder.

“The brand’s codes are so strong that you must respect them. Massimo has a modern way of thinking and knows the Italian lifestyle, he must and can pull this modernity together for the Pucci universe, which is very expansive,” Pucci said. “There must always be an evolution and this is my role, to push ahead, otherwise it’s all too literal and a museum. The brand is richer if it works with talent. If talent is on its own, it’s just another brand,” she observed.

Pucci’s excitement about the creativity at Granaiolo was contagious, tapping on a foulard lit up by music and sounds, or showing the new Pucci app devised as a passport and conceived by the students. Brush held mid-air, a young artist from Central Saint Martins showed her own take on Pucci prints. “We have to listen to talent,” Pucci said. “There is so much creativity, and we have to bring novelty and tradition together, fresh ideas on a historical patrimony.”

While obviously familiar with the archives of the brand, Giorgetti still marveled at many of the designs on display at the exhibit, enthusing about a military parka from the Fifties “that you can still wear today,” or a jumpsuit in one of the brand’s recognizable prints and also designed by the late founder that he revealed was one of his favorite ever.

Like the proverbial kid in a candy store, Giorgetti skipped from one mannequin to the other, only too happy to take yet another look at each design. “I told Laudomia we have to work on these, it could be a special project for the web site, or we could do cups — there is so much potential,” said Giorgetti, standing on one of the carpets with a Pucci pattern that decorates the terracotta floors of the building. The designer’s friendly and unassuming manner fit the ease he wants to bring back to Pucci, which he believes was essential to the label from the start.

As an example, he showed a brief archival video of two models in underwear proceeding to wear long evening gowns in jersey after pulling them out of a sack, perfectly crease-free. “We have to return to Pucci’s easy to dress and easy to buy attitude,” Giorgetti said.

Swiftly pulling up a skirt, he showed a pair of tiny legs sticking up in the air and designed on the back of shorts. “I love his touch of craziness, his wacky sense of style. Who would hide these legs in such a way?” he said with a laugh. “He was a genius in connecting the brand to holidays and the carefree, effortless weekend allure.”

He pointed out that the first Emilio Pucci collection was dedicated to ski wear in 1947.

Giorgetti said it was essential to strike the right balance with the past. “It would be too easy to use the archival prints, so we have to do it step by step.”

Asked if there was still a strong request for the Pucci prints, he responded in the affirmative. “People still love and want them. My first collection was criticized because there were not enough prints,” said the designer, whose first full-fledged Pucci collection show bowed in Milan in September 2015. “For my first collection, I wanted to do something different from the iconic prints, but now it’s the right time to start work on those iconic signs.”

Chief executive officer Mauro Grimaldi, who joined the company last year, said Giorgetti is restarting the brand by going back to Emilio Pucci. “Not many people realize this, but he is referencing the archives from the Fifties, pieces that have not been used in a very long time.”

Laudomia Pucci agreed, saying the rupture was with the most recent past. The opening of the Capri boutique, which shows black and white images from the Fifties photographed on the island, is another example of Giorgetti’s strategy, Grimaldi said.

“He is discovering Pucci’s heritage and the brand’s sportswear origins,” the executive said.

While pointing to the mood of the brand as “permanent resort,” so that customers “always feel on vacation,” Grimaldi said he wanted to “underscore it’s a 24-hour brand, it’s more of a mental state rather than buying clothes for a vacation.”

Grimaldi revealed plans to launch a line of sneakers and more accessories.