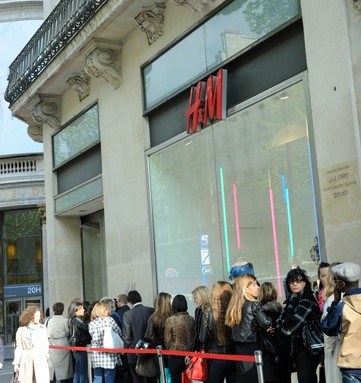 PARIS — The debut of Matthew Williamson’s collection for Hennes & Mauritz kicked off Thursday with a mixed response from Parisian and Asian shoppers.

A small and orderly line formed outside of H&M’s Boulevard Haussmann flagship in Paris, with the first customer arriving only an hour before the doors opened. When they did, shoppers walked in leisurely, even standing on the escalators (rather than racing down them). “I’m not sure that Matthew Williamson is really well-known by the public,” said Charlotte Gaspard, a press officer for Coty Inc.

Among those who’d checked out the collection online before it started selling, many were set on one item. “Everyone wants the same leather jacket,” said fashion student Leslie Lecat. “We’re going to have to run.”

The jackets, plus studded belts, some pulled from sales assistants’ hands as they restocked, proved to be bestsellers, too.

In Tokyo, about an hour before H&M’s Harajuku store opened, not a single customer was waiting outside. A relatively modest line started to form about 15 minutes before opening time, but it disappeared once the first customers were in the store.

Fumio Sakano came away with a long chiffon dress and an olive leather motorcycle jacket, which seemed to be among the morning’s most popular styles. All three customers in line behind Fumio at the cash registers were holding one.

The scene was definitively livelier in Beijing. Cold temperatures and a persistent drizzle didn’t stop fans from lining up, although it’s clear not all of them were there for Williamson. Thursday morning, H&M opened its first store in China’s capital, coinciding with the designer collection’s debut.