Matthew Williamson will open a new flagship store in the Meatpacking District on Monday. 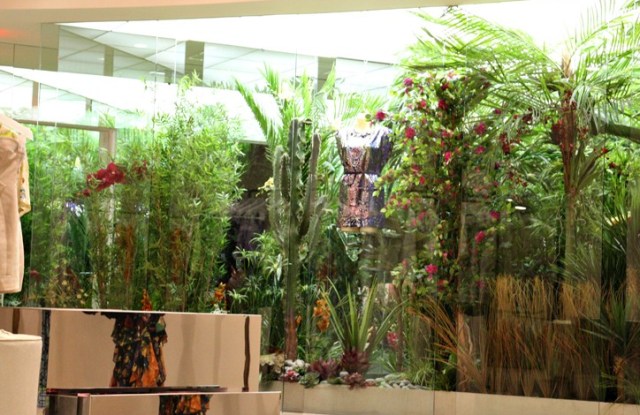 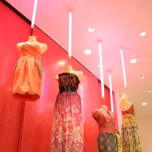 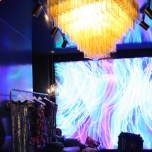 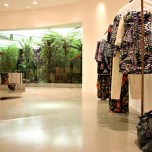 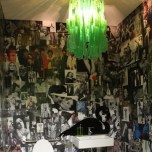 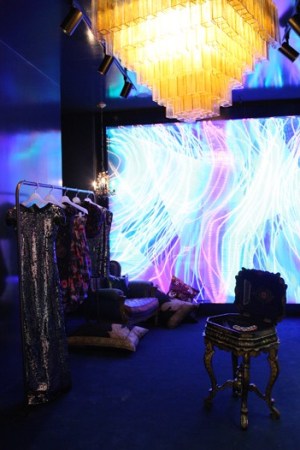 The VIP room with its light box.

NEW YORK — Matthew Williamson’s new 2,600-square-foot flagship at 415 West 14th Street in the Meatpacking District here could make a person forget the world is in the grips of a recession.

This story first appeared in the February 13, 2009 issue of WWD. Subscribe Today.

The Prussian blue-hued VIP room with its light box installation comprised of fuchsia, royal blue, turquoise and white fluorescent bulbs coursing behind a glass frame, recalls a high-end disco circa 1980. “It’s a moment of pure indulgent extravaganza,” Williamson said. “It was inspired by a Nick Knight image.” The dressing room is lined with hand-painted de Gournay silk-backed wallpaper designed by Williamson and covered with vintage brooches.

Then there’s the 64-square-foot glass-encased tropical garden. The fuchsia hot house flowers blooming inside are not unlike Williamson’s delicate, exotic designs hanging nearby. But the garden is something of an illusion. Daylight filters above the plants look like a skylight. And the greenery? “It’s all fake,” he said. “I call it English meets tropical. My work is quite known for its escapist quality. A woman needs a reason to buy, especially in this environment. At the end of the day, it’s all about seduction. I think the garden will enhance the selling space.”

Prices for the collection range from $400 for a skirt to $6,000 for a full-length sequin backless dress.

Joseph Velosa, chief executive officer, declined to disclose volume projections for the Meatpacking unit, the designer’s first store in the U.S., but said the Matthew Williamson flagship in London does sales of about $2 million a year. The New York store opens Monday, with a kickoff party Sunday night. Williamson’s runway show for fall is scheduled for Tuesday.

Williamson conceded the store’s timing is less than perfect. “This project was two years in the making,” the designer said. “It was committed to before anyone had any knowledge of what would happen.”

The store is a validation of sorts, recognizing Williamson’s following here. His name recognition is expected to grow in April when the designer creates men’s and women’s collections for H&M, which will carry the line in 1,700 of its stores. Previous designer collaborations bowed in just about 200 stores. Designing men’s wear for H&M “has also inspired me to think about men’s wear,” Williamson said. “Maybe the blue [VIP] room will become a men’s wear room.”

He continues to grow his accessories, shoe and handbags businesses, which have expanded to include full collections for each category. A “pod” or large alcove opposite the VIP room is painted blush pink and displays products alongside carved wood birdcages on shelves lit from within.

“It’s an opportunity to show the American market what I do as a designer in a controlled space,” he said of the unit. “It has a lot of passion in it. I hope you understand the DNA of the brand as opposed to walking into [a small area] in a department store.”

Clare Ceprynski, Williamson’s image director, cut the long rectangular space, which was formerly a Bodum store, on the diagonal and built pods or small round rooms off the main aisle. The main areas of the store are divided into circular and egg-shaped areas, delineated by gold strips embedded in the concrete floor. A Chinese pink polished plaster wall at the front of the store looks like suede. The rest room walls are covered with a collage of images – photos, pages of books and magazines – of Hollywood icons. A similar wall of fame exists in the London flagship.

“Gwyneth Paltrow once came out and said, ‘I’ve just been in the bathroom looking at myself on the wall. It was kind of freaky’” Williamson recalled.

He and Velosa maintain a majority interest in the company. Baugur, the embattled Icelandic investment firm, owns 26 percent and TSM, 22 percent. The company is opening stores in Dubai and Kuwait in the spring. “We’ve put the plans for the Los Angeles store on hold for the moment,” Williamson said. “But it’s definitely part of the plan.”