Pierre-Henri Mattout has relaunched his line after a two-year furlough. 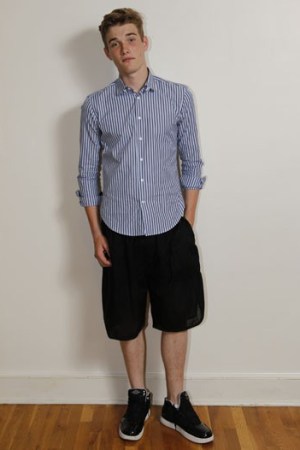 Pierre-Henri Mattout has relaunched his line after a two-year furlough. Clean, sophisticated and Frenchy, it’s a fresh alternative to all the pre-worn Americana in the contemporary market. Using fabrics with simple patterns and lots of blue, Mattout played with tonal patchworks, splicing and blocking. Key items include poplin shirts, tapered track pants, blazers and boxers. With them, Mattout flexes the sportswear muscles he developed at Victorinox and the tailoring skill he refined at Dormeuil.

This story first appeared in the June 15, 2010 issue of WWD. Subscribe Today.