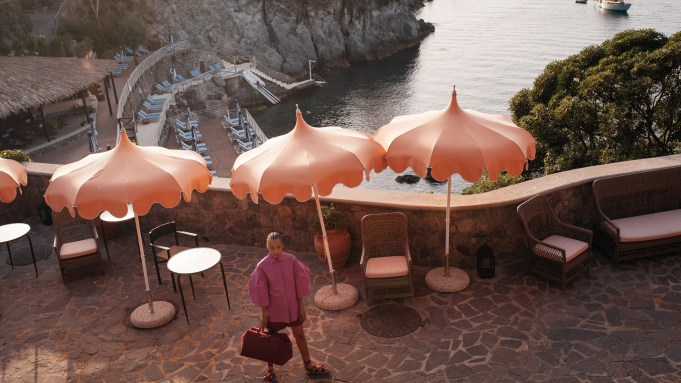 Who wouldn’t want to take a trip to the island of Ischia, wondered Ian Griffiths, creative director of Max Mara.

That is precisely what he and his team did to present the brand’s resort 2022 collection, with a show that will be held this evening at the striking Hotel Mezzatorre, overlooking the Gulf of Naples and nestled in a former 16th-century watchtower.

The COVID-19 restrictions obliged Max Mara to forego its planned resort show in St. Petersburg last year but the company succeeded in orchestrating the event in Ischia, the playground of fashionable society since the ’50s, just as Italy starts to see the positive results of the rollout of the vaccinations campaign. The event was carefully planned, safety still top of mind, with only about 80 guests expected at the open-air show, to be followed by a dinner.

The company embraced aerial advertising on Monday as a small plane flew over throughout the day with a sign that read “Max Mara Loves Ischia” and it’s safe to say the event was meant to draw attention to the island and contribute to kickstart the summer season here. Everyone is yearning to get out again and see the world, and Ischia could very well be a first stop.

Indeed, the resort collection is called “Local Color” and is inspired by traveling, evoked by writer Truman Capote in his tales of the same name. The symbols of the narrative are his Swans, beautiful women who led a fascinating life. As Griffiths said, though, Max Mara is catering to the modern woman who has a busy life. And an international one to boot. Max Mara’s revenues in 2020 totaled 1.2 billion euros, and exports accounted for 60 percent of sales. The group has a network of 2,500 stores in more than 100 countries.

The film of the show will be directed by Ginevra Elkann and will be available on July 1. The movie director debuted with “Magari,” released in 2019, studied at the London Film School and has worked with Anthony Minghella and Bernardo Bertolucci. Coming full circle, she is also the granddaughter of Marella Agnelli, one of Capote’s famed Swans.

Max Mara is celebrating its 70th anniversary this year. The celebrations kicked off in February with a digital runway show that was filmed at Milan’s La Triennale design museum.

Previously, starting with the 2015 pre-fall season, the Italian women’s fashion group has staged runway shows in New York, London, Shanghai, Reggio Emilia — where it is headquarterd — and Berlin.