Max Mara fashion group has partnered with the Whitney Museum of American Art for its official opening event to be held May 24. 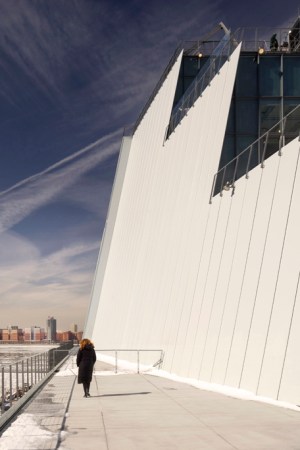 REGGIO EMILIA, Italy — The new Whitney Museum of American Art is one of the biggest New York cultural projects in recent years — but it is also one that has a strong connection to Italy.

The 220,000-square-foot building, which is located at the corner of Gansevoort and Washington Streets in the Meatpacking District, is designed by the Genoa-born, Pritzker Prize-winning architect Renzo Piano and will almost double the museum’s exhibition space. In addition, Italy’s giant Max Mara fashion group has partnered with the institution for the Whitney’s official opening event to be held April 24. Max Mara is organizing a private visit with around 80 collectors, curators and artists that afternoon, led by Piano, Adam D. Weinberg, the Whitney’s Alice Pratt Brown director, and Donna De Salvo, chief curator and deputy director for programs. Julian Schnabel, Lori Simmons, Francesco Clemente, Mario Sorrenti, and Mark and Renee Rockefeller are some of those expected to attend. This will be followed by a dinner in the museum’s boardroom and later by a party with 4,000 guests.

“It’s a natural rapport and our family has a long-standing affection for the Whitney Museum, its history and what it has always represented for contemporary art,” Luigi Maramotti, chairman of Max Mara, said during an exclusive interview at the group’s headquarters here, a 90-minute drive east of Milan, designed by architect John McAslan, and overlooking the park created by landscape architect Peter Walker.

Maramotti declined to reveal the cost of the Whitney event.

“The Whitney is unique not only for its patrimony of works of art but also for its institutional role, the biennial….It’s a beacon and a reference point,” added the eloquent and soft-spoken executive, praising the institution’s role in fostering contemporary art in the U.S. and open-minded point of view.

The Maramotti family, which owns Max Mara, has long been a patron of the arts, and in 2008 unveiled a 43-room gallery in the company’s former manufacturing plant in Reggio Emilia. In the hall outside Maramotti’s office hang three impressive paintings by Ray Smith, “The Battle of the Tailors.” Over the years, the family bought several artworks that went on to be exhibited at the biennial, said Maramotti, citing American artist Ellen Gallagher’s pieces, for example. Max Mara and the Whitney have collaborated on a number of events, and, last year, the Maramottis received the museum’s American Art Award.

But the Maramottis aren’t only patrons of the Whitney. The company also awards the Max Mara Art Prize for Women through a collaboration with the Whitechapel Gallery in London.

The fact that Piano had been charged with designing the new Whitney building was also “fundamental” in spurring Max Mara’s support, Maramotti said. “We create a connection in the spirit of national pride. There is a desire for those that work in the arts and in the industry to bring back a virtuous Italy at the center of international visibility.”

Maramotti said he had “only admiration for Piano’s lack of attention-seeking behavior. His project is at the service of the museum and its visitors, not to affirm himself.”

Max Mara partnered with the Renzo Piano Building Workshop to produce the brand’s new Whitney Bag, which will be displayed in the windows of Saks Fifth Avenue starting Saturday. The most distinctive element of the tote is the leather ribbing reminiscent of the steel tie-beamed exterior of the new museum. The bag combines traditional handcrafted and innovative techniques: brass plates are used as a mould for strips of leather that are then topstitched to create the pattern on the accessory, reflecting the structural metal components of Piano’s architectural project. The facade of the Whitney was an inspiration for the buckles, the inside pocket and the snap hook — a signature feature of the bag, which were all created with a special galvanic coating, and the lining comes in red.

The Whitney Bag, which took a year to develop and is produced in-house, will be available in three sizes and colors — black, bordeaux and tan. There will also be an exclusive collectors’ limited, numbered edition of 250 bags in a light blue/gray color similar to the metallic facade of the museum.

This is the first time the architect has helped design a handbag, and the goal is to channel proceeds to the Renzo Piano Foundation to finance its cultural and educational projects. “Our aim was to apply one of the most characteristics elements of the museum project — the facade — to the bag: hence the idea of the modular strips enveloping the exterior,” Piano said. “We tried to maintain a simple, pure design, working only on the details by applying a creative use of technology and placing the accent on the respect for the materials.”

The facade, he said, was one of the most complex elements of the museum to create. Another highlight of the building is the “areas for preparing the exhibitions [that] are closely connected to the exhibition rooms, which in turn stretch from the indoors outdoors onto the terraces. This creates a close connection between art spaces and the city,” he said.

Standing near the High Line, the Whitney is “sort of the terminus, the end of line,” mused Maramotti, and “a paradigm for the future in creating a contemporary art museum in an iconic city.”

The building includes an education center with dedicated space for state-of-the-art classrooms; a 170-seat multiuse theater; a black box theater for film, video and performance with an adjacent outdoor gallery; and a Works on Paper Study Center, Conservation Lab and Library Reading Room. The classrooms, theater and study center are all firsts for the Whitney.

The large gallery for temporary exhibitions covers 17,280 square feet and is the largest gallery without columns in New York.

“Our hope is that the light and the transparency of the spaces and the art will be able to create a cultural exchange between the museum and the community of the district, and with the city on a wider scale,” Piano said. “This is why our aim was to design an inviting building, one that rather than taking possession of the space on the ground can be glimpsed from the street. A museum is a place of major civic importance, and it’s right that it should be transparent and accessible.”

There perhaps is another reason for Max Mara’s involvement with the Whitney: The U.S. is a strong market for the group and has consistently posted double-digit gains over the past three years. In 2014, sales in the U.S. were up 25 percent, totaling 130 million euros, or $173 million at average exchange. “We firmly believe in this market, which is product-oriented. A class of more sophisticated consumers is taking shape, eyeing special products, and we have the added value of our history,” observed Maramotti. Recently, a number of celebrities have been photographed wearing the brand, from Sarah Jessica Parker to Kim Kardashian, as well as the Duchess of Cambridge. Max Mara also began working with the likes of Amy Adams and, previously, Jennifer Garner, for its advertising campaigns, specifically for its leather goods. The brand’s first shop-in-shop at Bergdorf Goodman will open in a month, and a freestanding store recently opened in Miami’s Design District.

Group sales in 2013 totaled 1.3 billion euros, or $1.73 billion, and Maramotti said he expects to close 2014 with a single- digit increase. Unlike for most fashion brands recently, Greater China did not slow down for the company, posting a 12 percent gain last year, he said.