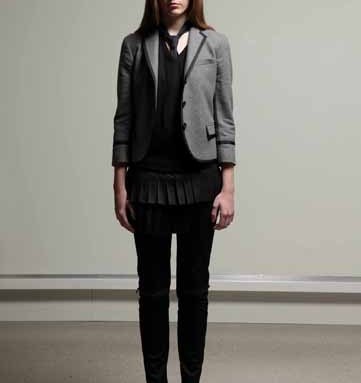 PARIS — The bumster is born again.

One of the signature and incendiary creations of the late Lee Alexander McQueen, the low-slung pants figure in the revamped McQ collection, which is now under the full control of the McQueen company following the expiration of its licensing pact with Italy’s SINV SpA.

A 160-stockkeeping unit women’s pre-fall collection — to be unveiled to the trade today in showrooms in New York, Milan, London and Tokyo — is the first volley in an expansion drive for the five-year-old contemporary brand. Plans include a push into accessories and planting a bigger footprint in key markets like America.

“We always felt there was scope to create a brand that was more accessible —and a little more edgy,” said Jonathan Akeroyd, president and chief executive officer at Alexander McQueen, part of Gucci Group. “We’ve got a strong ambition for it.”

Expressed as wholesale volume rather than royalty income, McQ already represents about 20 percent of the firm’s business, and should grow to 35 percent by 2012 given robust demand today for price-driven designer propositions, Akeroyd said in an exclusive interview. He declined to provide revenue figures.

“There still aren’t that many luxury houses that have contemporary lines,” he noted. “We’ve created quite a strong name and brand image.”

McQ is currently sold in about 350 doors, primarily in the U.K., Italy, Russia and Asia. There are five shop-in-shops — including at Harvey Nichols in London and I.T in Hong Kong — plus three freestanding franchise boutiques in Kuala Lumpur, Malaysia, and Shanghai and Hangzhou, China. Key wholesale clients include Selfridges, Harrods, Saks Fifth Avenue and Lane Crawford.

Although the business is currently tilted toward dresses and knits, with women’s categories representing 75 percent of volume, Akeroyd said the range would be broader, and more casual, with the McQueen company fully in charge of product development.

The McQ pre-fall collection riffs on McQueen design signatures, such as men’s tailoring and strict, structured silhouettes, spiked with some playful influences.

Pieces include a gray wool cropped schoolboy’s blazer edged with a black grosgrain trim, and a high-necked cotton trenchcoat with kilt-like pleated skirts. There are also punkier items, such as a black A-line minidress in coated black cotton, with antique brass zippers stitched into its skirts, which can be unzipped to make the silhouette more voluminous. And one black graffiti print on a green silk minidress is taken from the scrawl that’s etched into wooden school desks.

The collection revolves around natural materials, such as cotton, wool, silk and leather. And while it’s a diffusion line, the pieces show plenty of attention to detail — jackets are lined in natural cotton, while a relaxed fleece sweat top is stitched with a subtle pattern that follows corset construction. Even the metal buttons and rivets on some jeans are embossed with an intricate McQ graffiti print.

Complete fall-winter 2011 ranges for men and women, including jewelry, bags and shoes, are to be unveiled to retailers next February for July delivery.

Akeroyd said the late founder set a strong template for McQ, and was instrumental in the decision to bring the brand in-house. Sarah Burton, who was named creative director of McQueen following the founder’s suicide last February, will oversee a new group of designers headed by Pina Ferlisi, whose experience in the U.S. contemporary market is seen as vital. Ferlisi’s resume includes stints at Generra, Coach, Marc by Marc Jacobs and Gap.

Akeroyd also described plans to pump up the marketing profile of the brand, with its m-c-q.com Web site the main vehicle. A film, in lieu of a look book, is to make its debut on the site this week depicting four young girls in real-life situations wearing the pre-fall styles and talking about their lives. The McQ site will be the platform to launch e-commerce next year, and is to be linked with Tumblr.com, a creative and blogging hub.

Akeroyd stressed a “democratic” approach to marketing. To wit: Events planned for fashion weeks in London and New York next spring will involve consumers, as well as the trade.