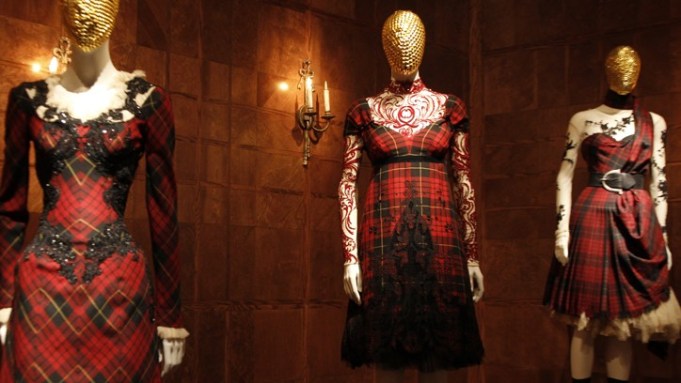 NEW YORK — Web rumors swirled on Thursday that Alexander McQueen’s Sarah Burton may indeed have been tapped by Kate Middleton to design her historic wedding gown. Whether or not this morning’s London festivities prove true that speculation, this is a golden moment for the house of McQueen as the genius of its founder goes on view at the Metropolitan Museum of Art. “Alexander McQueen: Savage Beauty” launches at Monday night’s Costume Institute Gala and opens to the public on Wednesday.

McQueen’s challenge of traditional ideas of beauty is as renown as his mastery of craftsmanship and the drama of his garments and runway spectacles. The exhibit marries these notions seamlessly in its exploration of the complex and creative world of the designer, who took his own life in February 2010. It addresses the themes that informed McQueen’s work including life and death, gender and sexuality and race and religion, as well as a reverence for 19th-century romanticism and an irreverent hand with fashion convention. The exhibit also highlights plenty of examples of McQueen’s most famous runway moments, from the fall 2003 billowing cape shown in an artificial wind tunnel to the spray-painted, white cotton muslin dress worn by Shalom Harlow from spring 1999 and a miniature version of the Kate Moss hologram that ended his fall 2006 show.

The exhibition features about 100 pieces from McQueen’s London archive and the Paris archives of Givenchy as well from the late Isabella Blow’s wardrobe, which Daphne Guinness bought last year and loaned to the museum. It opens with two looks from McQueen’s spring 2001 “Voss” collection: a dress from ostrich feathers and painted red medical slides and another dripping in razor-clam shells.

“McQueen would challenge normative conventions of beauty,” said Andrew Bolton, who curated the show at the museum’s Cantor Galleries with the support of Harold Koda. “Voss’ fetishized materials, silhouettes and themes were iconic to McQueen.”

The powerful opening leads to a stylized recreation of McQueen’s first atelier in London’s Hoxton neighborhood. Here, the famous bumster trousers and skirts are featured along with pieces from his “Jack the Ripper Stalks His Victims” graduation collection including a silk satin jacket lined with red silk and human hair. A gallery called “Cabinet of Curiosities” showcases Philip Treacy headdresses and Shaun Leane jewels alongside looks such as a golden, armorlike dress from the designer’s days at Givenchy, a molded plastic bodice laced with realistic-looking worms, and the hand-carved prosthetic legs Aimee Mullins wore for the spring 1999 “No.13” show. “In a way, it’s the soul of this show,” Bolton said of this gallery. “The curious pieces show Lee’s more provocative and confrontational side. You also see his love of craft, and how he advanced fashion by embracing complex ideas.”

The “Romantic Nationalism” gallery juxtaposes tartan looks from the fall 1995 “Highland Rape” with those from “Widows of Culloden” for fall 2006.

The show ends with a lineup from “Plato’s Atlantis,” McQueen’s last complete collection, which touched on “the devolution of mankind rather than the evolution,” Bolton said. “I wanted to end with this because I feel that it brings everything together. It was the balance of craftsmanship and conceptualism, which is what McQueen was about.”

François-Henri Pinault and Salma Hayek will serve as the gala’s honorary chairs, with Colin Firth, Stella McCartney and Anna Wintour as co-chairs.