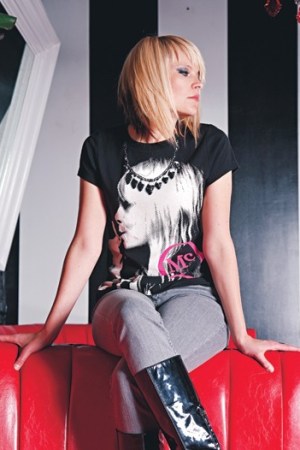 For someone who protects his name and image as fiercely as Alexander McQueen, designing a collection for a mass retailer might seem like a compromise, a declaration of “If you can’t beat ’em, join ’em.” But McQueen stresses the collection he’s designing for Target is entirely his own, no holds barred.

“I can’t work with any kind of restraints,” said the designer. “You can’t give me any boundaries.”

Nor does McQueen see any irony in the fact that his gowns cost thousands of dollars while his clothing for Target, which operates 1,658 stores in 48 states, will be priced under $129.99. That’s because McQueen knows what it’s like when money is tight. “I was brought up on this,” said McQueen, the son of a London taxi driver. “I wasn’t born with a silver spoon in my mouth.”

McQueen’s collection for Target’s new Designer Collaborations initiative will launch in March. While the collection might appear to mirror the moves by H&M to link with the likes of Karl Lagerfeld, Stella McCartney and, last week, Comme des Garçons, the Target line is actually an ongoing program aimed at bringing a series of established designers to the masses at low prices. Each collection will be in about 250 stores for a limited time. The entire line will also be available at target.com.

Designer Collaborations is a separate program from Target’s Go International, which is sold in nearly all the chain’s stores and focuses on young or emerging designers. Names the retailer has featured in the past include Luella Bartley, Proenza Schouler, Behnaz Sarafpour, Rogan and Richard Chai. Industry sources have estimated that Go International does more than $100 million in annual sales.

As the first participant in Target’s Designer Collaborations, McQueen is eager to expose a new customer to his richly nuanced and atmospheric aesthetic. The line has its roots in McQueen’s diffusion collection, McQ, which made its debut in January 2006 and ranges in price from $235 for a lace panel dress to $860 for a wool admiral’s coat. “The focus of this collection will be younger and more renegade, but always signature McQueen,” the designer said at the launch of McQ. His new venture is called McQ Alexander McQueen for Target.

“We’d always been approached by people like H&M and other high street [retailers] in England to do things,” McQueen said in a telephone interview. “I’m not very fond of following the norm. I didn’t want to follow Stella [McCartney] at H&M or Karl Lagerfeld at H&M. I didn’t see the point of it. I like to infiltrate an area that’s not really aware of me, as such.”

When Ed Filipowski, the publicist and events producer, suggested to McQueen that he work with Target, the designer said he was initially ambivalent. “I’ve never understood Target,” he said. But the idea of spreading his name appealed to the designer. “Apart from the East and West Coasts, my company doesn’t have any visibility in the U.S.,” he said. “I always liked the idea of people in the Midwest wearing my clothes. The idea of this upstart from London going where people haven’t heard of me, I think that was interesting to me. I think it’s quite adventurous of Target.”

“I was looking for someone with the uttermost feeling of McQ,” said McQueen. “We use icons in British music, and she stood out. She’s a great-looking girl and has a personal style. It fell into the idea of the New York underground music scene. It was more the atmosphere she portrays.”

The collection has a muted color palette of black, white, gray and tan with accents of cobalt blue and bright pink. Studs and mesh give items an edge. There are studded jeans, shorts and denim jackets with asymmetrical closures, short tuxedo jackets and matching shorts, dresses in a blue and white painterly fabric, a one-shoulder dress in a gray-and-black zigzag pattern with a thick black belt, and a T-shirt with the image of Moss. “The manufacturing is well finished and second to none in that price point,” McQueen said of the collection. “It’s not expensive at all, but you get the execution of a well-designed collection. Because of the use of materials and the feeling, [Target] knew where the collection would go.”

The designer’s favorite pieces in the line include “the pink and black pieces and the little prom dresses.”

A goal of McQ Alexander McQueen for Target is to attract a younger crowd to the designer’s collection. “It’s more about the music scene and fashion scene in the East End area, where I live,” said the designer, adding the point of the line is not to educate people about fashion, but rather, “it’s a feeling about the time we’re living in. If you start to give the whole of America that sense of where I’m from, the underground music scene, it’s not so much about a logo, it’s more about a feeling.”

McQueen’s Target collection was put in place before the recession began, but the retailer is confident of the strategy (for more on Target’s latest financial results, see related story). “We remain confident in our long-term strategy built on the premise of ‘Expect More, Pay Less,’” said a Target spokesman. “Part of that is differentiation. Our Designer Collaborations program will help differentiate us and give us a competitive edge.”

While Go International targets 18- to 24-year-old women, McQ Alexander McQueen for Target is positioned to an 18- to 34-year-old consumer. “We’ll find that both younger and older shoppers will dip into the collection,” the spokesman said. “One of the goals of Designer Collaborations and the heavy marketing push we have is to attract shoppers to our stores, including consumers who don’t shop our stores on a regular basis. We want to increase frequency and encourage first-time shoppers to Target.”

Target is not McQueen’s first collaboration — he launched the Alexander McQueen Puma range and Samsonite Black Label Alexander McQueen — but it is his most populist effort. “I cover specific areas of life,” the designer said. “Puma has that Generation X aspect with fashion and sneakers and Samsonite was more of an art-based project. Sometimes it’s the monetary thing we’re doing, but this is more about getting an idea of what I’m about across in the [U.S.],” he said.

McQueen doubted the Target line will bring more consumers to his core collection. “There is no way the main line could go to Middle America,” he said. “I’m not getting any [benefit from the Target association] for the main line. It’s taken me 15 years to get the concept of Alexander McQueen over there.”

On the other hand, the Target partnership “will open doors for McQ in other stores. This is a great taste of McQ in areas where it doesn’t exist. There could be some amazing things that come from this. We could change the whole concept of where we distribute.”

It’s taken McQueen a long time to reach the mass market and the designer doesn’t expect to do it again any time soon. “I have to find something in it to make me want to do it,” he said of the hookups. “Target is just one season. I don’t like to repeat myself. It’s a one-off and that makes it an eclectic collection. It’s great as pieces that will never exist again, and for me it’s a good marketing strategy. If I do it all the time, it dilutes the concept.”