The store, on Rue Saint-Honore, spans 5,300 square feet and is the company's largest in the world.

By Miles Socha and Joelle Diderich on September 14, 2015
View Slideshow 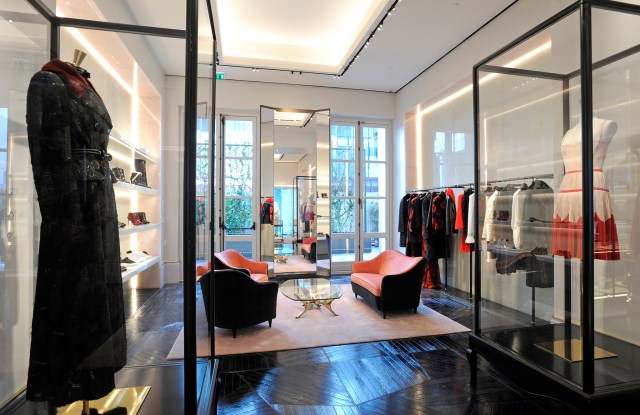 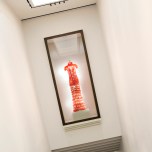 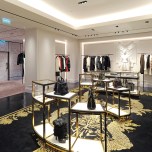 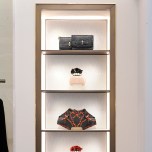 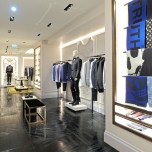 PARIS — “It’s well overdue,” Jonathan Akeroyd, chief executive officer at Alexander McQueen, said about the company’s new Paris flagship, which opens today — some 14 years after the British brand’s founder started doing runway shows in the French capital, and amid a flurry of boutique openings from a swath of international labels eager to capture robust tourist flows.

McQueen is making up for lost time by coming in with its largest store in the world, spanning some 5,300 square feet, and christening it with a party during Paris Fashion Week.

“The time is right as business in Europe is strong at the moment,” said Akeroyd. “It’s truly an important fashion city for us.”

The unit is sure to capture traveling Chinese, McQueen’s number-one client nationality (Americans rank second), although boutique staff intend to cultivate a local customer base with broad assortments of its complete product ranges for women and men.

A series of brightly lit rooms sprawling over two floors, the unit is located on Rue Saint-Honoré, one of the hottest and most coveted retail strips in Paris. Coach will open its first freestanding store in Paris on the street later this month, and Tory Burch, & Other Stories and Mulberry are among other relative newcomers.

McQueen is located across the street from the Mandarin Oriental hotel and within minutes of several luxury hotels, including the Costes, Meurice and the soon-to-reopen Ritz Paris.

No fan of “copy-and-paste concepts,” Akeroyd said the Paris McQueen unit echoes some elements of the interior concept introduced four years ago by David Collins Studio, but with a host of local touches, including mainly vintage furniture. McQueen creative director Sarah Burton was keen to recreate the feeling of a grand French home, and her team developed a special wallpaper for the eveningwear salon on the lower level — a feature not seen at any other McQueen boutique.

“It makes it feel intimate, more special and gives a lot of character,” Akeroyd said.

By contrast, the entrance is designed to create a sense of volume and scale, thanks to high ceilings, white plaster walls and a double-width staircase, made of black marble, that leads down to the lower ground floor and is crowned with a protruding glass mannequin case set on a stepped white onyx base.

Victorian-style glass display cases showcasing individual looks — similar to those used in the recent “Alexander McQueen: Savage Beauty” exhibition at the Victoria & Albert Museum in London — are dotted across the ground level, which features a floor made of cracked black marble and black gloss-lacquered parquet.

The space, which opens up to a small garden terrace in the back, is home to women’s ready-to-wear, accessories, shoes and bags, which are displayed in large wall niches made of pink and white onyx.

“This is really creating more of a welcoming ambiance and somewhere where you want to spend time,” said Keith Fowler, worldwide store planning director at Alexander McQueen. “There’s a lot of areas where we can seat clients and host them, give them a drink. It is about hanging out.”

Downstairs, which houses women’s wear, men’s wear and eveningwear, the focus is on the collections. White plaster walls, with molded panels incorporating elements such as wings, flowers, tangled leaves and shells, contrast with two specially commissioned black and gold 24-by-12-foot rugs from The Rug Company.

Among the vintage furniture pieces dotted throughout the store are a love-seat sofa and two armchairs by Giò Ponti, and a glass coffee table perched on a golden phoenix with illuminated onyx wings by Jacques Duval-Brasseur.

“It’s the idea of all the furniture pieces having a personality and having a story, so they’re all Fifties originals,” said Fowler.

As in other McQueen units, the Paris location will offer ready-to-wear items and accessories, such as limited-edition clutches, that are only available in the retail channel.

The London-based firm, part of luxury and sporting goods group Kering, is reconfiguring its business to be based more on its own retail rather than the wholesale channel, aiming to surpass the 50 percent ratio in the near future. Its network now spans 42 directly operated stores — including freestanding boutiques, shops-in-shop and outlets — under the Alexander McQueen and McQ banners. Key locations include New York; Los Angeles; Miami; Dallas, Tex.; San Francisco; Las Vegas; London; Milan; Monaco; Vienna; Hong Kong; Tokyo; Beijing, Shanghai and Chengdu, China.

Akeroyd said the company has been adding about five to 10 locations a year. Openings over the summer included its first store in Macau, in the Galaxy resort, and its second location in Singapore, in Scott Square. Toward the end of the year, McQueen plans to open in Shenzhen’s MixC shopping center — its seventh store in China.

The Americas and Asia-Pacific are respectively its top-two regions, and Akeroyd spies additional retail opportunities in Europe, with Rome, Zurich and possibly Geneva among possibilities for future boutiques.

Akeroyd declined to discuss figures but market sources estimate the unit should generate annual revenues of about 9 million euros, or $10.2 million at current exchange rates.