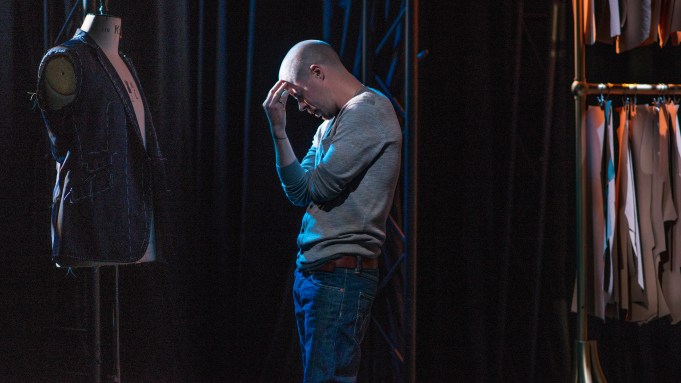 LONDON — “McQueen,” a play about Alexander McQueen and his visionary imagination, which premiered at the St. James Theatre earlier this year, opened this week at London’s larger, and grander, Haymarket Theatre, the British equivalent of an off-Broadway play hitting the mainstream.

As the audience takes their seats for the play, Stephen Wight as McQueen is already in situ on the stage, moodily pacing and fiddling with a belt, a reference to the belt McQueen used to commit suicide in 2010. He is distracted by the intrusion of a waifish girl called Dahlia, played by Carly Bawden, who has been watching his studio from a tree for 11 consecutive nights. On this evening, she breaks in to steal a McQueen dress. He catches her, but, instead of calling the police, they embark together on a fantastical journey through London and into his creative soul.

“In some ways, there is a bit of twinship in how they relate,” says Bawden, adding that she has a stack of old “Vogues and Elles” at home and she remembers loving the theatricality of McQueen’s work. “There is a symbiotic nature to [Dahlia and McQueen’s] relationship; she echoes a lot of his darker qualities and that’s why they go on this journey together.”

Bawden, who replaced “Glee” star Dianna Agron in the role, says that she “didn’t know the half of how extraordinary McQueen’s skills as a designer were, and how many collections he churned out each year” at both his own label as well as, for a time, Givenchy.

Of stepping in to Agron’s shoes, she says, “I loved what Dianna did with the role but the company was extremely supportive of me finding the role for myself.”

“I know it was a huge responsibility [to play Lee, the designer’s birth name],” says Wight, who bears an uncanny resemblance to McQueen, adding that “it was a conscious decision not to meet with any of Lee’s friends and family because it was said that nobody really knew the real McQueen.”

To research the role, Wight turned to YouTube videos of the designer, and it didn’t hurt that Wight was born and brought up about a mile from where McQueen was born, so the accent is spot on.

“I didn’t care about what the critics or my friends and family thought,” he says. “The only thing I cared about in taking the role was that Lee’s family and friends would see a truth and honesty in my portrayal. If I had their validation, I’d feel fulfilled.”

He says that McQueen’s nephew Gary McQueen and his sister were supportive “all the way through” and though they may not have “enjoyed it, they did believe it and said Lee would have liked it.”

Other characters include Mr. Hitchcock, the head cutter at Savile Row’s Anderson & Sheppard, where McQueen received his tailoring experience, Isabella Blow and Phillip Treacy, whom McQueen calls when Dahlia breaks in, and Arabella, a journalist.

Director John Caird, who is next in New York to direct “Daddy Longlegs,” says that before taking on “McQueen” he had little interest in fashion but that he was attracted to the play because it presented “a challenge and a chance to learn something new.”

“I was always very suspicious of fashion and thought it didn’t matter very much,” he says. “I wanted to know what it means; why fashion is so important. I didn’t realize what an exceptionally creative and artistic game it is. It’s no different to writing a play or making a painting.”

“I always liked the idea of mannequins, and how life-like they can be, so I wondered what would happen if some mannequins came to life and helped McQueen,” says Caird. “From that idea, it was a short step to having the mannequins as dancers and finding a choreographer.”

The costumes for the show were created by David Farley and, according to Caird, are “based on a reverence of McQueen and the line he used,” as opposed to studiously recreating McQueen’s work. There are no original McQueen pieces in the production because “they would have taken up the entire production budget.”

As it was to McQueen, music is a big part of the show and Farley Googled all the music McQueen used in his shows, many of which, including tracks by Björk and David Bowie, appear in the show’s soundtrack.

The show runs through Nov. 7.