By Samantha Conti and Miles Socha
with contributions from Monique Jessen
on September 20, 2010
View Slideshow 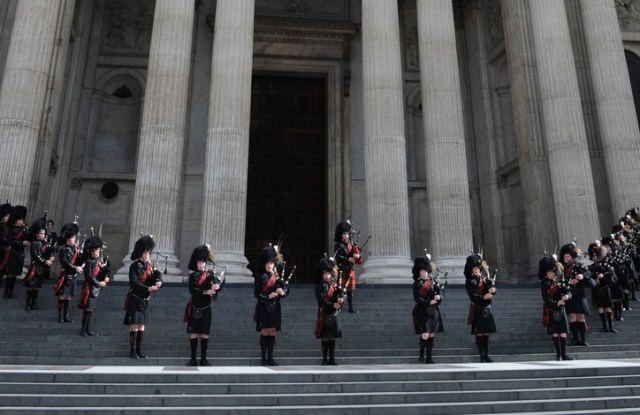 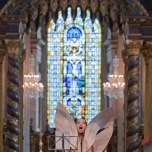 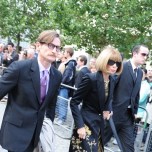 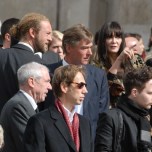 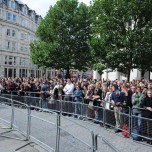 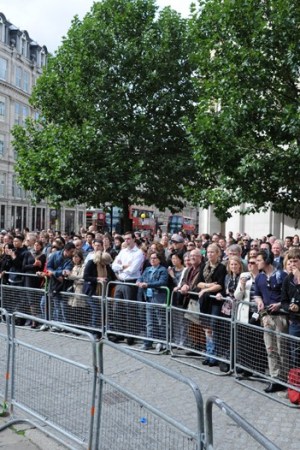 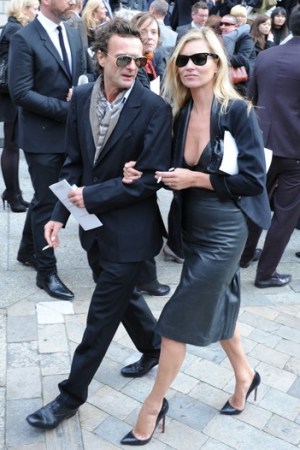 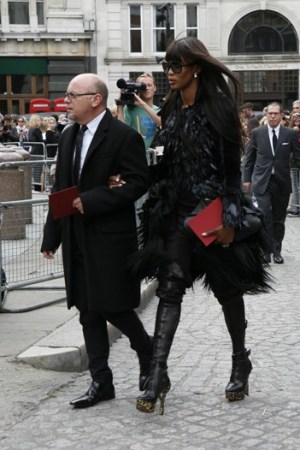 LONDON — “Little white flowers will never awaken you, not where the dark coach of sorrow has taken you.”

The haunting voice of Icelandic singer Björk reverberated through St. Paul’s Cathedral here Monday at a grand memorial service for the late Lee Alexander McQueen, who took his own life last February at age 40.

This story first appeared in the September 21, 2010 issue of WWD. Subscribe Today.

Dressed in an otherworldly McQueen outfit — a top of thin, molded wood resembling angel wings and a long feathered skirt — Björk poured into song a sense of loss, and the demons that haunted the British designer.

“It was a life lived in the public gaze, but it was as vulnerable and retiring as it was glamorous,” the Reverend Canon Giles Fraser told the 1,200 guests, who included Sarah Jessica Parker, Daphne Guinness, Kate Moss, Naomi Campbell, Karen Elson, Stella Tennant, Stella McCartney, Hussein Chalayan, Antonio Berardi, Roland Mouret, Philip Treacy and Shaun Leane. “Despite the dazzle of his world, he never forgot his East End roots and how much he owed to his loved ones,” said Fraser.

There was organ music by the composers Edward Elgar and César Franck; hymns by William Blake and John Newton, and Bible readings and prayers by McQueen’s nephews Mark McQueen and Gary Hulyer — all of which lent a somber tone to the event. Yet there were moments of levity as well, including the David Bailey portrait in the program of McQueen kicking up his heels in full Scottish regalia.

Speakers at the 70-minute service, held on the second-to-last day of London Fashion Week, exalted McQueen’s imagination and technical prowess, but didn’t shy away from his dark side, his fascination with the macabre, his salty humor and his acid tongue.

Between live performances by the composer and pianist Michael Nyman and the London Community Gospel Choir, the designer’s intimates and professional colleagues painted a picture of a man who lifted himself from a modest background to the pinnacle of international success.

Addressing the congregation, Leane recalled his first encounters with McQueen almost two decades ago, as he watched the designer “hammering away” at a sewing machine in a ramshackle studio, and producing delicate dresses that rivaled works of art. “From all that chaos came beauty,” he marveled.

Speaking from a podium, Suzy Menkes, fashion editor of the International Herald Tribune, shared the last words McQueen ever uttered to her — “But Suzy, bones are beautiful” — by way of explaining why his men’s collection, shown last January in Milan, was pavéd in artful arrangements of memento mori. “He called it his morbid side,” said Menkes.

McQueen also told Menkes his fashions and theatrical shows were largely autobiographical, angry when he was feeling angst in his personal life, which was often.

Caged ravens, wolves straining on leashes and “chillingly misogynist” shoes were all expressions of McQueen’s pain. “Yet his imagination and showmanship never drowned out his fabulous tailoring,” Menkes said. “He was an artist who just happened to work with clothing.”

In a speech peppered with early memories of McQueen’s penchant for last-minute cancellations and his “often savage tongue,” American Vogue editor in chief Anna Wintour called the designer a “complex and gifted young man” who worked out his dreams and horrors on fashion’s stage. “He never appeared much at ease with himself, and he didn’t care about the politics of fashion,” she said. “The world that he loved was inside the atelier.”

Wintour also recalled his impact on the fashion world at large. After he introduced his now-famous “bumsters” in 1996, “Everybody lowered their trousers everywhere,” she said. “His talent soared like the birds of his boyhood above us all.”

In her tribute, Annabelle Nielson admitted that her friend of 18 years could be “a little tricky,” but that he was the best man she had ever known. “He was loved by so many,” she said, “but felt loved by so few.”

After the service, the congregation — some of them smiling, others wiping away tears — gathered in the sunshine to listen to the National Youth Pipe Band of Scotland assembled on the cathedral steps. The musicians were dressed in black — with flourishes of red tartan — and the feathers on their tall, brimless hats fluttered in the breeze as they played.

Nyman, who played an acoustic piano solo during the memorial, remembered McQueen as a gracious man. “He commissioned a piece from me for the Paris collection where Kate Moss appeared as a hologram,” Nyman said after the service. “He never used it, and he called me to apologize, and asked me to go to the Bond Street store to pick something out for myself, which I never actually did. That was my only contact with him. It was a very moving experience to play today.”

“All of it was absolutely fitting, just beautiful, and typically Lee didn’t show up,” said Guinness with a smile from beneath her black veil, referring to the late designer’s tendency to cancel at the last minute, or pull a no-show. “I was like ‘Lee, where are you? You should be here.’”

“It was just beautiful and he would have loved it,” said Campbell, tottering on sky-high McQueen heels.

Like many female guests, Parker was decked out in McQueen. “This is new, this is fairly new,” she said, referring to her billowing cream dress and a rib-hugging black tuxedo jacket.

“It was perfect,” a rueful Parker said of the service. “I wouldn’t have missed this for anything in the world. It was just a wonderful way to remember him. It was just beautiful.”

Moss said she was moved by the service. “He would have loved it,” said the model, who was dressed in a black leather skirt and black jacket. She added that her abiding memory of McQueen was “his infectious laugh. We laughed together all the time.”