FLORENCE — Chinese fashion talents have been on the rise for the past few years. The LVMH Prize shortlisted seven Chinese designers in its 2015 edition and Shanghai Fashion Week has grown exponentially, offering a major platform for these Western-trained fashion designers to showcase their cross-cultural creations to the local audience.

Now Pitti Uomo has recognized this development and is bringing 10 Chinese men’s wear designers to Florence to introduce them to a much wider audience — a move that also could help take China’s fashion credibility to a new level.

In collaboration with the Shanghai Fashion Week Committee and curated by Labelhood, these designers will present their collections with a showcase at the Fortezza da Basso, accompanied by an exhibition of the works of acclaimed emerging fashion photographer Leslie Zhang, which will be curated by Dan Cui, former fashion director at GQ China, at Spazio Grotte.

The brands featured in the guest nation China special project are 8on8, Danshan, Ffixxed Studios, Percy Lau, Private Policy, Pronounce, Samuel Guì Yang, The Flocks, Staffonly and Untitlab. Pronounce will host a stand-alone show to present its spring 2020 collection and showcase a new Converse Jack Purcell collaboration on the runway.

“We hope that with a series of events spotlighting China, more attention can be drawn to this group of Chinese talents and ignite conversations between them and the rest of the fashion world, ” said Tasha Liu, founder of Labelhood, a Shanghai-based emerging talent support platform and retailer.

Here, a look at the 10 designers participating in the guest nation China special project. 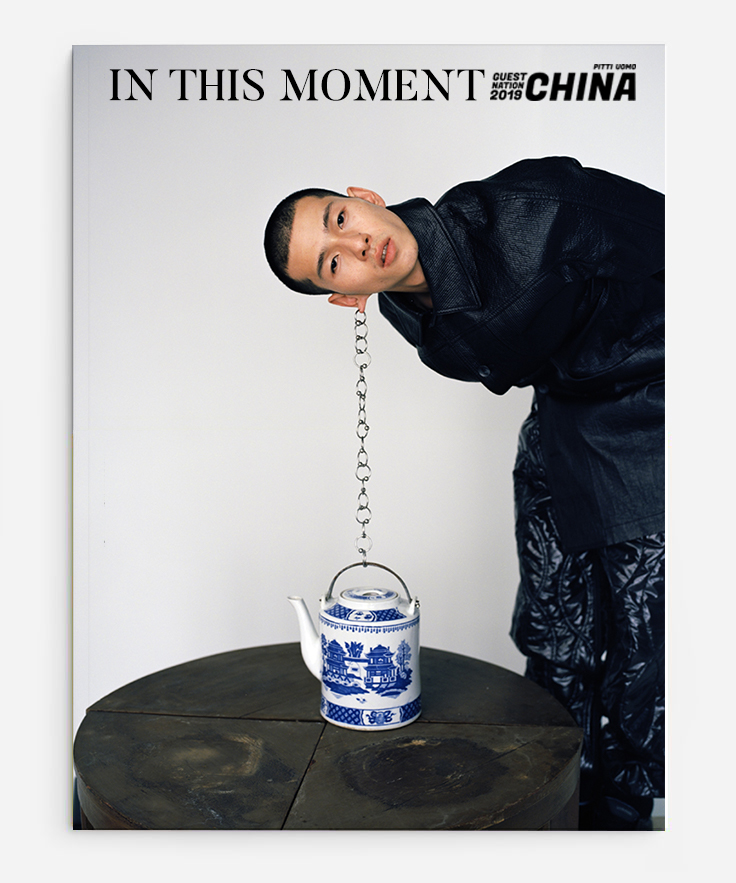 Featured as one of the top five talents to watch in Shanghai, designer Gong Li’s graduate collection at Central Saint Martins’ press show drew great industry attention and his collection was picked up by Lane Crawford. In 2017, Gong Li launched the men’s wear brand 8on8. The collection combines craftsmanship and modern interpretations in an interweaving of classic men’s wear, everyday streetwear and outdoor clothing. He showcased his spring 2020 collection during London Fashion Week Men’s with the support of GQ China.

“I want to express the modern Chinese vision and taste to the industry, raise brand awareness for the international market,” said Li of his goal at Pitti. “8on8 is a meeting point for city life from the past and buzzy energy of the younger generation. I use fresh cutting technique and tempered proportions combined with a mix of technical and traditional fabrics to provide a distinct offering for men, transcending and fusing the categories of contemporary sportswear and future tailoring.”

London-based men’s wear brand Danshan takes its name from the Chinese designer Danxia Liu and Hong Kong designer Shanpeng Huang. After graduating from Central Saint Martins in 2012 and working in the industry for some time, they launched their brand in 2016. The brand is supported by Sarabande: The Lee Alexander McQueen Foundation and has lined up a number of collaborative projects with talents from various artistic fields, experimenting with expression through sound, moving imagery and documentation.

“Danshan’s collections present a spirit of culture that creates a space for progressive masculinity to develop, celebrating the freedom that sensitivity can give men to reclaim their masculinity, in the hope of creating a more accepting world,” said Liu. “Our clothes are often made with satin and chiffon, the ’softer’ fabrics and those that are traditionally considered to be feminine. We look at ways to make a masculine silhouette become effeminate, without breaking the austere boundaries that define men’s wear.”

Ffixxed Studios was founded in 2010 by Fiona Lau and Kain Picken in the foothills of a Shenzhen suburb. “We make clothing in response to changing conditions for contemporary living, proposing laid back simplicity with an eclectic and sometimes playful aesthetic,” said Lau.

The duo relocated the entire office to Shanghai, where the Chinese designer fashion industry is concentrated. The ready-to-wear label evolves seasonally alongside other projects and collaborations that inform the evolution of the brand. Prioritizing movement and openness conceptually and in material and functional terms, Ffixxed Studios proposes a laid-back simplicity, emphasized by modern cutting and a fluid, eclectic aesthetic. The collections are shown during Tokyo, Paris and Shanghai fashion weeks and are available through select retailers internationally.

Percy Lau is an eyewear brand founded in Hong Kong in 2013. The founder was the youngest winner of the International Talent Support YKK Award in 2013. Her glasses are not just accessories, they invite the wearer to explore the world from an unusual perspective, to develop new ways in understanding our personality. Lau describes her brand as “beyond the future,” and she is trying to make an artificial reality app to add another dimension to the label’s portfolio.

Founded in New York by Haoran Li and Siying Qu, Private Policy is a genderless brand that incorporates New York youth culture into its DNA and is inspired by contemporary events, from social and political phenomena to environmental issues. Its non-binary streetwear aesthetic has garnered support from some of the industry’s most influential individuals, including Billie Eilish, Bella Hadid, Kendall Jenner, Ansel Elgort and Nick Jonas.

The brand was supported by GQ China and presented two collections at London Fashion Week: Men’s, and has been nominated by the CFDA as part of the “next step” program in the same year.

“We want to show how a young brand could innovate the modern fashion world as ‘news media.’ As an important part of the spring 2020 collection, we introduced recycled synthetic fabric, biodegradable fabric as well as upcycled pieces in order to echo our slogan ‘heart fashion, mind the world’ better, ” said Li.

Pronounce was founded in 2016 by Yushan Li and Jun Zhou with studios in Shanghai and Milan. Yushan graduated from the master’s fashion program at Central Saint Martins in 2015 and worked at Yeezy after graduating. Jun trained himself at Ermenegildo Zegna before graduating from the London College of Fashion and Istituto Marangoni.

Yushan and Jun share the same aesthetics, focusing on developing handcrafted heritage in relation to the modern wardrobe, combining east and west. Inspired by male and female stereotypes, the designers keep pushing the boundaries of the “gender-sharing” concept. The brand was the nominee for the Woolmark Prize International in 2017 and the winner of The Latest Fashion Buzz at Pitti Uomo that same year. Both designers are also in Forbes Asia’s “30 under 30” list.

Raised in Shenzhen before moving to the U.K. in 2006, Yang began studying at Central Saint Martins in 2009 and received an M.A. fashion degree in 2015. His interest, developed from a background in fine arts, is strongly catalyzed by the human form. “We are a design studio with roots in both London and Shanghai. The collections are marked by the duality of the team behind them. By mixing and merging Chinese and western codes, and historic and contemporary references, they create a language that both fits and challenges,” said Yang.

The brand is set to unveil its first men’s wear collection at Pitti and is designing the uniforms for the staff of Power Station of Art in Shanghai.

Shimo Zhou and Une Yea are the founders of the Shanghai-based men’s wear brand Staffonly. “A Staffonly man always has an abundance of curiosity and a sense of humor, and he is willing to break the boundaries and to explore the unknown area of the world,” said Zhou. The brand is committed to creating collections based on sharp concepts and innovative materials.

“It’s our third time participating in Pitti Uomo, and this will be a special one. It will be a very unique stage for the audience to know more about China as a new creative hub of men’s wear, with all the energy and diversity,” she said, adding that they are collaborating with an international sports label launching soon.

The Flocks was founded in 2016 by Chinese designer and retailer Nan Lang, cofounder of Dong Liang, now known as Labelhood. The brand gathers a group of young people who design apparel, accessories and objects for people for daily use. Each season The Flocks’ design inspiration is from young people’s attitude toward life and involves more designers from the young generation. The Flocks also organizes design experience projects and records the process in photos, videos and magazines, which further represent the youth image.

Untitlab is a footwear and accessories brand founded by Sans Peng, Tian Cai and Justin Zen. With a core design concept drawn from the background and sensibility of the founders, the brand looks to the intermediate stages of the creative process, breaking down boundaries and aiming to achieve unity through experimenting with materials and silhouettes. The brand takes its name from artists who do not name their works and instead invites the public to actively participate in the definition of individual use scenarios.

At Pitti Uomo, Peng said he would like to share and learn more about sustainable fashion. He also said the brand is doing a workshop where people can bring their unused stuff and by around August they will be turned into sandals in Shanghai.