The buzzy French men’s wear label, known for its straightforward, masculine style, is setting up its third unit in the French capital.

By Paulina Szmydke on May 8, 2014
View Slideshow 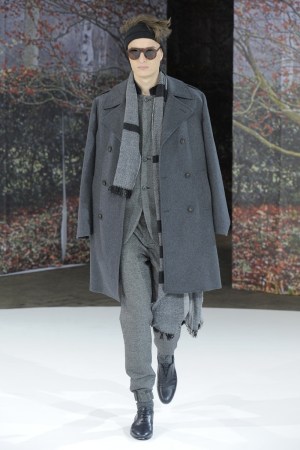 PARIS — Melinda Gloss is turning it up a notch. The buzzy French men’s wear label, known for its straightforward, masculine style, is setting up a flagship in Paris, its third unit in the French capital, to keep pace with its fast-growing business.

Slated to open in September, the venue is located on Boulevard des Filles-du-Calvaire in the upper Marais district, which has recently established itself as a new mecca for men’s fashion.

“The neighborhood is moving very fast and so is our brand,” explained Mathieu de Ménonville, who cofounded the label with Rémi de Laquintane in 2010.

Speaking about the label’s appetite for expansion, the duo, who originally studied philosophy at the Sorbonne, described the flagship as an opportunity to communicate the brand’s message and further close the gap between contemporary urbanwear and old-school luxury, its declared mission. “One of the things we have adopted from the luxury market is service. We want to offer the best service as a brand, because fashion is not just about buying clothes, but also about the experience that goes with it,” said de Ménonville.

At 1,200 square feet, nearly three times as large as the label’s existing Marais store on Rue de Saintonge, the flagship is to feature a space dedicated to a bespoke offering that has grown 40 percent in the last year, according to the founders. The unit, designed by architect Franklin Azzi, who previously lent his talent to designers Isabel Marant and Christophe Lemaire, is to be “quite masculine, but cozy, not too cold — kind of like a boudoir for men,” explained de Ménonville.

Still, the duo, which works only with a team of 10, intends to keep things simple. “We don’t want to have a suiting factory, but we feel that the old savoir-faire is something that is missing in the contemporary market,” said de Laquintane.

All its bespoke suits, starting at 900 euros, or $1,251 at current exchange, are manufactured in France in a small factory in Limoges, while an artisanal collaboration with Holland & Sherry, the British textile producer, provides exclusive fabrics. “What we like about bespoke is that you can’t cheat with it — you can’t make a good suit with a bad fabric,” explained de Laquintane, who’s in charge of design, adding: “We want our fashion to last, not do flashy prints which the wearer will get fed up with after four weeks.”

For the last three seasons, the label’s sales have increased by 50 percent, while its e-commerce business more than doubled between 2012 and 2013.

With 95 points of sales worldwide, Melinda Gloss’ largest retail market is still France, “but in wholesale terms, Japan has taken the lead,” de Ménonville noted. And with a new private investor on board — Alain Breau of Superga Invest — who took a minority stake in the brand in April, the brand’s development is expected to take on additional steam. “It’s not an investment group, obsessed with numbers, but a physical person with human feelings and love for the brand,” de Laquintane said. “We feel that this is more suitable for us at the moment.”

Within the next five years, a flagship in Japan or in the U.S., where the brand recently struck deals with Saks Fifth Avenue and American Rag, among others, is a likely step.