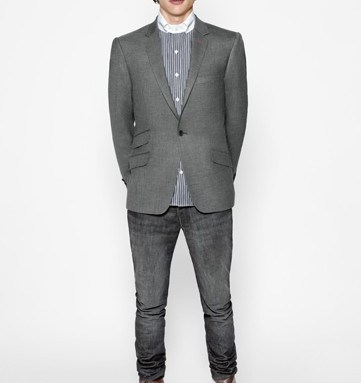 Fashion editors and retailers staying at the Hôtel Ritz for Paris Men’s Fashion Week will find up-and-coming label Bespoken camped out in the famed Ritz Bar from today until Saturday. The label, presenting its spring collection, is a collaboration between two groups of brothers: James, Sam and Liam Fayed, and Carlos and Paulo Goncalves.

The locale of the presentation isn’t an accident. The Fayed brothers are the sons of Ali Al-Fayed, who owns the Hôtel Ritz with his older brother, Mohamed Al-Fayed. The elder Al-Fayed siblings also control the Harrods department store, Harrods Aviation and the soccer club, among other businesses in Great Britain.

But don’t mistake the Fayed sons as dilettantes in the fashion business or pigeonhole them as beneficiaries of a moneyed bloodline. The three brothers have worked in the industry since they were teens, apprenticing at Turnbull & Asser, the clothier founded in 1885, which was acquired by Ali Al-Fayed in 1986.

“I think there’s the risk of them being perceived as socialites, and that’s the antithesis of what these guys are,” said Paulo Goncalves, who first met Sam Fayed when the latter answered a Craigslist ad for a drummer in Goncalves’ band. “They really grew up in the family business and I think that really kept them grounded.”

Liam Fayed, who just finished his junior year at Syracuse University, recalled working in the stockrooms of Turnbull & Asser stores. But Bespoken designs are clearly geared toward a more youthful, contemporary customer. Tailored jackets are cropped short, shirts have narrow, rounded collars and herringbone overcoats have trim silhouettes. Last spring, the company branched out into denim and accessories.

While the Fayed brothers are loathe to talk about their family connections, they don’t mind using them to produce their collections. Bespoken uses many of the same production resources as Turnbull & Asser, with the shirts made in the latter’s Gloucestershire facility, jackets hand cut in Norwich and ties produced in central London. The denim is made in the U.S. and features details such as Bespoken shirt fabric on the inside waistband. Shirts wholesale for $115 to $150, sport coats for $375, jeans for $125, trousers for $129, outerwear for $250 to $388 and ties for $63 to $78.

Bespoken made its debut at retail in fall 2008 at Harrods — the brothers didn’t reveal their identities to the buyers there as to not prejudice them — and Bloomingdale’s SoHo in New York. The latter has since expanded its buy to the 59th Street flagship, Chicago and San Francisco.

Last month, Bespoken signed New York’s Denise Williamson showroom as its global sales agent. Also working with the brand as a consultant is Nathan Bogle, an original co-founder of Rag & Bone, who exited that company over disagreements with fellow co-founder Marcus Wainwright.

Bespoken is officially based in London, but Carlos Goncalves, 39, is based in Los Angeles with his brother Paulo, 36. The former is an alumnus of Wall Street firms and oversees the financial aspects of Bespoken, while the latter left a career in advertising and handles the label’s marketing and branding. Sam Fayed, 23, graduated from UCLA film school last year, and is based in London and New York, where he does most of the design work. Liam, 21, is based in Syracuse and Europe, where he directs sourcing and production. James Fayed, 30, is located in New York, where he maintains a full-time job managing the New York branch of Turnbull & Asser.