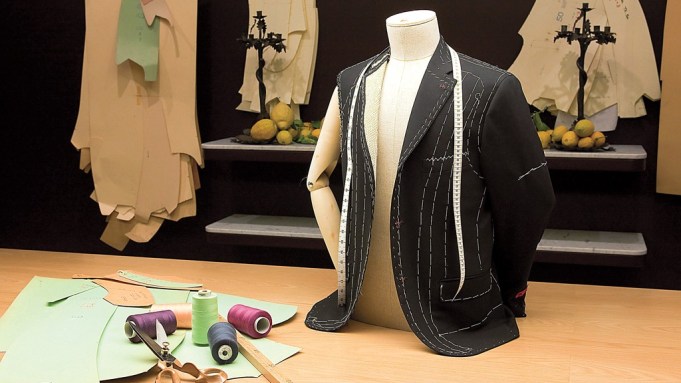 To quote the British writer Samuel Johnson, “It is in refinement and elegance that the civilized man differs from the savage.”

It would appear that the 19th-century Italian tailors who built the Neapolitan sartorial tradition took Johnson’s quote to heart. And more than 100 years later, men’s tailored clothing is still designed and manufactured in Italy by an army of skilled artisans, who balance the respect for tradition with stimuli coming from the contemporary world.

According to Sistema Moda Italia, in 2012 Italian men’s fashion business generated 8.6 billion euros, or $11.4 billion at current exchange, in revenues.

“In Naples, I went to the Isaia factory and the people working there surprised me for a few different reasons,” said Michael Williams, founder of the popular American men’s fashion blog A Continuous Lean. “First, because of the fact that so many generations of the same family have worked either for Isaia or in the tailoring trade in general. But, I was also stunned by the level of skills the craftsmen continue to possess and use to make such nice things. I have never been more moved in a factory — and I have been to factories all over the world — as I was at Isaia. It was very moving to see the appreciation for process and tradition there.”

Established in 1957 by Enrico Isaia and siblings Corrado and Rosario, Isaia is a key example of a small sartorial atelier that developed into an international business. The company, which is currently run by Enrico’s son Gianluca and counts a boutique in Milan along with four directly operated stores in Russia and Ukraine, generated revenues of 32.6 million euros, or $43 million at average exchange, last year. It aims to post revenues of 36 million euros, or $47.5 million, in 2013.

“Whatever product expansion we do, for us it’s extremely important to keep the production in Italy,” Gianluca Isaia said. “We have always had the goal to export the Italian sartorial tradition as well as the Neapolitan culture, because we strongly believe in the potential of our city — which is not just pizza and mandolins, but also counts a number of serious cultural and entrepreneurial projects.”

Isaia is located near Naples, in the small city of Casalnuovo, which is internationally known as the “tailors’ town.”

“When my father founded the company in 1957, 7,000 of Casalnuovo’s 14,000 citizens were tailors,” said Isaia, who acknowledged that even if it is a bit more complicated to find a skilled workforce today, “there are a lot of young people from our area who come to work with us and learn very quickly, because I think that they have this art in their DNA.”

Vincenzo Attolini, who started the business in 1930, forged the path of the Neapolitan tailoring style, breaking the rules of classic British tradition — at that time the only point of reference for men’s wear — inventing a new deconstructed jacket, for a look that was still extremely elegant yet fresh and more casual. Vincenzo Attolini’s grandsons Massimiliano and Giuseppe Attolini are currently at the helm of the company, where 150 tailors cut, sew and carve by hand 40 bespoke pieces every day.

Confirming the appeal of the brand on the international markets, Cesare Attolini, which owns a boutique in Naples, opened its first U.S. store on Madison Avenue in Manhattan last year. The U.S. is one of most important markets in terms of exports for Italian high-end tailoring companies.

“There’s a very direct quality association with ‘Made in Italy.’ In America, specifically, people hold the ‘Made in Italy’ label in high esteem because it represents something made by care using traditional methods,” Williams said. “American manufacturing has traditionally been more focused on durability and mass production, while Italy has concentrated more on quality materials and construction.”

According to Antonio De Matteis, chief executive officer of Kiton, the Naples-based tailored clothing company founded in 1956 by Ciro Paone, quality played a pivotal role in building the international success of the brand. “Products are definitely the best tools for the promotion of ‘Made In Italy,’” De Matteis said. “We have never compromised the quality of our products and we have always been loyal to our customers.”

Kiton, which registered a 20 percent increase in revenues in 2012, counts 700 employees and a big number of them are graduated from the tailoring school that the company founded in 2000.

Brioni, which was founded in Penne, Abruzzo, by master tailor Nazareno Fonticoli with the support of entrepreneur Gaetano Savini, is also among the tailoring men’s wear brands that a long time ago invested in education.

In 1985, the company founded Sartoria Nazareno Fonticoli, a four-year high school teaching students the basics of luxe Italian tailoring. Once graduated, the students intern at Brioni, where they practice and learn the company’s unique working method.

Brioni is expanding its business in a more fashion-oriented direction under men’s designer Brendan Mullane, the brand’s first creative director. The company was acquired in 2011 by French luxury conglomerate PPR — a deal that highlights the appeal of Italian high-end men’s wear labels for international groups.

“To succeed in the men’s fashion business, it’s fundamental to find the perfect combination between wearability and high-quality fabrics,” said Narduzzi, who also highlighted the importance of keeping a constant eye on pricing. “The real ‘Made in Italy’ [merchandise], realized with the proper expertise, features accessible prices that are totally in line with the markets’ needs.”

And the bottom line is, after all, business. Since its first edition in 1972, Florence-based international trade show Pitti Uomo has boosted both the business and the international visibility of Italian tailored clothing companies.

“From the beginning, we have worked to support Italian companies focused on formal men’s wear,” said Raffaello Napoleone, ceo of Pitti Uomo parent Pitti Immagine, referring to firms such as Corneliani, Canali and Pal Zileri. “All the big global groups, which are our country’s driving forces, owe a lot to Pitti, because it has been an important place to train themselves and get prepared to face international markets.”