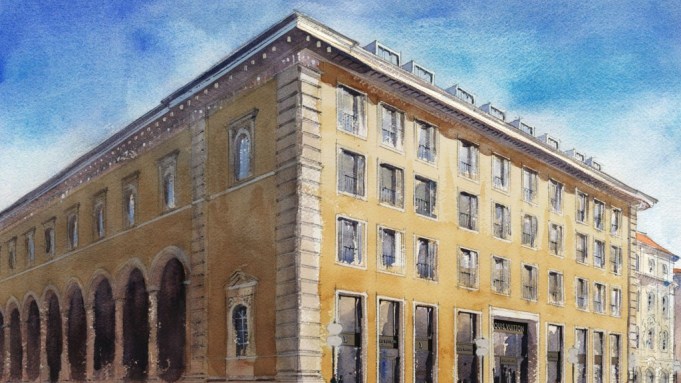 PARIS — Taking its travel heritage to a new zenith, Louis Vuitton is opening two key European flagships that are practically tourist attractions in their own right.

Located in historic buildings and loaded with cultural displays and art works, the sprawling new “Maisons” in Venice and Munich are meant to deliver nothing short of a transporting, even “emotional” experience, according to Michael Burke, Vuitton’s chairman and chief executive officer.

“Our challenge today is to continue offering exceptional and unforgettable experiences in each one of our stores,” Burke told WWD in one of his first interviews since exiting Bulgari in mid-December to take the helm of the French leather goods brand. “Our clients today seek personalized services and individualized sophistication.”

Burke stressed that “our focus today is the qualitative development of our retail network,” echoing what LVMH Moët Hennessy Louis Vuitton chairman and ceo Bernard Arnault in January described as a more “elitist” direction for Vuitton amid a cooling in demand for luxury goods, particularly in Asia.

Speaking at a results presentation in January, Arnault said Vuitton would rein in store openings in 2013 as it did last year, instead focusing efforts on refurbishing and upgrading existing units and providing “superior” customer service. Vuitton counts 462 stores in the world.

Arnault also noted it was “vital to heighten the quality lead” by emphasizing Vuitton’s upscale leather bags, rather than monogrammed canvas.

The new 15,900-square-foot Venice store, which opened to the public over the weekend, is housed in a former 1,100-seat cinema established in 1908 steps away from the famous Piazza San Marco. The three-story Munich unit, slated to open on Wednesday, takes over the Residenzpost, inaugurated as a Royal Post Office in 1838, some 14 years before Vuitton was founded.

Both units will contain an Espace Louis Vuitton — an independent gallery that hosts two or three exhibitions a year — along with numerous specialized products and services. They replace smaller locations in their respective cities.

The Munich Maison offers Vuitton’s Haute Maroquinerie service — first introduced in Milan in 2011 and allowing clients to create bespoke versions of Vuitton bags — along with made-to-order men’s belts and shoes.

A bookstore is among the departments at the sprawling Venice Maison, which is also the global launching point for the Petit Noé bag, a diminutive version of a drawstring style first created in 1932. The store also will offer a limited edition of 10 gold charms in the form of a carnival mask.

“Our clients’ expectations can be summed up in one word: emotion,” Burke said, noting that emotion can be evoked by “exceptional quality,” unique craftsmanship, precious materials or personalized products.

“Our Maisons offer the perfect location and framework for us to offer this kind of emotion to our clients,” he asserted, adding that they “were conceived as a travel destination in itself, allowing clients to make unexpected discoveries.”

Vuitton anoints a store a Maison when it carries all of its product categories, which today span luggage, leather goods, ready-to-wear, shoes, accessories, watches and jewelry. Maisons also offer cultural diversions such as the Espace galleries and bookshops.

Asked if these attractions were designed to increase traffic and convert visits into transactions, Burke said exhibitions “are not directly related to our business and this is not at all our aim.”

Vuitton opened its first Espace gallery in 2006 in Paris and has since added ones in Hong Kong, Taipei, Tokyo and Singapore.

“We have a strong passion for creation at Louis Vuitton and we feel it is important to foster creativity whenever we can. It is also important to underline that each Espace Louis Vuitton is strongly implicated in the cultural life of the local community,” he explained. “Stepping inside a Louis Vuitton Maison should allow you to make personal discoveries and encounters.”

These include interactions with merchandise galore, which include yachting fashions in the LV Cup corner in Venice, and an array of writing instruments in Munich.

The new Venice store accentuates Vuitton’s ties to the Veneto region, a cradle of elite shoemaking since the 13th century. Vuitton opened its shoe facility in Fiesso d’Artico in 2001, and today it employs about 370 people.

A striped canvas trunk from 1885, plastered with labels from hotels around the world, is to go on display for the opening. Its famous owner was Carlos de Beistegui, an eccentric millionaire and art collector who hosted what was dubbed the “ballo de secolo,” or “party of the century,” in the Palazzo Labia back in 1951.

Vuitton contributed to the restoration of the Venice Pavilion in the Biennale Gardens and has pledged to continue preserving local treasures.

Burke noted that the Espace in Venice would be dedicated to historical masterpieces, and that Vuitton partnered with the Fondazione Musei Civici Veneziani to restore a series of works owned by local museums.

“For each exhibition, we will ask a contemporary artist to inspire himself or herself from one of the restored pieces to create a new artwork,” Burke said. “We like the idea of this inspiring dialogue between past and present.”

The first exhibition is slated to open June 1 in tandem with the 55th Biennale. The show will feature a Tony Oursler installation juxtaposed with “Death of Othello” by Pomeo Molmenti.

Vuitton operates two other stores in the Veneto region — in Padova and Verona — and Burke described Italy as a key market for the brand, despite the country’s enduring economic and political woes. The company opened a Maison in Rome last year, also housed in what was once an iconic movie theater.

Burke called the Venice opening “a sign of confidence we have in this market,” noting that Italian clients appreciate its “values of heritage and incomparable craftsmanship.”

“We have been able to strengthen our presence in Italy since 1984, and now our challenge is to personalize our customer service in each destination, each city and each store,” he said.

Features of the Venice Maison, designed by American architect Peter Marino, include a Murano glass chandelier by Fernando and Humberto Campana and a painting by Jean-François Rauzier. The facade, constructed by architect Brenno del Giudice and featuring a relief of a winged lion, dates back to 1936.

Vuitton plans other projects in Italy this year. This summer, it plans to open a pop-up unit in the Tuscan resort of Forte dei Marmi, and expand its store in Capri.

Vuitton has been present in Munich for more than 35 years, and the southern city was its first foothold in Germany. Burke noted that the new 13,800-square-foot location, also designed by Marino, would offer “substantially enlarged” areas for men’s and women’s ranges, fine jewelry and an extended bouquet of services.

Key architectural features include a central staircase that gradually morphs from dark wood in the basement men’s area, to medium-toned woods for the ground floor leather goods, accessories, jewelry and luggage, yielding to paler woods for the women’s area on the first floor. A pale gold mesh developed especially for Munich runs along the facade and part of the staircase wall.

Given the building’s provenance, Vuitton opted to bring its new Ecriture range of pens, stationery and writing accessories to the former postal palace, one of Germany’s first. It will also display a selection of historic books on Munich and its architecture along with Germany’s first postage stamp, the Schwarze Einser, issued at the Residenzpost in 1849.

The Espace gallery in Munich is to be inaugurated later in the year and showcase the works of local institutions, artists and collectors, Burke said.

Vuitton has partnered with Kino Der Kunst, a film and art festival running from Wednesday to Sunday, and it is sponsoring an annual film prize worth 10,000 euros, or $13,215 at current exchange. The first winner is Egyptian artist Wael Shawky for his “The Cabaret Crusades” made with a cast of ceramic marionettes.

Vuitton opened its first store in Munich on the Maximilianstrasse in 1997. Today there are 11 stores in Germany.

Burke noted that “tourism is steadily increasing in Munich and thus contributing to the local economy.” However, he insisted that the two new European Maisons were not dependent on tourist flows.

Vuitton is slated to open its first store in Poland, in the city of Warsaw, at end of June, Burke noted.