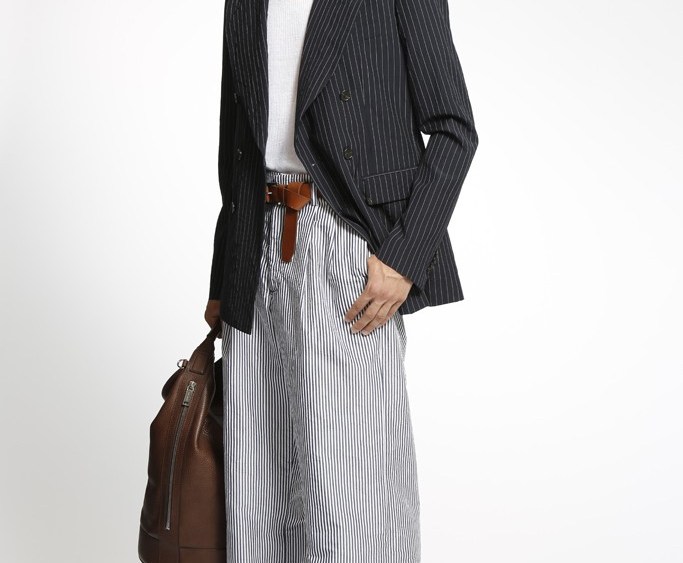 Michael Kors is a renegade.

He broke with the rest of the designer pack by opting to show his spring 2014 men’s collection at his New York showroom in July instead of waiting for New York Fashion Week, citing a disconnect in the dates.

“That’s the women’s calendar,” he said of waiting until after Labor Day. “We’re opening the line for sale now. Showing the clothes in September doesn’t make sense.” He said in the past, when he would show men’s and women’s together on the same runway, he found himself putting retailers off, saying, “Wait, wait, the show’s coming — save some money for our clothes. But that logic is bizarre. I would rather stores see the line when they’re in their fashion mojo.”

Stressing that he wasn’t trying to create a “calendar revolution,” Kors said he doesn’t necessarily support the creation of a separate men’s fashion week in New York and isn’t ready to commit to a “full-tilt runway presentation” for his men’s line — “it depends on the season. But we want the people to see the clothes up close, and this allows buyers to see the complete collection and not have to wait for the runway show.”

A few men’s pieces may be sprinkled in on the runway during his show in September, but those will only be to show a full representation of the brand.

Channeling his Hollywood pedigree, the “Project Runway” judge said his spring line was reminiscent of David Bowie meets Cary Grant meets Ryan Gosling. For Kors, this is a season that was “about convergences,” where tailored clothing and pajamas converge into a relaxed yet sophisticated conglomerate.

“The most luxurious becomes the most casual,” he said, pointing to double-faced sweatshirts in cashmere and cotton, pin-striped suits in crinkled wool and waxed linen anoraks. “The most casual things are the most indulgent. It’s yin and yang.”

He said the challenge is for men to “dress easy and comfortably but still be polished and sophisticated.” He addressed this with key looks that included sleeveless blazers, oxford pleated wide-leg trousers, suede trenches, indigo cotton Shaker pullover sweaters and an assortment of leather and hemp bags.

“It’s more relaxed,” Kors said. “If I see another man on the street in skinny pants that don’t fit him, [I’m going to scream.] It’s time to loosen up.”

Many of the pant models featured a high waist, a look that Kors called the “anti-Bieber. Men have forgotten where their waists are,” he said. The defined waists, that he encircled with oversize belts, worked well with the battle jackets and bombers.

Kors also offered pieces that have taken a back seat of late, such as double-breasted blazers. “Most guys haven’t worn double-breasteds in ages, and if they’re 25, they’ve never worn them.” Kors’ offering included Bengal stripes in crushed wool or white linen. “We have to give him a reason to buy something new,” he said.

That includes such men’s wear staples as the seersucker suit, shown with wide-leg pants. “Why not ratchet it up and make it cool?” he said. “Modern New Orleans in summer.”

Confessing that he is “addicted to blue,” Kors offered the color in a variety of hues, from the light shade of the seersucker stripe to the deeper indigo of a denim blazer, cotton pullover and denim-leather trench.

His outerwear choices included “trenches that got short and anoraks that got long.” They were paired with waxed linen cargo pants in a slim fit or hemp linen pleated shorts.

Kors also offered a selection of accessories such as a utilitarian take on the duffle and gym bags in linen, leather and denim. “I’m playing with the whole utility bag idea,” he said, noting that a lot of women have been buying the men’s bags.

He said his men’s wear customer can be the husband or partner of the Michael Kors woman or just a guy seeking a balance between youthfulness and sophistication. This includes men “of ‘a certain age’ who don’t want to look like papa. They’re international, they’re in shape, they travel. They want to look polished and comfortable.”

He ended his presentation by “playing around with dots.” Noting that there’s always a “challenge of men with pattern,” he said, “fashion folks fall in love with it and then reality sets in. So mixing of dots is one way to do it.”

Asked to sum up what he thinks of men’s wear today, Kors said he sees a “loosening of the rules. It used to be that men dressed differently for their age and had separate closets for weekend and work. But now the climate is demented and the idea of seasonality is gone. We’re all living fast. It’s an exciting time. Guys want to look great, and they’re interested in fashion but they’re not victims. The rules broke for women first, and now they’ve broken for guys.”