The designer unveiled his largest Lifestyle store in the world on Thursday. 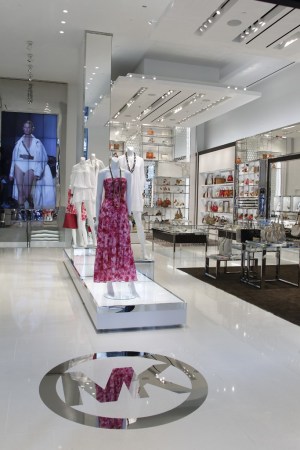 NEW YORK — Michael Kors is spreading out on Madison Avenue.

The designer unveiled his largest Lifestyle store in the world on Madison Avenue and 60th Street on Thursday. The 6,655-square-foot flagship at 667 Madison Avenue is double the size of the company’s original Madison Avenue store, which opened in 2009 and was next door. Kors has taken over the neighboring space, which was formerly a Steuben store.

The two-story flagship has a strong focus on women’s accessories, with handbags, small leather goods, footwear, eyewear, watches and fragrance prominently featured on the first level. Michael Michael Kors ready-to-wear is showcased on the lower level.

He said the accessories area represents 65 percent of the space, and women’s rtw is 35 percent. Some Collection handbags, for example, are displayed behind glass wall displays, while others are featured with the rest of the merchandise. Michael Michael Kors handbags start at $198, while Collection handbags start at $695. Idol noted that the store contains the firm’s largest presentation of rtw in a Michael Kors Lifestyle store.

Kors, which went public in December, has been on an aggressive retail track the last few years. At the end of 2011, Kors had a presence in 74 countries, with 231 company-owned and 59 licensed stores and concessions globally. The company said in February that it plans to open about 30 to 40 more stores in North America, 10 to 15 stores in Europe and 10 in Japan in fiscal 2013. The company declined to comment Thursday on the status of those plans.

The Madison Avenue flagship represents the company’s sixth store in Manhattan and its second on Madison Avenue. “We are constantly looking for new locations in New York City. That being said, it’s always about finding the perfect location in the right neighborhood,” said Idol.

“The opportunity to expand our Madison Avenue Lifestyle store to showcase a broader selection of my different collections in a space with such unique architectural qualities is a dream come true,” said the designer. “The location is perfect for both our New York customers and our global customers — Madison Avenue is truly my backyard.”

Kors officials declined to give first-year sales expectations for the store. As previously reported, Kors’ stores average about $1,700 a square foot, which is high for the industry, but Idol has never confirmed that figure.

Kors continues to push on both the international and domestic front. Its fleet of stores are located in such cities as Beverly Hills, Chicago, London, Milan, Paris, Munich, Istanbul, Dubai, Seoul, Tokyo and Hong Kong. In the past week alone, the company has opened stores in Madrid and Taipei, as well as the Madison Avenue unit. Kors plans to open its largest flagship in China, in Shanghai, next spring.

To kick off the new Madison Avenue store, Kors has enlisted Leandra Medine of The Man Repeller, who shot video footage of the frenzied hours leading up to the opening. The videos began running Thursday on Kors’ digital platforms, including its YouTube channel, Destination Kors, Facebook, Twitter, Pinterest and Instagram. The video is also expected to serve as a guide to put together the season’s looks, with Medine serving as guest stylist. Medine speed-styled mannequins and displays, all with the Man Repeller twist.

“The Man Repeller’s style sense is chic, cool and always eclectic, and I’m sure she’ll have a million and one fresh ideas on how to wear Michael Kors,” said the designer. “By capturing that experience on video, our fans around the world can feel like they’re in New York and part of the action.”