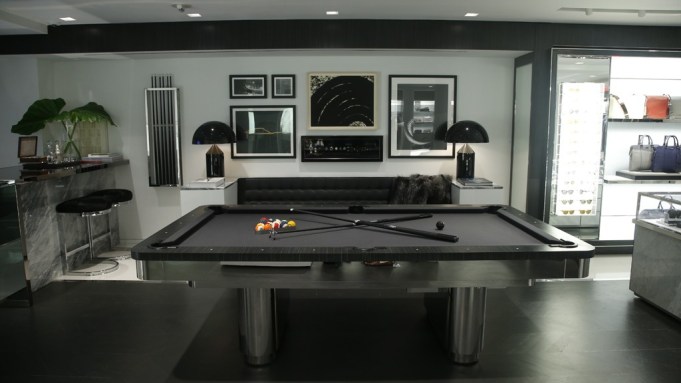 Nearly 35 years of practice, a wildly successful initial public offering and 509 freestanding stores (not to mention another 194 licensed ones) worldwide in the case of Michael Kors, who recently opened his biggest store to date at 520 Broadway here, a three-story, 22,000-square-foot behemoth that neighbors Uniqlo and Topshop. It is a defacto Michael Kors emporium, marking a series of firsts for the designer’s retail operations, not only in square footage terms. It’s the first Kors store to house the men’s collection and the first time men’s shoes are available at retail. The entire men’s concept has its own floor, the 4,000-square-foot lower level. There’s also an entire floor dedicated to accessories from Michael Kors Collection and Michael Michael Kors, including watches, jewelry, eyewear and fragrance, and the first official shoe salon.

The men’s floor is the real novelty in the store, though the designer doesn’t consider it the anchor. “Men have never been able to walk into our store and find the product and shop the same as women shopping,” said Kors. “I’ve always been one of the few designers who has always had men on the runway. We’ve always mixed men and women into our ad campaign. I’m thinking about a couple in our life. It’s a story I’ve been telling, but I’ve never told it at retail before.”

There is a men’s suit shop and exclusive product, including the slimmer cut 520 suit style.

More freestanding men’s stores are planned to open in the next year, though SoHo is the ultimate test market. “We had been looking for the right time and place to introduce the entire men’s collection under one roof,” said John Idol, Kors chairman and chief executive officer. “When we found the SoHo space, we knew this was it — it’s our largest store in the world, in the city where we started, and it’s clearly a great platform for growing our men’s business.”

But the opening of the SoHo superstore comes in the midst of a comparable-store sales slowdown in the U.S. The company reported a North American comps gain of 6.8 percent for the third quarter — healthy by most standards — but a continued slowdown from a 10.8 percent comp-store sales gain in the second quarter and the first quarter’s 18.7 percent rise.

“We’re planning to open several larger-format stores within the next year—on Regent Street in London, on Biblioteksgatan in Stockholm, and in Tokyo’s Ginza district. All three are being designed to showcase multiple product categories. These stores will give us the opportunity to highlight and expand upon categories we’re especially focused on right now, specifically the men’s business and women’s footwear and ready-to-wear. The Regent Street and Ginza stores will also carry Michael Kors Collection ready-to-wear and accessories, offering customers a 360-degree experience.”

As for the Broadway store, the entire three-floor unit was designed by the in-house team, in a style that Kors calls “optimistic clean.” There are some men’s specific touches, such as chevron flooring in gray oak bordered by white marble, black embossed leather wall coverings, gray-marble display cases, black-and-white photography, a Richard Serra painting, pool table and midcentury furniture, but otherwise the aesthetic is within the Kors vocabulary. “There’s no lime green shag carpeting,” the designer said. By comparison, the women’s section is brighter, shinier with vintage Murano glass Sputnik chandeliers, sleek metal fixtures, mirrored surfaces and glossy, large-scale photographs.

This is his eighth store in Manhattan, but Broadway in SoHo is a different game from the other neighborhoods he has covered. The foot traffic is immense, even if most of the retailers on the stretch don’t represent classic luxury. On this particular portion of the avenue, there is H&M, Zara, Victoria’s Secret and Bloomingdale’s. The back of Prada’s store opens onto Broadway (and Mercer Street), as a member of Kors’ public relations team pointed out. Asked if he ever imagined himself opening a store in this neck of the woods, Kors said, “The funny thing for me is, no — certainly 20 years ago, 10 years ago even, I wouldn’t have thought [I’d open a store on Broadway]. But what’s interesting about Broadway is the wide array of people, which has been our modus operandi since we started our lifestyle stores. I think it’s just a change in how people shop. People mix prices, they mix seasons.

“This store really is allowing us to truly show people the breadth of virtually everything we do,” he added.

Everything with the exception of women’s designer ready-to-wear and accessories, which are not among the vast mix of merchandise on Broadway. The plan for the fall is to transition the Kors store on Prince Street to a women’s collection store, where a different environment is necessary. So come fall, said Kors, “You will be able to have a fabulous hamburger and go around the corner and have some caviar.”