The designer hits town for Fashion's Night Out and a store opening. 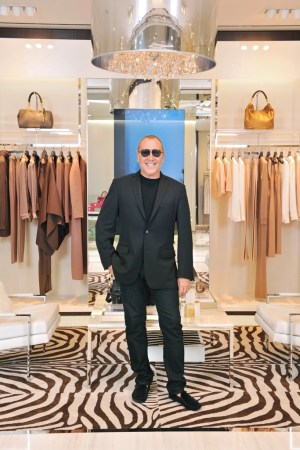 TOKYO — Michael Kors, who struck a pose with the Rockettes during New York’s Fashion’s Night Out back in September, is looking forward to a more low-key edition of the event here on Saturday.

“I will not be singing or dancing. I’m done. My entertainment days at FNO are finished,” the designer said in an interview at a cafe next to his new store in the Roppongi district. Showmanship aside, this particular incarnation of the event, which is likely be less rowdy than what was seen elsewhere thanks to a Japanese respect of order, is especially significant given the psychological impact of the March earthquake, he explained.

“If you find something that changes your spirit, it’s great for you personally, it’s great for the economy, for the country and for the city,” he said, clad in a black T-shirt, jacket and dark jeans.

Kors is bringing Jennifer Hudson over to make a personal appearance at his other store on Omotesando Avenue on Saturday. Later that night, Hudson will perform at an exclusive party at the U.S. Ambassador’s residence.

Kors created a limited edition Hamilton handbag and two matching wallets in dark pink matte-embossed python and adorned with “Michael [Hearts] Japan” charms for FNO. Proceeds from the line, which will be sold at Kors stores in Japan, will go to the Japanese Red Cross’ earthquake relief efforts.

“There’s still such a need to raise money,” he said, adding that the house already has many orders for the items.

Kors is still building his business in Japan, where he has a network of eight stores, including the two freestanding units on Omotesando and in Roppongi, which opened last month. The company took control of its Japanese business at the end of last year, ending an agreement with Onward Kashiyama Co. Ltd. Kors said he thinks Tokyo could support several more stores, drawing comparisons with his 10 stores in Los Angeles and six in Manhattan.

“With our clothes, so much of what we do is about how things are finished, the quality, the fabric, and the Japanese customer really understands. They look at every seam, they look at the detailing. They love fashion but they’re not victims. It has to be made beautifully,” he said.

The designer, who stopped midinterview to pose for snaps with a pair of women who recognized him as they emerged from his store with large shopping bags, talked about his love of the country and its culture.

“There’s kind of the craving for new but also then the respect for the old. It’s both. It’s kind of Michael Kors-y in that respect because I’m always curious about what’s next and what’s new but I do think people crave heritage,” he said.

Kors and his husband, Lance Le Pere, spent part of Thursday touring the historical Tokyo neighborhood of Asakusa that features traditional shops and wooden houses. At one point they witnessed a parade to commemorate the public holiday of “culture day.”

“We kind of got transfixed watching one group of women dressed as swans walk by,” he said. “It was beautiful.”

He also spoke enthusiastically about the Roppongi Hills shopping development that houses his new store. The area, which is a haven for expats, has an international vibe and Kors said he had been eyeing the neighborhood for a while.

“It’s very design-conscious but understated and luxurious and totally different than Omotesando, which is much younger,” he said, explaining that he has come to know two different customer bases in his two flagships here. “[The Roppongi customer is] definitely a world traveler. She’s familiar with the brand from trips to Paris, trips to New York. She’s very plugged in. She knows the pieces.…Omotesando is fast item-y, younger and more predominantly Japanese.”

He also noted that Japanese consumers, particularly after the March earthquake, are more conscious about quality.

“I think the idea of disposable kind of seems frivolous. I think that you’re seeing people really look for things that have versatility, longevity,” Kors said.

The designer came to Tokyo via Southeast Asia, where he attended the opening of a new store in Kuala Lumpur and visited a recently opened unit in Singapore. He drew parallels between those markets and Japan and said he feels that customers around the world are increasingly similar in their tastes, thanks mainly to the Internet.

“Here we are in Kuala Lumpur, it couldn’t be hotter, it’s tropical ridiculousness and the same pieces that are successful everywhere were successful [there],” he said. “The world is shrinking.”

Before leaving Tokyo on Sunday, Kors said he wants to head to Harajuku to check out the outlandish youth fashion and the shopping mall Laforet, one of his favorite spots in the city.

“I love that you switch tribes by floor. You’re on the Goth floor, then, oh, well now we’re done with Goth, let’s go Lolita. Nope, let’s go surfer,” he said. “Young people here, they’re the greatest street theater in the world. They make London and Shanghai and Paris and New York seem mild.”

Kors’ single lament seemed to be not being able to find a certain antique store he went to on a past trip. At that time, he bought a bowl and only later did he discover that it is extremely valuable and dated back to the 17th century. Someone finally explained to him that it is meant to be used for offerings and asked him if he had it on display in his home.