Michael Kors: On Singapore, Seoul and the Politics of Style

The designer is making the rounds in Asia, hanging out with Kate Hudson, dispensing sound bites on Melania Trump and snagging a namesake orchid.

By Amanda Kaiser
with contributions from Crystal Tai
on November 15, 2016
View Slideshow 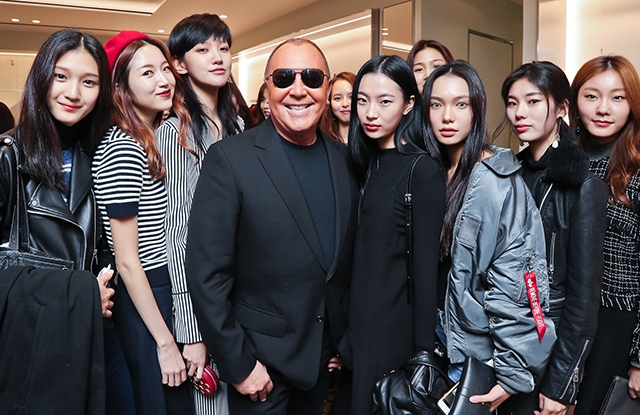 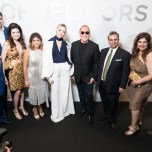 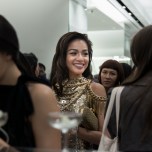 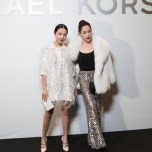 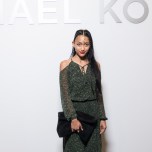 SINGAPORE — This city-state has two guests of honor at the moment: Michael Kors and his signature aviator shades.

“I could walk down Orchard Road without my glasses and no one knows it’s me. But when I wear my glasses, everyone says: ‘Oh, Michael Kors is in Singapore,’” the designer told a crowd gathered at School of the Arts Singapore on Tuesday.

Singapore is definitely aware of the designer’s presence — so much so that it named a variety of purple and white orchid after him. He joins an exclusive club of those who have nabbed the botanical honor, who also include the Duke and Duchess of Cambridge, Sir Elton John and Jane Goodall. Kors wants to plant his namesake flower in the garden of the house he is building in Florida. Now his team is trying to figure out how to get one of the plants into the U.S. and the designer is doing a bit of scheming in case he faces any thorny import restrictions.

“The [Singapore Botanic Gardens] has to tell you how and then the government has to tell you how to get it in. Because this will be like Betsy Bloomingdale being arrested with her smuggled Christian Dior dresses,” he said during an interview at the colonial-style Raffles Hotel. “I don’t want to be arrested…. I need it to be believable. I’ll wear it behind my ear.”

Kors is in town to celebrate the brand’s new flagship at the Mandarin Gallery. The 6,957-square-foot store, which opened during the summer, is the brand’s largest in Southeast Asia. Kors hosted an in-store cocktail reception Tuesday evening and a dinner at Wolfgang Puck’s Cut with Kate Hudson in attendance. Over the weekend, he feted new stores in Seoul.

While Singapore and Seoul are very different cities in terms of climate and culture, Kors sees some similarities. Both possess a large, young, experimental consumer base that is willing to take chances and try new things, he observed.

“[In Singapore] they certainly have figured out a way to experiment with fashion, even though they are dealing with tropical heat much more so than any American tropical place. Flip-flops are not the end-all-be-all here,” he said, as a brief but intense rainstorm raged outside the hotel. “Being in Seoul, just watching the people on the street, just the people watching is brilliant…Korea has, I think, a huge influence in Asia on pop culture and I think fashion is hooked to pop culture.”

The designer made sure to point out that his observation of those cities is equally true for women as it is for men, which is significant for his brand as it is making a major push into men’s wear. The Singapore flagship is the first store in Southeast Asia to carry the men’s collection. Kors said he believes his approach to men’s wear, a hybrid of traditional tailoring and relaxed weekendwear, should do well here.

“I think that’s kind of ideal for the lifestyle in this part of the world because it’s formal enough for men to wear it and still feel comfortable, but then it’s polished enough for him to wear to the office,” he said.

While Kors has made several trips to Singapore over the years, this was Hudson’s first visit and she spent much of it eating. During her whirlwind tour she hit up food markets and the famed Shinji by Kanesaka Japanese restaurant at the Raffles Hotel. “I’ve had an amazing culinary experience,” said the actress, who appears in the upcoming film “Marshall,” a biopic of Supreme Court justice Thurgood Marshall.

Asia wasn’t the only talking point for Kors, whose trip came on the heels of perhaps the most divisive and acrimonious presidential election in American history. While he didn’t delve into specifics on president-elect Donald Trump or Hillary Clinton (although he was a vocal Clinton supporter during the campaign), he expressed relief that the election is finally over.

“I think that now people can sort of slowly get back to their life and, as part of their life, being able to get out and shop and think about everything else, rather than a 24-hour news cycle about the election,” he said.

Kors’ clothes played a featured role on both sides of the political slugfest. Clinton, Michelle Obama, Melania Trump and Ivanka Trump have all worn the designer at various points during the election cycle and Kors said he believes his brand transcends political persuasions.

“I think that, you know, we design clothes that are for busy women who quite honestly need to look great and don’t want to have to think about it too much and I think that quite honestly has no party affiliation,” he said.

As for future First Lady Melania Trump and her style, Kors seems to be playing a waiting game of sorts.

“I’m sure she’ll carve it out,” he said of the woman whose Gucci pussy-bow blouse became a major talking point of her husband’s colorful and controversial campaign. “She knows herself, knows what works on her. So we’ll see how she carves it out.”

Earlier Tuesday, former CNN fashion correspondent Alina Cho hosted a conversation with the designer at SOTA fashion school. Kors traced the trajectory of his life and 35-year career, from his precocious childhood days on Long Island when he insisted his mother streamline her wedding dress by removing numerous superfluous bows to a swoon-worthy moment waiting on Jackie O as a sales clerk in Manhattan, his rise to TV stardom on “Project Runway” to ringing the bell at his company’s trading debut on the New York Stock Exchange in 2011 following its blockbuster initial public offering.

“My mom was there and my mother said to me: ‘Oh my god, this is even more fabulous than your bar mitzvah.’ And my bar mitzvah was fabulous,” he said of the stock-market festivities, delivering one of many zingers that kept the crowd of students and journalists chuckling through the hour-long talk.

Other notable soundbites came later in the chat when Cho asked the designer which celebrity Kors would like to dress who he hasn’t so far — a short list considering Kors’ extensive portfolio of red carpet moments featuring the likes of  Jennifer Lopez, Gwyneth Paltrow and, of course, Hudson.

“Queen Elizabeth,” he said after a moment’s hesitation.

The designer also mused about the actors most suitable to play him in a movie: It depends on the film’s genre, he explained.

“Well, there are two movies. There’s the comedy that I think will be a big box office hit: Will Ferrell,” he said, prompting a round of laughs in the audience. “And then there’s my fantasy movie, which will be sexy and moody and then we go Daniel Craig.”

Singapore was the second stop on Kors’ Asian trip. Last weekend, the designer ventured to Seoul to celebrate two stores, a new one and an expansion of an existing boutique. On Saturday, Kors hosted an event at the newly expanded flagship in Cheongdam, Seoul’s luxury shopping district, as well as a Young Korea party with Kpop performances at an underground venue.

The Kors events happened to coincide with a large antigovernment rally taking place at the center of Seoul. Protesters were demanding South Korean president Park Geun-hye’s impeachment for alleged corruption. But the designer seemed to take the activity in stride.

“We’re having [protests] in New York, we’re having them in Seoul…. I’m going to avoid it,” he said. “Because you have enough traffic in Seoul already, just like we do in New York.”

Out of respect for the political demonstration, many of the expected celebrities, including top actress Kim Hye-soo, canceled their appearances at the Kors events. Those who did attend included actresses Claudia Kim, Kim Jung-eun, model Soo Joo Park, Seo-hyun from the girl group Girls Generation and boy-band member Rap Monster from BTS. At the Young Korea party, Korean-American model Irene Kim emceed and introduced singer Ailee, who performed upbeat Kpop and R&B numbers to a mixed crowd of VIP clients, local models and fans of the brand.

Kors last visited Seoul almost a decade ago. This time, he was impressed by its urban development as well as by the city’s creative character.

“For the [Asia] region, this is kind of the epicenter creatively. I think that that also makes the city exciting,” said Kors during an interview at the Park Hyatt Hotel. “The last time I was [in Korea], and from what I’ve seen just in less than a day — there’s still here an appreciation for things that feel sporty and casual but at the same time have a sense of glamor.”

“I think we’ve seen that we have a very loyal Korean clientele,” he said of the market he entered 10 years ago. “But for a lot of them, I think they thought of [us] as a handbag brand.”