The presentation will represent the first retail space dedicated to the full range of the brand's men's wear. 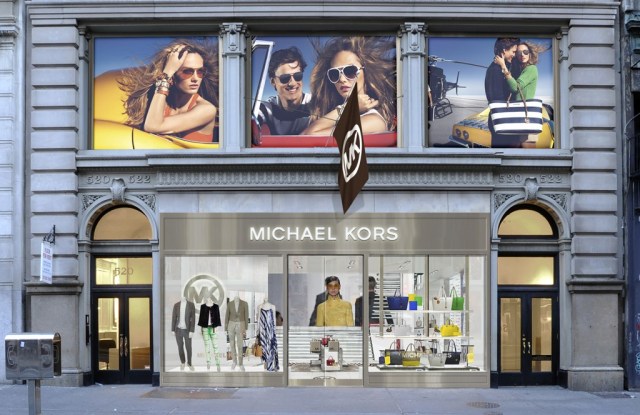 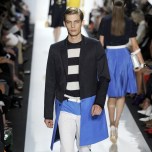 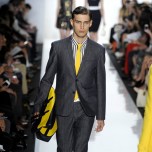 NEW YORK — Michael Kors Holdings Ltd. is placing a new emphasis on its growing men’s wear business, with plans to dedicate an entire floor to men’s product in a trilevel SoHo flagship that will open at the end of the year. The men’s presentation will represent the first retail space dedicated to the full range of Michael Kors men’s wear.

The new store at 520 Broadway, which will displace a Club Monaco unit, will be the largest Michael Kors store in the world, at 17,000 square feet of total space. Men’s will be housed on the 5,000-square-foot concourse level. The 4,500-square-foot ground floor will offer the company’s cash cows of women’s accessories, footwear, jewelry, watches, eyewear and fragrance. Women’s ready-to-wear will be carried on the 5,000-square-foot second floor, including the world’s largest assortment of the better-priced Michael Michael Kors label. A basement level for storage rounds out the space.

“This is the first opportunity for us to present the men’s collection in a complete format, featuring tailored clothing, shirts, ties, sportswear and accessories, in one of our stores,” said John Idol, chief executive officer of Michael Kors Holdings Ltd. “We view adding men’s wear to our existing lifestyle store format as an opportunity to gauge the potential for an expansion of our retail concept. Retail is the key component of our overall growth strategy and we are [pleased] to incorporate our growing men’s wear business into that strategy.”

The new SoHo store will be more than twice the size of the Michael Kors flagship in Rockefeller Center, which at 7,165 square feet is currently the brand’s largest retail unit. In addition, Michael Kors operates five smaller stores in Manhattan, including two on Madison Avenue and units in the Flatiron District, Greenwich Village and SoHo.

The company will keep open the neighboring SoHo store at 101 Prince Street and elevate its positioning with a focus on Michael Kors Collection product.

Designer Michael Kors said of SoHo, “It is one of New York City’s most cosmopolitan neighborhoods, a hot spot for luxury tourism and the perfect location for our largest store in the world.”

Asked about plans to open additional dedicated men’s retail spaces, Idol said the company would be on the lookout for future opportunities. “We will look at specific opportunities in flagships to add men’s products — those being men’s ready-to-wear and men’s leather accessories,” he said. “We will certainly look to see if the right retail environment becomes available in certain major U.S. and European cities.”

Idol declined to break out men’s versus women’s Michael Kors sales, noting the men’s business remained in a formative stage but was successful and growing. “We’re in the early stages of developing our men’s business globally. We are pleased with its performance and development to date,” he said. “For all the major luxury goods companies, men’s wear is an important element of completing the total lifestyle experience for our customer.”

Unlike in women’s, sportswear is the biggest driver of Michael Kors men’s sales, said Idol. In contrast, accessories, footwear, watches, jewelry and eyewear accounted for 79 percent of total company sales in the second quarter ended Sept. 29.

Michael Kors signed a 15-year lease for the new SoHo store. The rent is $300 a square foot, based on 14,500 square feet of retail space, which would put the total at $4.35 million a year, according to figures provided by Faith Hope Consolo, chairman of the retail group at Douglas Elliman. Michael Kors was represented by the Dana Commercial Group division at Douglas Elliman in the transaction with building landlord Tahl Propp Equities.

Consolo said the figure represented market rent for the area. “This corridor is very much in demand and sought after by all types of retailers,” she said. “It is a seven-day-a-week, 12-hour-a-day shopping area and the corridor is expanding and pushing south to Canal Street.”

Foot traffic on lower Broadway is matched only by Times Square and Fifth Avenue and is one of the best sources for cross-shopping both cheap chic and luxury brands, Consolo added.

Expanding its retail footprint is a major growth strategy for Michael Kors. In the current fiscal year, which ends in March, Michael Kors is on track to open a total of 70 new retail locations, including 45 in North America, 15 in Europe and 10 in Japan.

For the six months ended Sept. 29, the retail segment comprised 48.2 percent of total Michael Kors revenues of $947.8 million, wholesale was 47.8 percent and licensing was 4 percent.