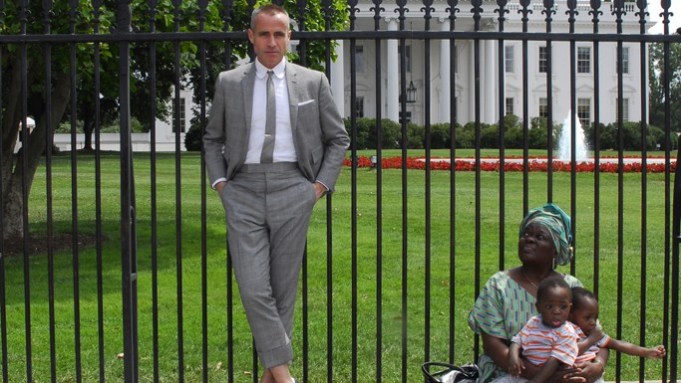 Thom Browne, a designer who has worked his way to the top of the fashion world without any formal schooling, understood the weight of the moment at the White House Friday as he joined an elite group of designers in Washington being honored by First Lady Michelle Obama.

Browne, who won in the fashion design category of the Smithsonian’s Cooper-Hewitt National Design Awards, said he was “overwhelmed by the experience.”

“This ranks as one of the most special awards because of the nature of receiving it among so many other designers,” Browne said. “That’s what makes it special for all of us. I did not go to design school,” he said. “I left school [after graduating from the University of Notre Dame] and didn’t know what I wanted to do. Here I am now winning a design award and going to the White House,” he said, noting that he wanted to relay that story to high school students participating in an education program held before the White House ceremony. “So it’s important to tell kids to stay true to themselves.”

Browne said Obama “really understands that she is on a huge platform.

“It is so nice that she sees her role and importance and actually helps American designers, especially young designers,” he said. “She is so conscious about using where she is in a really good way, in a very helpful way, by the clothing she wears and supporting younger and newer designers — I’m not a younger designer but I am one of the newer designers — I think she is very generous in being very conscious in that way.”

For her part as honorary patron of the National Design Awards, Obama called the designers visionaries who are “pushing the boundaries, creating and revealing beauty where we least expect it and helping us all lead healthier, more sustainable lives.”

Quoting one of the honorees, Richard Saul Wurman, creator of the term “information architecture” and author of 83 books on the topic, Obama said: “In the end, as he put it, he does this work ‘not for the fame, fortune or money,’ but ‘just really to do something good.’”

That is the “defining characteristic” of the honorees, Obama said.

“All of them have done something really good for our country and our world,” the First Lady added. “From the clothes we wear to the technologies we use to the public spaces we enjoy, their work affects just about every aspect of our lives.”