To mark the Salone del Mobile's 50th anniversary, the Triennale Design Museum will host an exhibition dedicated to the history of Italian design. 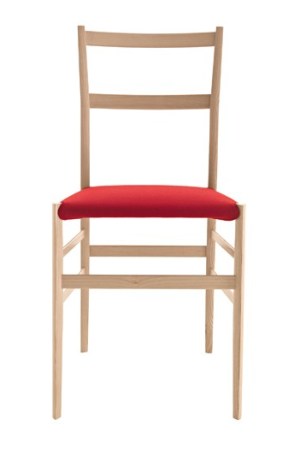 To mark the 50th anniversary of the Salone del Mobile, the Triennale Design Museum will host an exhibition dedicated to the history of Italian design.

Named “Le fabbriche dei sogni,” or loosely translated, “Dream Factory,” the show will celebrate significant artists, companies and projects that characterized the development and success of this sector.

About 200 iconic design pieces will be presented in a fairy -tale atmosphere referring to the imaginative worlds of Lewis Carroll and Antoine de Saint-Exupéry.

Who: Gio Ponti for Cassina

What: Considered one of Ponti’s three masterpieces (the others include the Pirelli Tower in Milan and the Concattedrale of Taranto, Italy), this clean and minimal chair, consisting of an ash-wood frame and an India cane seat, weighs under four pounds.

Who: Achille and Pier Giacomo Castiglioni for Zanotta

What: The “telephone stool,” designed by the Castiglioni brothers for the living room of their Villa Olmo on Lake Como, represents an homage to Marcel Duchamp’s ready-made art technique. The adjustable leather saddle, taken from a racing bike, sits atop a pink painted steel tube supported by a heavy cast-iron base.

Who: Achille and Pier Giacomo Castiglioni for Flos

What: The epitome of simplicity and functionality, this minimal floor lamp is made of a combination of three basic geometric shapes: a white Carrara marble rectangular base, a glossy stainless steel arch and a semi-spherical aluminum reflector.

Who: Vico Magistretti for Artemide What: Serving as a lamp for table or wall, the painted metal Eclisse can be considered an ode to the sphere. The base is a semisphere and the reflector is a truncated sphere containing a smaller one. They can be rotated independently around a vertical axis to direct and regulate the light.

Who: Giotto Stoppino for Kartell

What: Portariviste is a practical, four-compartment magazine rack that’s carried by a strategic cutout on top that acts as a handle.

Who: Jonathan De Pas and Donato D’Urbino for Zanotta

What: Inspired by the ancient Chinese game “Pick Up Sticks,” the Sciangai coat-stand consists of eight beech wood poles fanning out from a steel joint in the middle. Its practical structure allows it to close when not in use.

Who: Gae Aulenti for FontanaArte

What: To design this iconic four-wheeled glass table, Italian architect Aulenti took inspiration from one of the manufacturing processes at the FontanaArte factory, where the glass plates were moved around on wood boards with wheels.

Who: Aldo Rossi for Molteni

What: Rossi conceived the idea for this wardrobe, which resembles a typical beach cabin, during a period spent on Elba Island off the coast of Tuscany.

Who: Philippe Starck for Flos

What: The Miss Sissi table lamp, which comes in a wide range of bold colors, combines a retro shape with the use of an innovative injection-molded polycarbonate.

Who: Philippe Starck for Kartell

What: The comical and unconventional Attila, Napoleon and Saint-Esprit pieces can be used as both stools and occasional tables. The three gnomes feature flat, circular hats — a perfect spot to rest that cocktail.

Who: Alberto Meda and Paolo Rizzatto for Luceplan

What: Described by the company as “the candle of the third millennium,” StarLed Light is a table lamp featuring LED technology. A gem-inspired prism contains an LED bulb atop a methacrylate base.

Who: Fernando and Humberto Campana for Edra