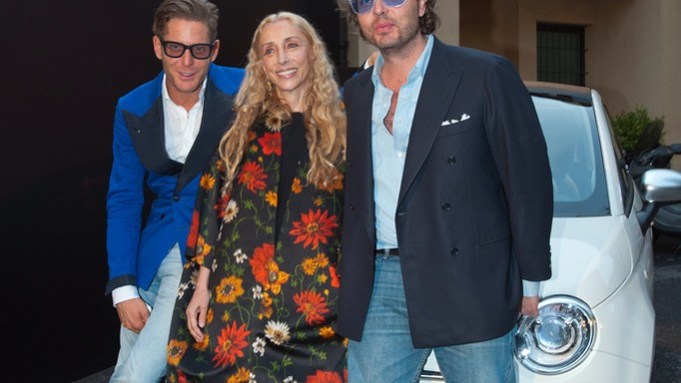 Milan Design Week kicked off Monday with an onslaught of presentations around the city, and no shortage of parties.

Gucci introduced its new Fiat 500C cabriolet by Gucci at the headquarters of Lapo Elkann’s Independent Ideas, in a drive-in movie format where guests were invited to view five specially made short films from inside the new cars.

“It’s nice to see how the magazines are different from each other, but I think that Vogue’s style is always the sharpest,” said Franca Sozzani, the magazine’s editor in chief, referring to the black and white movie directed by her son, fashion photographer Francesco Carrozzini.

The idea for the Fiat-Gucci partnership “was born around a plate of pasta in scenic Rome at a lunch with Frida Giannini,” Elkann explained with a grin, adding that several months of fine-tuning its design followed. The car will also be presented in China on April 19. Giannini and Gucci president and chief executive officer Patrizio di Marco were not in attendance, as they were already in Shanghai planning the brand’s fashion show and party to be held there on April 21.

Chilly winds kept guests largely off the outdoor patio, but inside the Bulgari Hotel, attendees at the T Magazine party were in good spirits.

Editor in chief Sally Singer said she was just in Milan for a few days, and would be finishing the new travel edition of T upon her return to New York.

Another citizen of the Big Apple in town was Karim Rashid, who arrived at the party straight from the Peuterey cocktail in celebration of the jacket he designed for the company’s 10th anniversary. Among the 112 projects on his desk, Rashid listed a pair of high heels he is creating for an Italian company; 600 hotel rooms in Bangkok; another hotel in Tel Aviv, and a plastic surgery clinic in Seoul. “I think that it’s very interesting designing for hospitals,” Rashid commented. “I had cancer last year and I had to spend a lot of time at the hospital where I realized that the atmosphere in those places doesn’t help you feel better, while a more playful design can make the difference.”

Other personalities present included Marco Zanini, Luisa Beccaria, Matteo Marzotto — who will host a cocktail at the Vionnet store on Wednesday night to present some seats and tableware by Christopher Kautz — and Federico Marchetti. Neil Barrett arrived at the party breathless from a slew of projects. “We’re working on the [June] men’s show,” he said, adding that Robbie Spencer, senior men’s wear fashion editor from Dazed & Confused, was styling the show, as well as the brand’s third advertising campaign, which will also be its first in which the models are clothed.