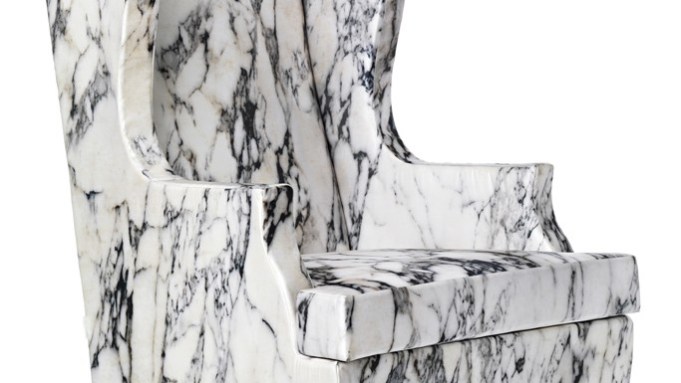 Achilleos, a theater-puppet maker, started her collaboration with Vuitton in 2010, when she created 20 animals for the opening of the London store on New Bond Street.

“It’s my first time in Milan,” said Achilleos, who recently made puppets for the production of “The Little Mermaid,” to be staged in Amsterdam soon. “I’ve been impressed by the rich and impressive architecture, which nobody tells you about.”

Also at Milan design week for the first time were COS designers Martin Andersson and Karin Gustafsson, who flew in from London to celebrate the brand’s Italian debut with a temporary store in the Ventura Lambrate design area. Created by British designer Gary Card, the pop-up store consists of a wooden cube cut in sections and accessorized with select pieces from the spring men’s and women’s collections for the Hennes & Mauritz AB high-end brand.

“Interior design is an inspiration for our collections and we think that there is a strong connection between the brand and the people that are attending design week,” said COS men’s wear design manager Andersson, who will be back with Gustafsson in early May to fete the opening of the first COS flagship in Milan on Corso Venezia.

The Antonio Marras headquarters, Circolo Marras, also boasted a temporary store. The Sardinian designer opened his space to the public, giving them a chance to relax while perusing special items and fragrances, or sitting on vintage armchairs reading books and drinking cups of tea.

Bottega Veneta held a cocktail at its headquarters, which showcased its new Tassello furniture pieces, developed with Poltrona Frau. Cerruti Baleri turned its showroom into “housing models,” a kind of ideal building divided into four: the creative atelier, the office, the canteen and the apartment, the latter outfitted by Maison Martin Margiela as a spacious Parisian residence with Champagne bottle lamps and a note to the neighbors asking to forgive the noise.

At the showroom cocktail party, Nino Cerruti said the emphasis was on “dreamy,” Dada-esque products — such as armchairs covered in faux-marble silk and viscose — an inventive atmosphere and a “couture sense of luxury.” He added that China has become a key market for the brand. “They want luxury. But they only know fashion names, they don’t yet know design names. With them you have to be spectacular and expensive,” he said.

Viktor & Rolf organized a cocktail party at cool multibrand boutique No30 on Via della Spiga. “Resort is finished and the men’s collection as well,” said Viktor Horsting, who arrived at the event with Rolf Snoeren and Renzo Rosso, whose Staff International produces the designers’ brand. “Now we are working a bit on the production of the men’s show and we are developing a new women’s fragrance, which is supposed to be launched in about a year and half.”

At the Moschino store on Via Sant’Andrea, Rossella Jardini celebrated the launch of the colorful, diamond-shaped Arlecchino furniture collection, inspired by the Harlequin mask. The designer spoke enthusiastically about the brand’s upcoming fall-winter advertising campaign. “We are shooting on Monday in the mountains near Cortina with Juergen Teller,” she said.