Marco de Vincenzo, one of the hot designers on WWD's radar, offers a spring collection inspired by gymnasts. 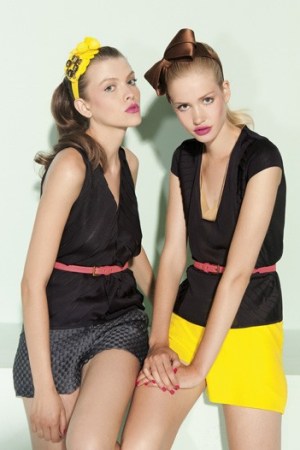 This story first appeared in the September 21, 2009 issue of WWD. Subscribe Today.

Launched: The Sicilian designer launched his namesake line in March of last year after working with Silvia Venturini Fendi, the accessories director at the fabled luxury goods house. “Though I built my experience with accessories, I always knew that I wanted to design clothes,” said De Vincenzo, adding that Fendi was a great learning experience because of the mix of craftsmanship and technology.

Base: Rome, where De Vincenzo still consults for Fendi.

Creative spark: Sicily is a major source of inspiration, though never too blatantly. A print, for example, can vaguely recall majolica tiles. De Vincenzo opts for simple silhouettes with elaborate constructions and an Art Deco bent.

Spring highlights: The second-skin attire used by gymnasts inspired De Vincenzo’s spring effort with lots of Lycra spandex and cotton jersey that he fashions primarily into elongated T-shirts and finishes with intarsia detailing.

Launched: June 2007. Sasso and Caro met in Bologna, where the latter, a Colombian native, was studying art and painting while Sasso was finishing a course in fashion history.

Creative spark: Transporting art, be it a 16th-century painting or a contemporary work, into fashion via colorful prints. “We start with a theme such as ‘Alice in Wonderland,’ which we like to reinterpret with a Dada influence,” said Sasso.

Spring highlights: The collection is inspired by Joseph Cornell, an American artist from the Fifties, with bold prints and loose shapes crafted from silk twill, duchesse and cotton poplins. The duo’s favorite silhouette is a slouchy black-and-white blouse tucked into high-waisted trousers.

Launched: Though he unveiled his first namesake collection three years ago, Giovannini is just now gaining international recognition. He cut his teeth at Versace and Jean Paul Gaultier.

Creative spark: Inspired by the elegance of early 20th-century French couturiers, Giovannini has singled out knitwear as his focus. “Yarns are ductile and you can weave them into whatever you want,” he said. The designer likes to push the looms to churn out knits that could be mistaken for wovens.

Creative spark: Laurenzano’s bags feature dainty couture elements such as bows and flowers, cherished by the likes of Yves Saint Laurent, Valentino and Halston. “I like my bags to have a retro Boho look and slightly decadent feel,” said Laurenzano.