Trends stood out loud and clear on the Milan runways, and this razor-sharp vision and powerful newness left retailers upbeat about prospects for spring. 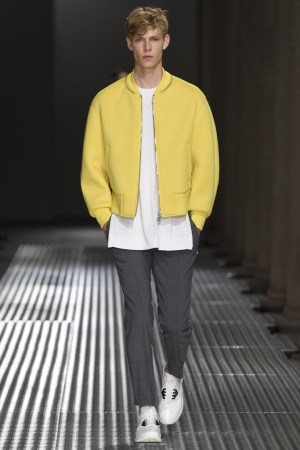 MILAN — Trends stood out loud and clear on the Milan runways, and this razor-sharp vision and powerful newness left retailers upbeat about prospects for spring.

Loose shapes and relaxed tailoring; new pleated trousers — often cropped carrot styles — and double-breasted jackets; matching tops and bottoms; a new take on denim; soft cardigans; graphic, striped and floral prints, and a plethora of sneakers and sandals were among the standout trends in the city, which was perceived as buzzing and exciting.

“Milan is getting its mojo back,” said Eric Jennings, vice president and men’s fashion director at Saks Fifth Avenue. “The collections were rejuvenating and absolutely tapped into the positive energy of Pitti [Uomo]. Although the business environment in Italy is challenging, I feel the new government is offering good support.” Jennings said Saks was “staying the course” budgetwise and would stock up on “soft tailoring, which Milan is all about. We saw a lot of different shades of white in tailoring, which looks just fresh this season,” he said. Jennings described Andrea Pompilio’s collection for Canali as “a standout — surprising and delightful” — and pointed to Salvatore Ferragamo’s “beautiful prints and colors,” calling it a “stellar show. Neil Barrett is also having a moment with his combination of athleticwear done in a polished way. And I think Fendi was really spot-on. It showed what the modern man could — or rather should — be wearing today. But we are also watching the emerging designers. No. 21 and MSGM are among the brands on our radar.”

Kevin Harter, vice president of fashion direction for men’s at Bloomingdale’s, echoed Jennings’ upbeat view. “This was one of the best Milan seasons I have seen in a long time. There will be a lot to buy next spring. We are slightly increasing our budget based on the newness and excitement we have encountered. There were some very commercial collections, but also a lot of ‘thinking outside the box,’” said Harter, who singled out Pompilio’s first design effort for Canali, calling it “absolutely terrific” for its “infusion of sportswear and color. The coats and fabrics at Salvatore Ferragamo were outstanding, and Neil Barrett was the best I have seen him. He took this athletic trend, but made it his own with quick coats and infusions of color.” Harter said he was also excited to see MSGM “with its palm trees and flamingos,” adding that he has been seeing “a lot of that breezy Southern California vibe, which is very on-trend.” Harter said Bloomingdale’s would stock up on separates — pants especially. “Pants are really the new jacket — they are one of the biggest opportunities for us and we saw a lot of different options.”

He also noted that it was refreshing to see designers use denim again. “This has been a challenging business category for us, so it is interesting how it makes the transition to the catwalk again, and there were a lot of denim shirts and jackets, so denim not just below, but above the waist.”

Jimmy Chan, men’s merchandising manager at The Swank in Hong Kong, agreed. “Denim is going to be a very strong fabrication across all clothing categories, even as in a T-shirt or blazer. An extra lightweight overcoat becomes a must-have, and I really loved the sneakers from Antonio Marras,” he said. Chan also cited Tillmann Lauterbach, a finalist for the inaugural LVMH Prize, as another discovery. He noted he was confident going into the buying season in Europe. “Fashion retailing has been changing a lot in the past years, and I can see that many houses are adapting to the environment confidently and we see a stable growth in spring-summer 2015,” said Chan.

Steven Cook, senior vice president of buying and merchandising at Holt Renfrew, called the Milan season “very strong. Spring coats and outerwear are important key trends as well as a continued expansion and focus on leather goods categories, including the strong bag that was seen on most runways,” he said. “Our one to watch was Antonio Marras, who showed an extremely fresh take on men’s wear.” Holt Renfrew favorites included Neil Barrett, Dolce & Gabbana, Canali, Prada, Brunello Cucinelli and Fendi for leather goods. In October, the retailer is unveiling an “Italian Immersion” program with the Italian Trade Commission to promote men’s brands including Brunello Cucinelli, Tod’s, Gucci, Dolce & Gabbana and Etro.

Jason Broderick, fashion director of men’s wear, sports, and watches at Harrods, said, “One of the big highs of the week was Armani — it was a hugely modern collection for him. He used his DNA for new shapes and a new color palette, and the timing was perfect as he’s ready to celebrate his 40th anniversary.” In terms of trends, Broderick pointed to athleticism — “Bottega Veneta was superb,” he said — and a “very strong retro feel across a lot of collections,” including Prada, Zegna and Neil Barrett. Broderick said spending increases are already “in place” for the Milan spring 2015 season, and that he was impressed with the city’s vibe overall. “It felt like Italian brands are looking toward what is going on outside Italy, in other markets, and responding to that.”

Ken Downing, fashion director for the Neiman Marcus Group, praised the color palettes — from the “new mix of marine blues” and the “Moroccan spice palette” to the “mixed patterns” — from the checks, plaids and stripes, to the “organic florals that are less flowery and the tropical foliage. Masterful.” The new pants’ silhouette, with single or double pleats, is “the strongest statement to date. Men don’t have these in their wardrobes, and if they do, they are the wrong ones.” Downing also enthused about the casual elegance of knit blazers and soft cardigans as well as the excitement around sneakers, worn also with sartorial suits for a “casual cool” look. His top collections were Tom Ford, Bottega Veneta, Fendi and Canali.

“Milan designers are accommodating the guy who wants fantastic everyday clothes. They’re definitely listening to him,” said Damien Paul, head of men’s wear at Matchesfashion.com in London. Milan fashion makes up about 30 percent of Matchesfashion’s men’s business, he said, adding there are plans to increase the budget for spring, although he declined to say by how much. Among his favorites this season were Bottega Veneta and Marni.

David Witman, executive vice president and general merchandise manager of men’s wear at Nordstrom, noted “a nice balance between tailoring and streetwear ideas. Tailoring was relaxed, monochromatic and sophisticated, while sportswear was modern, graphic and very wearable. We think our customers will respond to the overall neutral palette of white, tan, gray and black, and will take some risks by adding a little color here or there, especially red and yellow. Luxe denim and stripes also looked great.” Witman singled out the Neil Barrett, Gucci, Canali and MSGM collections.

“The Milan collections this season reinforced the strength of the Milanese designers, illustrating that a collection is merely a rail of clothes until the designer breathes life into them, allowing them to emerge as a lifestyle concept,” said Tom Kalenderian, executive vice president and gmm at Barneys New York. Pitti Uomo, he said, “was a hard act to follow, given the excitement and energy built around the 60th anniversary of the emergence of fashion presentations in Florence,” but added that “overall, the Milan collections were strong, continuing to infuse casual, sometimes athletic elements, into the formal clothing.” Kalenderian said he felt that the Milanese “rekindled a look back at the casual elegance of men’s style; especially in the nonchalant way that the Milanese emerged as modernists in the 1970s. No collection illustrated this better than Giorgio Armani and Ermenegildo Zegna by Stefano Pilati.” He said denim was “by far the strongest influence on men’s in Milan, replicating the pattern of indigo cloth textures printed on sweaters to the multiple shades of blue denim.”

Bruce Pask, men’s fashion director at Bergdorf Goodman, said, “A traditionally buttoned-up Milan showed a more casual side,” as knit sport jackets became the must-have pieces, “dressy enough for work and yet comfortable and casual for an elevated weekend look. The sporting life continues to inform the collections here in a big way, both in silhouette and materials. The track-style pants, anoraks, short zip jackets of all sorts, rich knitwear with athletic detailing all dominated the field,” said Pask, citing Neil Barrett, Tom Ford and Thom Browne’s homage to Rocky at Moncler Gamme Bleu. He said, “The top-stitched denim styling and leisure suit ’70s look at Prada was terrific.” Pask also said he was “excited about all the interest in trousers.”

Ahmet Öcal, buying director of the men’s merchandising group at Istanbul-based Beymen, said the company will expand its sartorial offer from Italian vendors. “Men are dressing up again without sacrificing their comfort,” he said. “We also see Milan is supporting more and more young designers and ideas,” he added. Denim, summer trenchcoats, linen suits and versatile jackets that can be worn as an outerwear piece or for evening were among key apparel trends, while bi-material loafers, Panama hats and weekend bags are among top accessories, Öcal said, singling out Bottega Veneta, Fendi, Neil Barrett, Belstaff, Etro, Prada, Brunello Cucinelli and Ermenegildo Zegna as favorites.

Adrian Ward-Rees, men’s wear gmm and fashion director for Lane Crawford in Hong Kong, called the season “calmer and more subdued,” with highlights “through the more contemporary and designer brands. There was a definitive approach to creating a younger aesthetic through the use of layering and sports shoes. [That said,] the brands have been consistent in delivering the commercial needs of the business, and maintaining the energy to keep the consumer excited. We are further investing within Milan this season as we continue to develop a luxury tailored upper casual aesthetic.” His favorites included Dsquared2, Moncler, Ermenegildo Zegna and Neil Barrett, in addition to Boglioli, Marni, Andrea Pompilio and No. 21.

Sebastian Manes, buying and merchandising director at Selfridges, thought the Milan shows were “stunning — very, very strong as a mise-en-scène: The Prada show with the pool was interesting, and Moncler was stunning with the boxing ring in the middle. Moncler did an amazing job, and it was by far my favorite.”

Nelson Mui, men’s fashion director at Hudson’s Bay and Lord & Taylor, said, “The established brands really played to their strengths, and there were not a lot of overarching, big themes. It’s as if the brands were taking key items — the blouson jacket, retro polo, track pants, pleated pants, bomber and Harrington jackets — and reworking them with their own aesthetic. Milan was very relevant.” He cited Giorgio Armani and Emporio Armani, Prada, Missoni, MSGM and Gucci among the strongest collections. “Armani seemed really relevant right now [because] draping, slouchy, softer and more fluid shapes have all been circulating.” He also pointed to Prada and praised “the relaxed surfer vibe at Missoni, and the quintessential brand patterns and colors.”

Darren Skey, buying and merchandising manager, men’s wear at Harvey Nichols, especially liked Neil Barrett’s “double-zipped sweats and the colorblocking on the final exits. I also really enjoyed the Marni presentation: The product was beautiful and clean and the presentation was very cool. The Zegna show was a real move on for them, and definitely shows [Stefano] Pilati’s skill in positioning the brand.” Trendwise, he said, there was a definite move toward white, while lots of layering is still evident. “Bombers had a strong presence again, and will be a key category for us,” said Skey, adding that budgets for Milan will remain flat to last year.