The Men of Milan

From modern interpretations of the British dandy to influences derived from nature, men’s designers share their inspirations for fall. 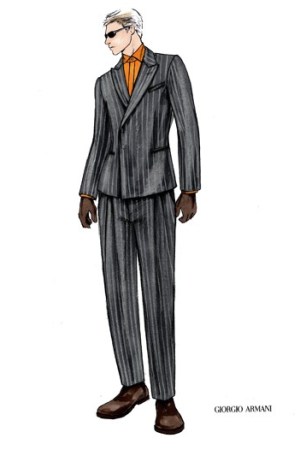 Emporio Armani
“An industrial setting. Cement, metal, textured surfaces and paints. The vast color palette doesn’t include black. These are the elements that inspired me for a collection that is fluid, dynamic, dedicated to a young man who lives in a contemporary reality and chooses easy, practical, strong clothes, always paying attention to details. Like the essential gray mélange trench in laser-cut wool.” — Giorgio Armani

Neil Barrett
“My inspiration was scuba, peacoats and military snow patrols. When experimenting with hybrids of garments, the options are endless.” — Neil Barrett

Salvatore Ferragamo
“Chic is a blending of tradition and modernity, soft and rigorous, warm and cold — a mixture of characters, a prodigious balancing act that becomes an exclusive lifestyle. The new world of Salvatore Ferragamo.” — Massimiliano Giornetti

Ermenegildo Zegna
“Silhouettes are defined by straight-shouldered, three-button suits and jackets, as well as streamlined high-cuff trousers, to be worn with snug raglan overcoats. The sporting attitude is echoed by utility touches and tweed-effect or macro Prince of Wales fabrics. Moving away from their usual roughness, Zegna reinvents them as sumptuous, bicolor ‘Cashmere Duo.’ The new ‘Cashco Goffrato’ waffle fabric makes its debut, interweaving worn-looking cotton and wool. The outerwear is nonchalant and practical, with waxed cotton and leather peacoats as well as buffed-off shearling duffle coats. Many handcrafted cashmere sweaters, some of them with suede embroideries, are inspired from ancient Chinese paintings.” — Anna Zegna, image director

Z Zegna
“The ever-present virtuoso craftsmanship of the Z Zegna brand skillfully mixes deconstructed and ‘boxy’ outerwear. Trousers are wide at the hip and slim at the ankle, creating a new male silhouette — striking yet slender. Coats are short, either three buttoned or double breasted. Many of them are offered in a more fluid, scarf-neck-lined version hinting at the shape of a cardigan. Squared and protective cuts characterize the ample choice of overcoats and outerwear, alternating high-seamed leather jackets and more hybrid garments, like peacoats made with a remarkable jersey in a heavy 800 grams.” — Alessandro Sartori, creative director

Etro
“Frederick II of Svevia, the King of Paisley: a modern metaphor for art, life, culture and passion; an unexpected yet extraordinary encounter between India and Mitteleuropa.” — Kean Etro

Missoni
“Our man is attracted to nature, in line with Missoni’s DNA, but always remains contemporary at heart.” — Angela Missoni

Giuliano Fujiwara
“The new Giuliano Fujiwara collection for fall-winter [2011]-12 gravitates towards the notion of a sartorial rebel. He is cleanly tailored and coiffed, yet highly utilitarian and street savvy. Slightly rough around the edges, he is ready for the daily pursuits of urban life.” — Masataka Matsumura

Albino Deuxieme
“For my second men’s collection, I looked at the countries bordering the North Sea, where nature reigns with its peace and colors. I got into a Scandinavian minimalism with a street attitude. The color palette is dominated by ice tones, different shades of blue and the hues of the tundra.” — Albino D’Amato

Roberto Cavalli
“For my new collection I was inspired by a modern dandy. He is a traveler, a dreamer and an intellectual whose cult of beauty is translated into a constant research that joins tradition and innovation, Italian sartorial elegance and attention to details.” — Roberto Cavalli

Umit Benan
“The new Umit Benan collection for winter takes inspiration from the flawless elegance of investment bankers and young go-getters in the world of finance, a late-Eighties image of infallible and unscrupulous New York City professionals as portrayed in the films ‘Wall Street’ and ‘American Psycho.’” — Umit Benan

Brioni
“Tone-on-tone Prince of Wales, weaves, macro-checks and houndstooth are the patterns from the British tradition that inspired us and which we revisited in a modern key. Originally expressed by cashmere’s neutral tones on exclusive fabrics, these variants are enhanced by Brioni’s outerwear — blazers and coats — with precise cuts and slim silhouettes emphasizing the waist without forfeiting comfort and fit.” — Gianluigi Di Nino, Brioni design team