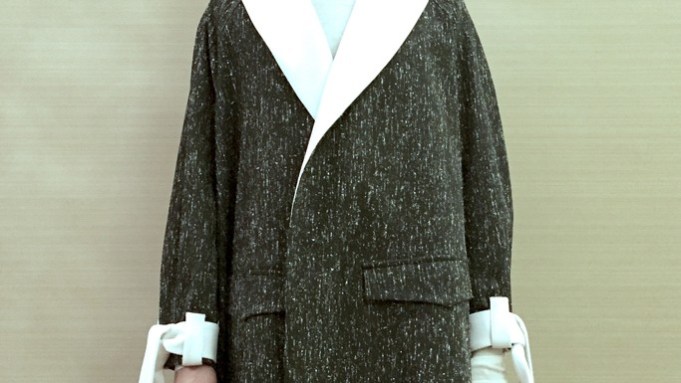 Edmund Ooi is about to make his debut at Milan Men’s Fashion Week with a runway show at Giorgio Armani’s theater on Saturday. Ooi is the latest young designer to be offered a venue by Armani.

Born and raised in Penang, Malaysia, Ooi discovered his passion for fashion thanks to his mother, who used to run a tailoring atelier. There, Ooi cut his teeth, before moving to Antwerp where he got a fashion design degree at the prestigious Royal Academy of Fine Art. After graduation, Ooi joined Mugler’s men’s wear design team and in August 2013, launched his namesake brand.

“At the beginning I made everything by myself at home,” Ooi said. “Slowly, my line started to grab attention and now it’s about to embark on its new journey.”

Strongly motivated to “break boundaries in men’s wear by adding fun and experimental elements,” Ooi developed a fashion vision where fun details are worked with a tailoring approach, allowing him to develop creative yet wearable collections.

He describes the fall/winter 2015 collection as “very personal.” Ooi started with some elements of costumes from the late 18th century and the early 19th century, which he digitalized with a contemporary approach. But he didn’t find the first samples convincing. “My clothes looked very controlled, clean and sharp, so I started shredding everything,” he said. “The final results are quite interesting because I couldn’t keep my control freak personality out of the way, so everything ended up in a ‘controlled shred.’”

The lineup’s standouts include a wool coat that was hand-shredded seam by seam; high-end jacquard knits; eye-catching pieces decorated with rubber sequins, as well as knitted collar scarves. Wholesale prices range from 90 euros, or $106.50, for small accessories, to 800 euros, or $947, for the most elaborate outerwear pieces.

Edmund Ooi collections are sold in multibrand stores across Europe and Asia, but the designer’s goal is to expand to the United States.

Alexis Giannotti launched his men’s wear label Omogene in 2013 with the goal of making an artistic statement that is rooted in the past but projects into the future.

As the brand’s name implies, Nineties culture — skateboarding, punk music and street art — creates a homogenous mix in Giannotti’s aesthetic. It is filtered through a romantic lens and aims to break down the barriers between formal and casualwear in collections that blend retro sportswear and futuristic tailoring.

Based in Monte Carlo, Giannotti received his bachelor degree in literature and arts before moving to Florence to study architecture. After 2 1/2 years, Giannotti changed course, dropping architecture for a master’s degree in marketing and communication at the Polimoda fashion institute.

“I love to say that I have been designing for 28 years, because all the things I’ve learned and seen since my birth have influenced the way I think and perceive the world around me,” Giannotti said. “Like a sponge does with liquids, I do absorb a lot of inspirations from different sources.”

For fall, the designer was inspired by Franz Kafka’s “The Metamorphosis” novella and in particular the writer’s ideas of change and mutation.

Referring to the shape of the buglike creature described by Kafka in the book, Giannotti focused on curved silhouettes particularly evident in the cocooning outerwear pieces, such as a collarless wool coat, a Nineties-inspired soft leather bomber jacket with orange lining and a vinyl parka lined with technical mesh. These are all embellished with rounded pockets and details that are also found on the pants, which include rubberized denim styles and leather trousers with an elastic waistband. The offering is completed by long-sleeved T-shirts and sweatshirts. These include a turtleneck model with a combination of fabrics on the front, as well as cotton styles showing colorful frogs printed to create a camouflage pattern.