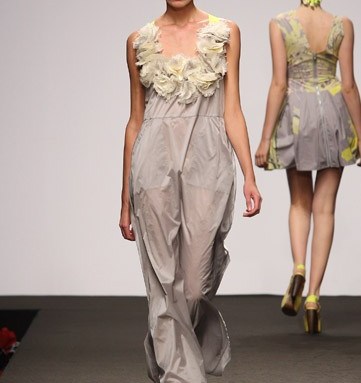 Uninterested in the gimmicky antics and the fussy constructions favored by his predecessors, the seasoned designer returned to a less-is-more template, forged around Brioni’s tailoring and classical tradition.

“I wanted everything to be lighter and less complicated, because the type of fashion that had been done is useless and out of context here,” said Dell’Acqua.

His first Brioni effort will be readied for a runway show at the Triennale on Sept. 26.

Citing a return to a new basic with a bourgeois undercurrent and a whiff of sensuality, Dell’Acqua said he refreshened the proportions with a play on the male/female aesthetic while tapping into Brioni’s 65-year-old men’s wear tradition.

“You can’t not take advantage of the outstanding sartorial tradition this company boasts,” said Dell’Acqua.

After graduating with a degree in fashion design from NABA [Nuova Accademia di Belle Arti] in Milan, Betterelli went on to design two capsule collections for accessories brand Furla. His spring line will be manufactured by Lecce, Italy-based S.P.S. Manifatture.

“I want to rediscover prêt-à-couture, with a more democratic attitude,” said Betterelli. “My aim is to design down-to-earth products — beautiful but with affordable prices.”

The designer’s goal was to take his two-dimensional sketches and incorporate them into his clothing by draping and molding fabrics of different weights like chiffon, silk voile, linen and light wool into various shapes. Betterelli generated a sense of optical illusion in his feminine and sophisticated dresses and blouses from the contrast between the folds of the fabric and the 3-D forms.

The color palette, ranging from aquamarines to soft grays, takes its hues from the tranquil sea surrounding the designer’s native island.

The line, available at Harvey Nichols in Hong Kong, Beams in Tokyo and Opium in Saint Petersburg, among others, retails from $154 for a draped silk blouse to $1,795 for an evening dress.

Rosa Clandestino
U.S.-born designer Silvia Argüello used her eclectic background — she is of Nicaraguan and Cuban descent and was raised in the Honduras — as an inspiration for her Rosa Clandestino clothing line. After studying at international design school Esmod in Paris, a four-year stint at Emanuel Ungaro and earning a master’s degree in accessories design from the Marangoni Institute in Milan, 33-year-old Argüello felt ready to go solo.

With her third collection, Rosa Clandestino was named among seven finalists of Vogue Italia’s Who’s on Next competition in July. Additionally, Argüello received the Fashion Freedom award, which gave her the opportunity to help out a community in Kenya through the sale of pieces that she created alongside a group of women from the area.

“My latest collection arises from the idea that life is a contradiction. A shape can be loved or hated, embraced or rejected, understood or misinterpreted,” said the designer.

The palette contains the usual pastel suspects, but with splashes of muted neon greens and pinks. Retail prices range from about $600 to $2,000. The line is sold at Realm Boutique in New York and will be available to buy in Milan Sept. 24 to 30 at the Carlton Hotel Baglioni, 5 Via Senato.

Argüello’s collection, along with the Fashion Freedom pieces, will be on display at Palazzo Morando, 6 Via Sant’Andrea, on Sept. 23.

After high school, the 27-year-old Roman designer moved to London where she studied fashion design at Central Saint Martins. After landing assistant positions at Viktor & Rolf and Jean Paul Gaultier, she designed the Brioni women’s line from 2007 to 2008.

Besides heading up the Fashion/Costume project at the Parisian Moulin Rouge, Liberatore is finally focused on developing her own line.

For spring, she designed a collection where “shapes are created based on the way the fabrics fall.” Pieces taken from the men’s wardrobe, such as pleated vests and masculine linen blazers, are mixed with feminine organza calf-length skirts with Swarovski Crystalized Elements and silk dresses.

The bright colors — emerald green, yellow, red and purple —recall the portraits that inspired the designer: three people from the Himalayas, with faces burned by the sun and the wind.

The collection will be unveiled during the New Upcoming Designers presentation on Sept. 22 and shown at the Mi Milano Prêt-à-Porter trade show from Sept. 24 to 27.

dMajuscule/
Davor Mutic was born in Serbia and raised in Norway, but he refuses to be seen as another Scandinavian minimalist designer.

After obtaining a degree in fashion design at design school IED in Milan, he worked with Nicola Del Verme for two years after which he consulted for the Italian brand Ring. He is now based in Milan.

In 2009, the 34-year-old designer launched his own brand, dMajuscule/, complete with unusual punctuation.

Starting with typically masculine pieces, he transforms them into ultrafeminine looks by playing with proportions and cutouts that show evocative parts of the female body, like the shoulders and back.

In terms of tones, “I have a predilection for black, but this season I wanted to introduce some colors, like peach, ivory, white and light gray,” he revealed.

The collection is available at Isetan in Tokyo, Harvey Nichols in Dubai, Antonioli and Dad Dantone in Milan, Luisa Via Roma in Florence and Gilda’s in Boston, among others. Wholesale prices range from $57 for a T-shirt to $380 for outwear.

The line will be shown Sept. 23 at Palazzo Morando, 6 Via Sant’Andrea. It will also be available from Sept. 25 to Oct. 20 at Progetto Showroom, 6 Via Archimede.

Pinko by Mark Fast
Mark Fast has been on the fast track since his graduation from Central Saint Martins in 2008. Besides regularly showing at London Fashion Week, the 29-year-old Canadian was nominated for the 2010 Andam prize and launched a second line this year.

In June, Fast was tapped by Pinko, an Italian bridge women’s label famous for its diversified offering and star-powered ad campaigns — the list includes Eva Herzigova, Naomi Campbell and most recently, Erin Wasson — to design a capsule collection for next spring.

“I think people will be surprised when they see the Pinko collection because it shows a side of my character that I haven’t really explored before,” said the London-based designer, who is known for his knitwear and body-conscious silhouettes. The inspiration was “the many moods of a modern-day Warhol heroine” where the night and day pieces “have been choreographed to be mixed and matched, clashed and layered,” he said.

The lineup, from anoraks to jersey dresses, with retail prices ranging from about $250 to $650 will be sold in Italy and abroad.

Pinko by Mark Fast will be presented Sept. 23 at the San Carpoforo church in Piazzetta Formentini.

Tonante
Armando Mammina is set on leaving his mark in fashion with a new outerwear brand called Tonante, an Italian word that means “thundering” and is associated with making noise and being successful.

Mammina, a former director of women’s ready-to-wear exhibition Milano Vende Moda, is now corporate communications director for tailored clothing company Facis and in charge of licenses for the Romeo Gigli brand. He’s building the business he founded two years ago on precisely tailored pieces entirely made in Italy with the support of production partner MG Fashion Srl, based in Martina Franca in Southern Italy; top service, which allows stores to be restocked in two weeks; high-caliber fitting based on ergonomic studies; the right volumes and proportions, and good value for price.

“Tonante is about discreet luxury, yet functional fashion for daily use,” said Mammina.

For spring, the collection comprises soft trenches and deconstructed jackets in nylon treated with carbonium, jazzed up by an understated animal print and a bright palette, from coral to strawberry red and Klein blue or army green and steel gray. At times, these are embellished with hand-sewn ruches.

Tonante is available at 80 points of sale, including Milan’s Biffi, Giò Moretti and Chicchi Ginepri; Tiziana Fausti in Bergamo; Penelope in Brescia, and Russo in Capri. The collection is available to buyers and press Sept. 16 to 30 at the brand’s showroom at 45 Via Senato.