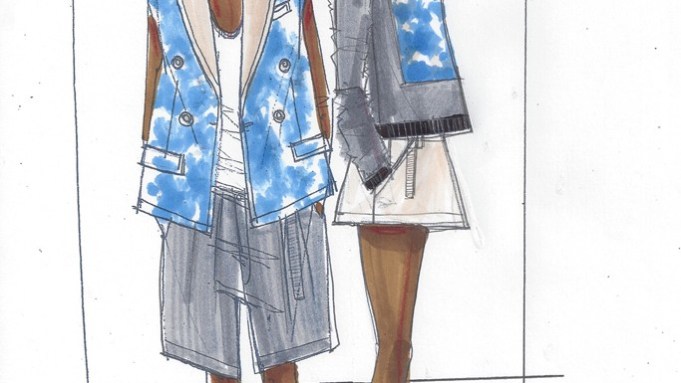 From ready-to-wear to jewelry and footwear, some new names to check out.

Buchanan launched Bottega Veneta’s ready-to-wear collections in 1995 when the brand was still owned by the Moltedo family and designed it for six years. In 1999, he teamed with Italian luxury knitwear manufacturer ROB Srl to unveil Sansovino 6 and, separately, in 2001 he launched his own label, Lesflesh.

“At a certain point, I realized we wanted to give the company a new direction, taking the brand on the right path,” said Buchanan, who also works for several fashion companies, including Stefanel, Max Mara and Pinko, among others.

“I’m not a dictator,” he said. “I create things and I only suggest how the consumer can wear them — I’m really conscious of how women dress today.”

Buchanan said the collection is focused on wearable pieces that can be easily mixed and matched and integrated into existing wardrobes.

The range includes a tie-dyed vest worn with comfortable pants; a fluid dress combining jersey, cotton piqué and sweatshirt, along with unconventional sweatshirt suits. Wholesale prices range from 40 euros, or $53 at current exchange, for a jersey tank top, to 140 euros, or $185, for a suit jacket. Sweatshirt bombers are around 160 euros, or $211.

The Sansovino 6 collection is distributed through the Riccardo Grassi showroom in Paris and Milan, where it will be available by appointment from Sept. 18 to Oct. 18.

Bratis, who holds a degree in fashion design from the prestigious Fashion Institute Arnhem in Amsterdam, launched his namesake women’s label in 2005. He offers ready-to-wear as well as made-to-measure dresses, which he has presented in Athens, Paris and New York.

Forced to leave his homeland owing to the 2010 crisis, the designer, who calls himself “an old-school couturier,” relocated to Italy, where he worked for several couture labels and fashion houses, including Vionnet and Roberto Cavalli. At the same time, Bratis continued to develop his own brand and in 2011 he won the Who Is on Next talent contest promoted by Alta Roma and Vogue Italia. His collections are currently sold in Italy — at Rome’s Degli Effetti and at Mariza Tassy boutique in Milan — and in Russia.

Aiming to deliver “the ideal summer wardrobe of a girl falling in love in the Greek islands,” Bratis designed 25 feminine outfits, all realized in fluid, lightweight fabrics like silk, viscose and cotton.

The lineup includes men’s- wear striped shirts paired with raffia circle skirts (inspired by straw hats); a short kaftan with voluminous sleeves, and a draped silk evening dress. Colors run from white and pale yellow to sky blue, and will be worn with Greek flat sandals.

On Sept. 21, Liborio Capizzi will open the doors of his Milanese atelier — a bohemian loft that reveals the designer’s rock spirit — to unveil the first collection under his new brand, named Diliborio. For the occasion, Skin, the leader of British band Skunk Anansie and friend of the designer, will perform as a DJ set.

A fashion veteran, Capizzi worked for more than 16 years with Gianfranco Ferré, responsible for the brand’s women’s ready-to-wear collections.

For the debut of the red range, Capizzi reworked classic fabrics, including cotton poplin, organza and washed silk, for a capsule collection of sculpted, elegant shirts mixing a sophisticated couture appeal with his signature punky touch. One style is embellished with organza piping and another features an origami-inspired decoration with handkerchiefs folded to resemble birds.

The palette, dominated by neutrals of white, ivory and black, is brightened by a colorful graffitilike pattern.

The collection will be positioned in the mid- to high-segment of the market, and will be produced in Italy by Giorgia Mattioli, daughter of Gianfranco Ferré’s first business partner, Franco Mattioli.

While cutting his teeth working for an Italian luxury fashion company in Florence, Sicilian designer Roberto Ferlito developed a strong interest in the accessories and jewelry business, which culminated in the launch of Schield in 2009.

Schield pieces are realized through an artisanal process. Hand-made prototypes are used to create silicon rubber molds to produce the pieces. The still unpolished items are chromed through a galvanic bath and then decorated with semiprecious stones and Swarovski Elements original crystals.

The vivid palette spans from red and pink to blue and black, but the spring range also includes pieces showing dragons in bright tones of turquoise and coral. Retail prices go from 700 euros, or $923, to 1,200 euros, or $1,580, for necklaces, while rings retail for 250 euros, or $330.

Schield’s spring collection will be available by appointment from Sept. 16 to Oct. 31 at Milan’s Breramode showroom.

Prior to launching footwear label Oscar Tiye in 2012, Jordan-native Amina Muaddi worked as a fashion assistant and stylist for international publications, including GQ and L’Uomo Vogue.

Manufactured in Italy in the Riviera del Brenta footwear district, her luxury shoes, ranging from flats to high-heel boots, are characterized by a magenta lining and insole, along with a metallic logo featuring the shape of a stylized scarab.

“I created this brand so it could accompany our customers in every moment — from morning until night,” Muaddi said. “Women always express themselves through what they wear and with our shoes, they will always find a new way to do it.”

Inspired by Byzantine art and architecture, the designer played with graphic, sexy cutouts embellishing several spring styles, including the Cleopatra high-heel sandal and the Casandra lace-up, over-the-knee boot, and decorated the Robyn sandal with fringe.

The brand’s collections retail from 450 euros, or $593, and are sold at Antonioli boutique in Milan, Florence’s Luisa Via Roma, Level Shoe District in Dubai, Passhion in Taiwan and Alter in Shanghai.

The Oscar Tiye spring range will be showcased at the Vogue Talents presentation at Milan’s Palazzo Morando, Sept. 17 to 22.