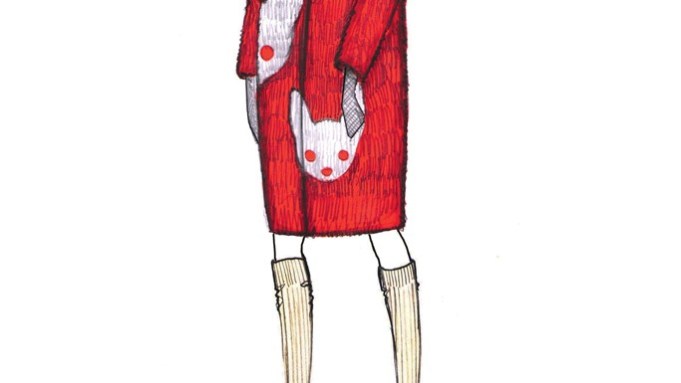 Four houses on the move.

After three seasons of presentations, Diego Marquez and Mirko Fontana, the Italian designers behind the Au Jour Le Jour brand, will hold their first runway show at the Armani Theater on Saturday.

“Showing for the first time in such an important location is both a test drive and a launching pad for our brand,” said Marquez, who founded Au Jour Le Jour with Fontana in 2010. “We were on vacation in Mikonos when we realized we wanted to create our own thing.”

Launched under license, in 2012 Marquez and Fontana closed the licensing agreement and established a company that directly manages the label. “We felt that we wanted to be more independent [on the business side and] also on the creative side,” Marquez said.

Positioned in the upper segment of the contemporary market, Au Jour Le Jour (which translates to “From Day to Day”) built a name for itself with cool, fun collections, characterized by bold, cartoonish prints, and is entirely manufactured in Italy.

“Our clothes target independent, ironic and confident women between 25 and 45 with a vast fashion knowledge,” Marquez said.

Au Jour Le Jour also features a men’s wear line, launched in 2013. It is currently sold in about 100 points of sale around the world, especially across Asia, Russia and Italy, and via its own online store.

Bought in 2011 by Fabrizio Lenzi, who over the last three years focused on providing the label with a strong organization, NewYorkIndustrie reached the apex of success in the Nineties under the control of Staff International. This season, it is presenting its first total-look collection during women’s fashion week in Milan.

For the relaunch, Lenzi assembled a “young and dynamic” design team headed by Italian designer Marta Martino, who trained with Ann Demeulemeester.

While the major focus remains on NewYorkIndustrie’s signature pants and overcoats, “which have been developed to be functional yet soft and lightweight,” starting with the fall season, the collection also includes dresses and skirts, along with three footwear styles, a shopping bag and a knitwear range.

“We have also offered our reinterpretation of the animal patterns on different fabrics,” said Lenzi, citing, for example, a double-face coat whose surface was burned to create leopard spots, as well as a fluid ivory and sand silk maxidress with a crocodile motif. In addition, the collection includes unique prints inspired by the work of contemporary artist Maripol.

According to Lenzi, the brand’s collections are currently sold in high-end multibrand stores across Italy and Japan, where the company signed an agreement with Japanese distributor Sanki. “We are also in talks with an international company that distributes about 400 high-end fashion brands in the world,” Lenzi revealed.

Vienna native Arthur Arbesser is marking his first anniversary in business with a “strong, edgier collection focused on layering, textured fabrics and colors,” which was inspired by the “aggressive British music scene at the end of the Seventies reinterpreted with a slightly gloomy feel.”

Arbesser’s career started in 2005, when he moved to Milan after securing a fashion design degree from London’s Central Saint Martins. He began working at the Giorgio Armani Group, for the Emporio Armani and Armani Exchange labels.

“Working for such a huge and structured company was a great experience, and I learned so much,” said Arbesser. “But, when I turned 30, I said to myself: If I ever want to launch my own brand, it’s now or never.”

So, after seven years at Armani, Arbesser resigned and focused on his first collection of wearable pieces with an androgynous look. He founded his label in February 2013, and in July he won Vogue Italia and Alta Roma’s Who’s on Next? competition.

For fall, Arbesser said he plays with contrasts, for instance combining rigid pieces, such as a classic Austrian loden coat with more fluid styles, like a tulle maxiskirt matched with a voluminous silk shirt. The collection retails from 240 euros, or $324, for a skirt, to 600 euros, or $810, for rich dresses or a silk duchesse jacket with faux astrakhan inserts, along with a coat and a biker jacket in Alcantara printed with a geometric pattern inspired by the Memphis art movement from the Eighties in Milan. The color palette ranges from black and various shades of red to gold and white.

“The goal is to enter the Korean, Japanese, German and U.S. markets with this third collection,” said the designer.

The fall range will be presented Wednesday through Friday at the home of architect Luca Cipelletti on Milan’s Via Benedetto Marcello.

Arbesser revealed, “Each room will show a specific installation where my clothes will be juxtaposed with iconic Italian design pieces.”

After a three-year hiatus, Italian knitwear label Malo is to present its new women’s wear collection on Saturday during the upcoming Milan Fashion Week.

The brand, which was acquired by Tuscan luxury retail group Evanthe in 2010, will showcase a full collection, where “knit inserts will make the pieces highly recognizable,” explained Malo chief executive officer Giuseppe Polvani.

Chevron patterns, in macro and micro versions, take center stage in the lineup. A wide range of knitted styles in blends of yarns like silk, cotton and cashmere create textured, 3-D effects. Sweaters, turtlenecks and cardigans, available in about 40 colors, are matched with pants, shorts, miniskirts and maxiskirts. Outerwear includes cashmere coats, down jackets and shearlings with knitted details. Retail prices range from 450 to 2,000 euros, or $608 to $2,700, for knitwear, while outerwear is around 1,000 euros, or $1,351, and pants are 600 euros, or $810.

To complete the look, Malo offers accessories, including a leather shopping bag and shoes ranging from high boots to ballerina flats.

Malo collections are currently sold in about 250 high-end multibrand boutiques around the world, as well as at the company’s own 30 stores.

“In the next few years, we plan to open between five and 10 stores a year, especially in Europe and the U.S.,” said Polvani, who added that the company will also keep developing its business in Asia, where three boutiques will open in Beijing, Taiwan and Shanghai this year.