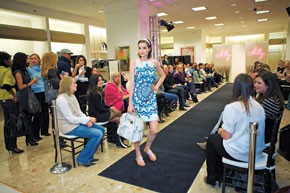 Smith said she and her husband, Andrew Oshrin, Milly’s president, are scouting for roughly 1,500 square feet of space on the Upper East Side to open their first retail store. Smith revealed the plan while visiting Chicago for a personal appearance and fashion show at Neiman Marcus, the seven-year-old New York-based line’s largest account.

The designer, who made the appearance with her blonde 14-month-old daughter Sophia in tow, said the sagging economy may actually be helping her line, in which knitwear and accessories begin at $200 and coats retail upward of $600.

“The high-end customer may be holding back and buying more pieces from me,” Smith, 35, said.

Milly’s bestsellers this spring include a navy and white hibiscus floral cotton sheath dress with white beading at the neckline retailing at $465, a white cotton jacquard day coat for $625 and a white cotton jacket with gold buttons and bamboo belt loops for $390.

Since launching in 2000, Smith, who previously interned at Hermès, Christian Dior and Louis Vuitton, said the line has grown organically, adding a resort and swimwear collection called Milly Cabana in 2005 and accruing more than 500 specialty store accounts.

The swimwear collection, in which an average bikini retails for $215, also helped opened doors for Smith, who said some European stores such as Harrods and Selfridges bought swimsuits first and then delved into the ready-to-wear collection.

While the line is available at Neiman Marcus, Bergdorf Goodman and Saks Fifth Avenue in the U.S., smaller specialty stores account for the bulk of its business, about 55 percent, Smith said.

Both Oshrin and Smith, however, predict continued brand momentum. Once the New York store is open, Smith said she would consider other domestic locations where business is strong, such as Chicago, Boston, Dallas, San Francisco and Atlanta.

Business is growing abroad, as well, with the line boasting 140 accounts in Italy. Overall, roughly 70 to 75 percent of Milly’s business is domestic accounts, with about 15 to 20 percent in Europe and 5 to 10 percent in Asia.