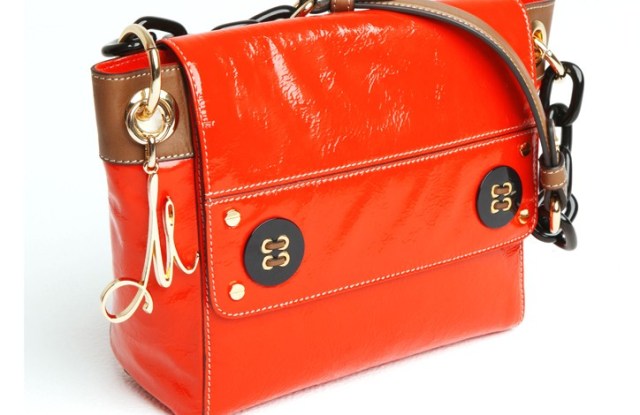 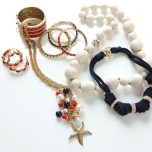 Flirty sportswear brand Milly has launched a nautical-inspired handbag line and is ramping up its profile in jewelry.

This story first appeared in the August 10, 2010 issue of WWD. Subscribe Today.

“I set out…with the same philosophy and aesthetic as my ready-to-wear collection: smart, sexy and glamorous…a modern sensibility with a vintage vibe,” said the brand’s designer, Michelle Smith.

The handbags, which eventually will include 19 silhouettes, including tote, clutch, hobo, cross-body, satchel and framed styles, adhere to Milly’s playful aesthetic, with a color palette consisting primarily of white, navy and coral. The signature Milly bag is crafted of Italian patent leather, with a magnetic-closure flap top and a convertible leather and resin strap. Smith incorporated hardware detailing, such as oversize nonfunctioning buttons, a tapestry-inspired turnstile closure and discreet Milly charms throughout the line.

Smith, who honed her attention to detail while working at Hermès, Christian Dior and Louis Vuitton, said she is her “own toughest customer. My goal has been to create a truly designer-level handbag in terms of design detail, quality materials and finishing, but at a contemporary price point. This philosophy has set Milly apart from its competition in ready-to-wear, and I believe it will do the same for our handbag collection.”

About 80 percent of the bag line is leather, and the rest is a sampling of nylon and canvas. The items will retail from $250 to $525.

The handbags will share their formal debut with Milly jewelry, which was soft launched earlier this spring. The brand’s spring runway show will herald the full rollout of the jewelry collection, as well as the official handbag launch.

The jewelry collection continues the nautical theme and features whimsical seaside nods, such as a white rope bracelet interlaced with gold and rhinestones — a play on the braided surfer bracelets popular in summer. The line, which retails from $85 to $275, includes white and gold resin chains; red, white and blue striped bangles, and starfish pendants.

The Milly signature print is incorporated throughout, either with fabric-wrapped beading or a bangle with the tapestry pattern silhouetted in gold.

The handbags and jewelry will be delivered to retailers monthly, beginning in January.

Smith and Oshrin founded Milly in 2000 as a preppy, feminine collection. The brand has grown steadily and does about 75 percent of its business domestically, 15 percent in Europe and 5 to 10 percent in Asia. Milly opened its first international, freestanding store last year in Tokyo, and launched an e-commerce site in March.