The Bal Harbour and New York City store openings are part of a larger focus on the U.S. market.

The Missoni store on Madison Avenue in New York.

Missoni is expanding its retail presence in the U.S. market.

The Italian luxury brand will open a store today at the Bal Harbour Shops in Bal Harbour, Fla., with another Florida unit in the cards for next year, followed by a unit in California in 2020, according to Angela Missoni, chairman and creative director.

The Bal Harbour shop is 1,200 square feet and carries the women’s, men’s and children’s collections, along with its swim and beachwear lines. It has a rose copper frame designed to look like a shadowbox and the aesthetic is intended to mimic a beach sunset.

The Bal Harbour store follows on the heels of the opening of a new flagship on Madison Avenue in New York earlier this fall. The 3,800-square-foot store at 676 Madison Avenue on 61st Street, replaces an older store at 1009 Madison Avenue at 78th Street that closed when the new location was completed.

Missoni said since the New York store’s opening in mid-October it has performed well. “We’re very pleased,” she said. “We had a very good month even though we haven’t had an official opening yet. We think there’s a lot of potential.”

That store is similar in design to the brand’s other units in Milan and Paris, but with “an advanced vision,” said Missoni, who designed the store with Spanish architect Patricia Urquiola. It carries the women’s and men’s collections along with beachwear, accessories and soft furnishings from the Missoni Home line. It also offers the new sunglasses collection from the licensee Safilo. 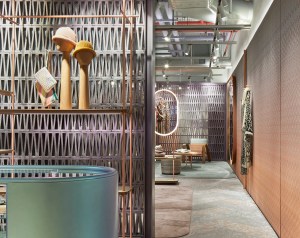 The design of the Missoni store is similar to Milan and Paris.

Missoni said she was perhaps most excited about the ceiling in the store. “It’s very special,” she said of the exposed crisscrossed pipes that continue to be visible. She said they were painted in colorful hues and textures that are a nod to the brand’s ethos.

“As soon as I saw this new location for our New York store, I envisioned the opportunity to create an environment that is bold, modern and innovative,” she said. “The space is filled with eye-catching details that are luxurious but also unexpected — like the colorful ceiling pipework. It’s very Missoni.” 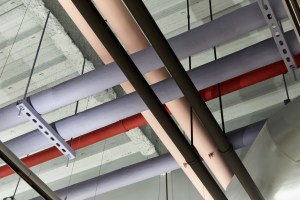 The open ceiling was a big selling point for the company.

Following the opening in Bal Harbour will be an M Missoni store that will open in Aventura, Fla., in January. “Then we have a plan in 2020 for Los Angeles,” she said.

The U.S. has become a point of focus for the brand in recent months. In October, the company appointed Antonio Moltoni as chief executive officer of Missoni USA, a new position that involves overseeing the retail and wholesale expansion of the Missoni and M Missoni brands.

Last year, FSI took a 41.2 percent stake in the Missoni group, with the family retaining 58.5 percent of the shares of the company that was founded in 1953 by Rosita Missoni and her husband Ottavio. The goal was to focus on international expansion, product extension and retail development in key markets.

Earlier this month, vice chairman Michele Norsa acknowledged that there is talk of a possible public listing and the company will “evaluate the opportunity” starting in 2023. Until then, Missoni will continue to build its organization, product offering and store count. In June, Norsa, who is also a partner in FSI, said the fund was investing 10 million euros to develop the U.S. and Asia. Overall, the company operates around 70 stores globally. Missoni’s sales last year totaled 150 million euros.