Nonprofit Mittelmoda awards Nicola Morgan from the University of Northumbria in the U.K. the top prize. 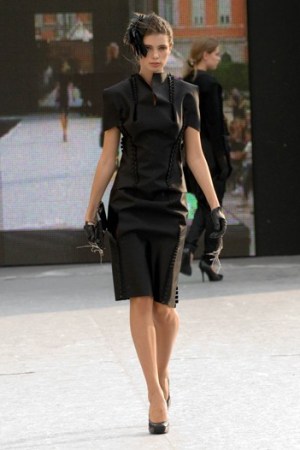 MILAN — As the new president of Mittelmoda, Matteo Marzotto has big plans for the Italy-based fashion contest, whose 17th edition was held on Sept. 11 in Gorizia, Italy.

Selected from among 26 international collections, Nicola Morgan from the University of Northumbria in the U.K. was awarded the top prize of 10,000 euros, or $14,668 at current exchange. Laure Lamborelle, from the Royal Academy of Fine Arts, Belgium, was awarded the SMI Sistema Moda Italia prize of 5,000 euros, or $7,333, for the best experimental collection. The Italian Chamber of Fashion granted Ekaterina Demidova, from the London College of Fashion, an award of 2,500 euros, or $3,666, for the most creative collection. Among Mittelmoda’s special awards, Levi’s granted 5,000 euros, or $7,332, to James Hillman, from London’s Central Saint Martins, whose designs will become part of Levi’s archives in San Francisco, and the H&M award for the most global and innovative collection went to Nicholas Nybro-Jensen, from Denmark’s Designskolen Kolding.

In his new position, Marzotto’s priorities are to shift Mittelmoda’s dates from September to a less fashion-packed month; increase the contest’s international visibility; round up a more diverse jury, and recruit a high-profile designer to boost the event each year.

Traditionally held in Gorizia, Marzotto is also mulling the idea of moving the contest to Milan, or perhaps holding a show or an event related to Mittelmoda, which launched in 1993, during Milan Fashion Week. Marzotto said the dates will probably change next year, likely moving to May.

In collaboration with the Italian Chamber of Fashion and industry association SMI Sistema Moda Italia, the nonprofit Mittelmoda has over the years partnered with companies such as Benetton, Furla, La Perla, Levi’s and Missoni, and launched designers such as Boudicca’s Brian Kirby, former Chloé creative director Paulo Melim Andersson, and Ann-Sofie Back, whose signature line shows during London Fashion Week.

“Mittelmoda draws students from the most prestigious schools around the world, from Antwerp to Central Saint Martins or Japan’s Bunka Fashion College, who have yet to shape their career,” said Marzotto. “We are not looking for a young designer, but for a talent who will become a designer.”

Last year, 800 young designers from 48 countries and 620 schools took part in the contest, with 25 finalists who presented six outfits each in a 40-minute runway show. The 10 winners were awarded financial support or experiences at fashion houses from H&M to Missoni. Marzotto, Valentino’s former chairman, bought the house of Vionnet earlier this year, teaming up with Marni’s chief executive officer Gianni Castiglioni, and tapped Rodolfo Paglialunga, one of Miuccia Prada’s longtime assistants, to revive the brand. He also sits on the board of watch and jewelry brand Morellato & Sector, is president of Enit, Italy’s national agency for tourism, and has formed a luxury real estate group, Montecristo Holding.