The brand took over five floors of the iconic Park Hyatt. 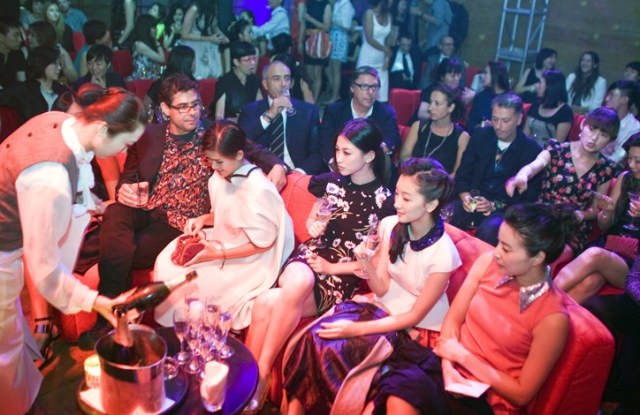 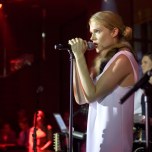 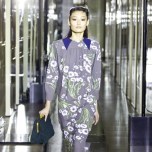 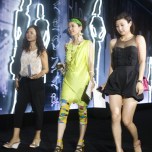 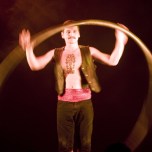 SHANGHAI — Miu Miu tapped into the world of glitz and kitsch for a cabaret-themed fashion event Thursday night, taking over five floors of the city’s iconic Park Hyatt hotel.

Models made their way down a reflective runway that weaved through three floors of dining rooms in the hotel, which climbs a staggering 93 stories into the sky. In contrast to the quiet elegance and World War II-era palette of the Forties-inspired Miu Miu collection, Hollywood set designer Carl Sprague transformed the Park Hyatt’s generally austere, Zen-like decor into a neon, plastic, mirrored fantasyland.

Sprague said he was tapped for the gig because Miuccia Prada — who Sprague describes as a “huge film buff” — was looking for an aesthetic reminiscent of his hyper-stylized work as art director on “The Royal Tenenbaums.”

“This is a maximalist approach, there’s nothing minimalist about it,” Sprague told WWD ahead of the event. “It’s fun and a bit magical, you’re kind of on this flying carpet up here in the sky and certain laws of physics are being very strongly, not suspended, but we might be able to create the illusion that we’re all floating up here on a cloud for at least a few hours.”

From the dining rooms, with their supper-club feel and big band soundtrack, the party moved upstairs to the top floor of the hotel, which had been transformed into a “Cabaret Club” — complete with tobacco-smoke haze. Performances from tap-dancing Argentinean twins, quick-change artists and a whip-cracking cowboy entertained an enthusiastic audience.

The 92nd floor bar played host to U.K. singer-songwriter and sometime model, Florrie, who kept the fashion crowd dancing to her infectious pop beats until midnight, when international DJs Misty Rabbit and Dan Lywood took to the stage until the wee hours.

This was the second major event the Prada Group has held in mainland China this year — the first, a Beijing-based recap of Prada’s spring collection in January.

Prada chief operating officer Sebastian Suhl declined to discuss business matters as the company, which listed on the Hong Kong stock exchange last month, is in a blackout period before releasing its financial results. But he did allow that Prada is making a major push into China.

“Shanghai is a massive business, but I think there is a misconception that the China market starts and ends with Shanghai and Beijing,” Suhl said. “We now have stores in a number of second-tier cities around China and we’ve really only scratched the surface in terms of growth opportunities here.”

According to Suhl, events such as the Shanghai extravaganza are not just about raising the profile of the Prada Group.

“This event isn’t just about Shanghai, or even just about China, it’s also about Asia in general and it’s part of our strategy to hold these regular events with key people from business, government, celebrities, socialites and media from all over Asia and beyond,” Suhl said. “Our Asian sales, here in Asia and from Asians traveling overseas, accounts for 50 percent of our sales, so it’s a very important market.”

The morning after saw the Miu Miu cavalcade head to Los Angeles for the premiere of “Muta,” a short film by Argentinean director Lucrecia Martel. “Muta” is the second chapter of The Miu Miu Women’s Tales, a series of short films by distinctive female filmmakers.