The three-level store, in keeping with the brand’s gilded design concept, is the fourth freestanding boutique in the country. 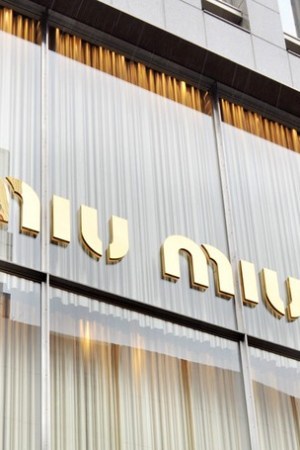 TOKYO — Miu Miu is opening the doors on a 4,628-square-foot flagship in Ginza.

The three-level store, in keeping with the brand’s gilded design concept, is the fourth freestanding Miu Miu store in the country. It opens to the public on Saturday.

The store is selling a series of special products to commemorate the opening, including handbags made of goatskin and mink and glittery lace up shoes.

Prada said in September that it registered a “good recovery” in Japan for the six months through July 31. It said sales rose 8.2 percent, or 6 percent at constant exchange rates, for the period.

In its IPO prospectus, Prada said that Japan accounted for 17.9 percent of Miu Miu’s annual sales, or 63.34 million euros, or $83.6 million at average exchange rates, for the year ended January 31. Prada listed in Hong Kong this summer.

“Ginza is in line with the ongoing geographical expansion of Miu Miu stores in Japan and testifies the strong commitment of Miu Miu to the Japanese market,” he said.