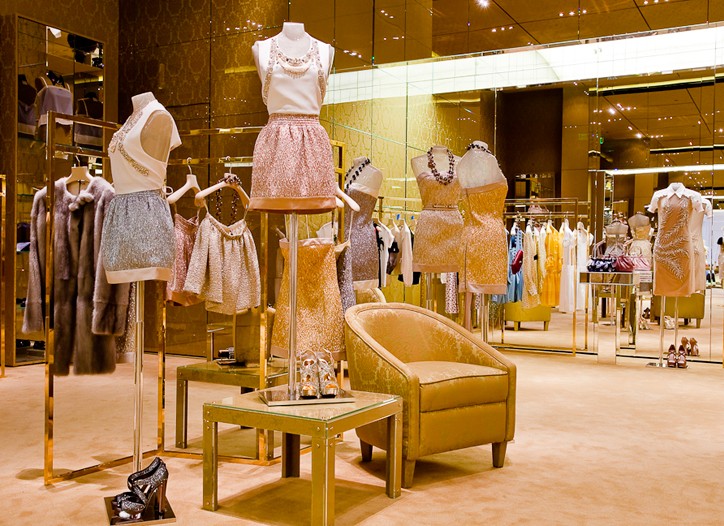 The Prada Group is heading West.

Miu Miu last week opened a 4,500-square-foot store at the Crystals in Las Vegas, a 500-square-foot retail and entertainment district at the sprawling CityCenter. The store, Miu Miu’s seventh in the U.S., was designed by Roberto Baciocchi with more gold tones than a high roller’s suite.

Meanwhile, Prada on May 4 will unveil a 5,070-square-foot store at South Coast Plaza in Costa Mesa, Calif. It will be Prada’s 12th unit in the U.S. and third-largest in the country.

The Prada store, also designed by Baciocchi, will offer ready-to-wear, handbags, accessories and footwear for women and men. A polycarbonate curtain frames the store entrance and pastel green canvas lines the walls. There’s ivory leather-clad furniture in the women’s area and rosewood and polished steel furniture in the men’s.

While Las Vegas was hit hard by the recession, there’s high hopes for Miu Miu. Sebastian Suhl, chief operating officer of Prada Group, said the Prada boutique at the Bellagio in Las Vegas has been experiencing high double-digit growth since last year, a trend that’s continuing.

“We continue to regard Las Vegas as a major U.S. market,” Suhl said, adding it should be on par with the group’s biggest markets. “Hence, our commitment to Las Vegas and our 2010 investments, which will most likely be followed by others in the coming years.”

Miu Miu declined to discuss sales figures, but Farid Matraki, general manager of the Crystals, said, “I got the numbers, and they have done unbelievably [well]. Due to issues surrounding the [Icelandic] volcano, some of the merchandise was stuck in Europe. They decided to open on Friday with the limited edition Casino Royale pieces they were waiting for. They sold most of them,” said Matraki. “The people buying were not necessarily a young crowd. It’s a middle-aged crowd.”

The Miu Miu store is divided into three distinct sections for women’s wear, footwear and handbags and accessories. Walls, display elements, seating, countertops and tables are covered in gold damask. Large miror-clad beams signal the transition from one environment to another.

“The Crystals is very different from existing Las Vegas shopping malls,” Suhl said. “It is unique in terms of its architecture and the proximity of retail to the gaming floor. Its general positioning is commensurate with luxury brands.”

Miu Miu is in the advanced stages of planning stores in several new U.S. markets, said Suhl, adding there are at least five to 10 U.S. cities that could be tapped for a Miu Miu store.