In the Funhouse: Miu Miu Opens on 57th Street

The opening of Miu Miu’s third store in New York today is a further testament to the brand’s ongoing growth and bullish retail expansion, despite the economy. 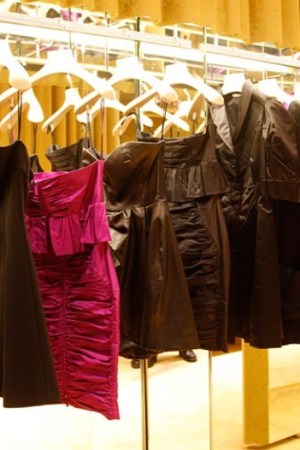 MILAN — The opening of Miu Miu’s third store in New York today is a further testament to the brand’s ongoing growth and bullish retail expansion, despite the economy.

“Miu Miu, with its strong and independent identity, has reached in just a few years a worldwide success and recognition,” Patrizio Bertelli, Prada’s chairman and chief executive officer, told WWD. “The growth registered in all its sectors confirms its position as one of the global reference brands in the luxury industry. The opening of the new store on 57th Street in New York is consistent with this approach and with the brand’s values and spirit.”

Last year, Miu Miu had sales of 220 million euros, or $277 million at current exchange, a company spokesman said. The brand has seen 30 percent sales increases annually over the past three years.

But while the 57th Street opening is a significant one, Prada has even more Miu Miu stores up its sleeve. Other U.S. openings planned for the next 12 to 18 months include Las Vegas; Costa Mesa, Calif., and Bal Harbour, Fla. These units will follow recent ribbon cuttings in Los Angeles; Macao, China, and inside Galeries Lafayette in Paris.

Bertelli said the New York store is part of Miu Miu’s development strategy, which planned 10 store openings for the second half of the year. That plan has remained in place despite the global recession.

Miu Miu is also reviewing its wholesale clients to make sure they continue to match the brand’s positioning.

“If in such circumstances one has the ability to concentrate on his points of strength — in our case design innovation, product excellence, detail care and uncompromised quality applied to each single phase of the process — without losing sight of a careful business management, when the market will boost again, the groups who seized the best distribution opportunities will find themselves in a primary position,” said Bertelli. “From this angle, Miu Miu’s opening on 57th Street is a rightly timed investment.”

The new unit spans three floors, or 4,860 square feet, with the upper level dedicated to special events that will revolve around art, culture and fashion.

The first one, which will kick off with today’s opening, is called “Modern Portrait Gallery” and consists of special renditions of major Miu Miu ad campaigns, featuring celebrities such as Kirsten Dunst, Lindsay Lohan and Chloë Sevigny. The portraits have been adapted in Pop Art versions by Miuccia Prada and AMO, Rem Koolhaas’ think tank. Some of the blown-up images have already plastered Miu Miu’s Parisian show venue for the spring collection.

A capsule line of clothes and accessories has also been created especially for the 57th Street opening. The collection consists of limited edition pieces, such as five models of silk dresses and shifts with Pompeii-inspired prints for daywear and beribboned silk bloomers and bustier dresses for evening. Accessories include polka-dotted sky-high pumps, open-toe platforms with ribbons and devorè satin clutches and minaudières. Black, bougainvillea pink, violet and green are the color choices. Between apparel and accessories, about 130 pieces will be produced overall.