The sprawling new headquarters of the foundation, which was first established in 1993, cover 205,000 square feet.

By Alessandra Turra and Luisa Zargani on May 2, 2015
View Slideshow 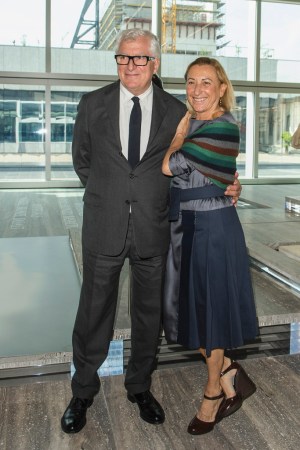 MILAN — Patrizio Bertelli doesn’t feel either powerful or a patron of the arts.

“We want to be proactive, stimulate artists and propose [an artistic] offer for the future, drawing young people closer to concepts that are often forgotten,” said Bertelli on Saturday as he unveiled Fondazione Prada’s Milan home, responding to a question about power and patronage. “There are no ulterior motives to this investment, which springs from a cultural need. Fashion is everything that surrounds us.”

The executive declined to say just how much the investment amounted to, but the sprawling new headquarters of the foundation, which was first established in 1993, cover 205,000 square feet. The complex is made up of seven existing buildings recovered from a distillery dating back to 1916 and three new structures, all located in Largo Isarco, in the southern part of Milan. The project was developed by OMA, led by Prada’s longtime architect, Rem Koolhaas.

Bertelli reiterated that there is no overlap between Fondazione Prada and the Prada fashion house’s activities. “We’ve never held art exhibitions to coincide with our fashion shows, that would be unkind to the artist,” said Bertelli, to which his wife Miuccia Prada added: “And to the designer, too.”

Eliciting a round of chuckles, this was the only comment made aloud by the designer, who was sitting in the audience of the cinema, which is part of the complex, during a press conference held to present the space. Bertelli and Prada are both presidents of the Fondazione, while Germano Celant is the artistic and scientific superintendent. Bertelli also highlighted that there has never been a commercial connection between artists and the brand’s fashion.

“We have forged a challenging path intellectually and economically, but we want to be a jewel in the crown,” said Bertelli, setting a high bar for the foundation. Lamenting a surrounding, generally selfish behavior, Bertelli added, “We go our own way, and we hope to stimulate others to manifest themselves, to open up the system, to communicate. The foundations of Made in Italy lie in culture as expression of manufacturing, cinema, design…” Milan is an industrial and economic capital, he added, as he hoped the Fondazione Prada site will be an injection of energy to Milan.

“This is an important project for both Milan and the whole country. It’s a gift to Italy. In our country for many years, people concentrated only on the preservation of the artistic heritage and it seemed there was no space for contemporary art,” said Dario Franceschini, Italy’s minister for culture and tourism, who attended the event. “This project shows that it’s possible to keep the two things together. We have to invest in the future and in innovation, which is the direction taken by Fondazione Prada.”

Franceschini also said that thanks to projects like the new Fondazione Prada, Milan, after the universal Expo, is destined to become a point of reference in Europe in the next 10 years if it will focus on innovation, design, art and culture.

To wit, Celant observed that the project is “international” and that the foundation is “open to other languages: literature, cinema, ballet.”

Both Bertelli and Koolhaas underscored the adaptability of the space, which allows different opportunities depending on the art.

Koolhaas said the renovation was respectful of the buildings that were in existence. “The old and new work together seamlessly, and there is a collection of spaces, some secret, some obvious,” he said. The three new buildings are called Podium, Cinema and Torre (tower). The latter will be completed next year. An existing building called “Haunted House” is covered in gold leaves. “This was a last-minute inspiration, to give value to a small and seemingly not important, mundane element. Gold is very cheap versus marble or paint,” clarified Koolhaas, who made the “discovery that gold reflected the light and contaminated the environment, depending on the light changes.” The tower houses a permanent installation conceived by Robert Gober that includes two works by Louise Bourgeois.

The cinema, which debuted with “Roman Polanski: My Inspirations,” can turn into an open theater. Koolhaas referred to the “enormous collection of different activities,” in the building complex, which shows partly covered areas, streets and courtyards, has an industrial quality and faces railway tracks. “There is no sense of claustrophobia,” the architect noted. “We worked for the neighborhood, avoiding a tsunami of gentrification by building additional elements. This is a very Italian project with a Northern mentality,” said Koolhaas, who hails from the Netherlands.

He praised the “efficiency of fashion,” underscoring its difference of speed. “In eight hours they can organize something sublime, with us it takes at least eight years,” he said, referring to his own category.

“Exhibitions are not for clients, for curators, for sponsors, they are for those who visit them, they are meant to make people think,” said archeologist and art historian Salvatore Settis, who curated the “Serial Classic” exhibition, spanning over the two levels of the Podium. “Miuccia Prada once said this exhibition is a ‘political gesture’ and I think she meant that while it’s pretty common that contemporary art is welcomed in archeological museums, the opposite is very rare. We turned the rules upside down.”

The “Serial Classic” exhibit, which is dedicated to classical sculpture, collects about 60 works and explores the idea of imitation in the ancient Roman culture. In particular, Settis put the focus on the fact that, while classical art generally is associated with an idea of uniqueness, copies of older art works played a pivotal role in ancient Roman culture, both during the late Republican era and the Empire.

The South Gallery and the Deposito warehouse host “An Introduction,” which collects more than 70 art works, showing the different inspirations that led Prada and Bertelli to create Fondazione Prada. Among the pieces on display are works from the Sixties, by the likes of Yves Klein and Piero Manzoni; a “Madonna del Bauhaus” from 2012 by contemporary artist Francesco Vezzoli shown on an engraved wooden cabinet from the late 15th century, and works by Jeff Koons, Lucio Fontana, Roy Lichtenstein and Mario Schifano. The last part of this group includes a selection of cars reworked by artists including Carsten Höller and Rosemarie Trockel, Gianni Piacentino and Sarah Lucas.

Curated by Nicholas Cullinan, the “In Part” exhibition, located in the North Gallery that occupies the spaces of the former industrial site, is focused on the theme of the synecdoche (where a part refers to the whole). Works by a range of artists, including David Hockney, Yves Klein, Robert Rauschenberg and Francis Picabia, are on display.

The Cisterna, a tall building featuring three large spaces, hosts the first exhibition of the “Trittico” project curated by the Thought Council, a group of consultants who help to define the exhibits. For the opening, three pieces from the Prada Collection, including Eva Hesse’s “Case II,” Damien Hirst’s “Lost Love,” and “A cubic meter of soil” by Pino Pascali, are exhibited.

The complex also includes the Accademia dei Bambini, which is Fondazione Prada’s first project created specifically for children and conducts multidisciplinary activities. A library will open next year. There is also the Bar Luce, designed by film director Wes Anderson, which is evocative of a Milanese café, with an arched ceiling that recreates a “miniature” version of the vaulted glass roof of the city’s shopping arcade Galleria Vittorio Emanuele II, which houses Prada’s boutiques.

Fondazione Prada opens to the public on May 9. Its Venetian outpost will continue to operate in the 18th century palazzo Ca’ Corner della Regina.