MM6 Maison Martin Margiela has opened a 1,400-square-foot store for its casual, New York-inspired collection, at 91 Grand Street in SoHo. 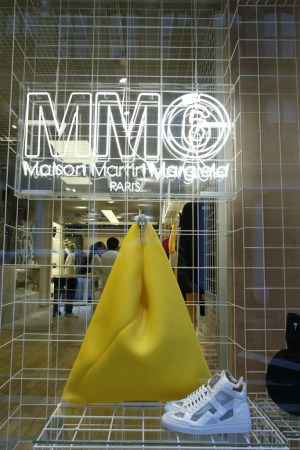 MM6 Maison Martin Margiela has opened a 1,400-square-foot store for its casual, New York-inspired collection, at 91 Grand Street in SoHo.

It is the second MM6 unit in Manhattan. A significantly smaller unit — about 500 square feet — opened on Bleecker Street in the West Village in 2012. The Bleecker Street store was the first freestanding MM6 shop.

The company felt that the Bleecker Street customer is different from the SoHo residents and tourists it hopes to attract at the Grand Street address. “Consumers and tourists tend to stay in a radius for several blocks,” the company said. “There’s opportunity to show the brand to a whole new demographic.”

The brand’s roots include French DNA, but it’s New York-bred, “a culture that is also unmistakably New York,” the company said. Given that positioning, “opening other stores in Manhattan is not out of the question. We’re now focusing on downtown.”

The company is also occupied with MM6’s opening this week in London. An MM6 store was unveiled in Paris late last year.

MM6 was created in 1997 as a casual brand with contemporary cuts and prints aimed at a customer younger than that of the Maison Martin Margiela collection. Unique fabric treatments create everyday clothes with a utilitarian and functional approach. The collection also emphasizes soft volume and draping.

The line is shown during New York Fashion Week.

The store has light gray walls that are interrupted by white grids. Some of the grids are filled with tiles and others are left bare. It’s part of the deliberately unfinished concept for the store. Clothing will hang in cubbies within the grids. There are also shelves for accessories and two types of flooring, a light wood parquet and a white concrete “carpet” that is a tromp l’oeil. Lighting stems from LED poles spring from the floor and are linked together by white plastic cable for an “under construction” look.

The back of the store is completely mirrored with a skylight above.

The Maison Martin Margiela brand has been controlled by Italy’s OTB since 2002. The label’s founding designer exited his namesake house in 2009 and it is now designed by an in-house design team.