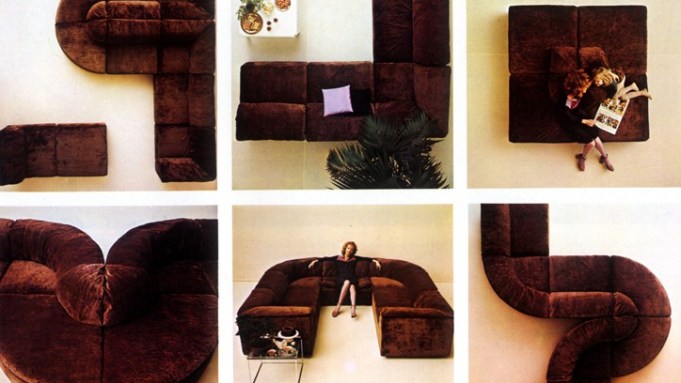 PARIS — The most sought-after names today in French midcentury design — Jean Prouvé, Charlotte Perriand and Pierre Paulin — represent but one letter in the alphabet.

There was an explosion in modernist furniture in France after World War II, a phenomenon documented in a colorful and comprehensive way in “Mobi-Boom,” an exhibition opening at Les Arts Décoratifs here Sept. 23 and running through Jan. 2.

“We want to show the richness of this generation,” said curator Dominique Forest, who gathered some 250 pieces of furniture by roughly 100 French furniture creators who were deeply affected by sweeping social changes and the possibilities offered by new materials, from foam and fiberglass to Formica.

The exhibition covers 1945 to 1975: the early years defined by modest, streamlined and functional designs; the latter ones morphing into a groovier, more hedonistic Pop esthetic exemplified by colorful, inflatable chairs and anything-goes sectionals.

It was a fecund period in France, when designers were inspired by the arrival of television and a shift to more compact, standardized apartments — leading to low-slung and multifunction furniture and lighting, along with what was practically an obsession with storage and the efficient use of space.

It was an industrial phenomenon, too, as designers teamed up with manufacturers who “democratized” design with large production volumes and wide distribution, Forest said. Prisunic, for example, sold modular beds and other furniture by mail order from 1968 to 1976.

Forest noted, however, that many French citizens, proud of their patrimony of Baroque and Rococo designs, held fast to their family heirlooms, making modernism a tough sell. Indeed, some designers had to seek out manufacturers and distributors in other countries, like Germany or Japan. Others saw their prototypes stuck at that phase.

Forest noted that French designers did not work in isolation and took cues from modernist design movements elsewhere, notably Scandinavia, Italy and the United States. Knoll, for example, opened a Paris boutique in 1951 deemed revolutionary for displaying furniture in room settings, rather than just side-by-side like ketchup bottles in a supermarket.

Roughly half of the exhibition is organized according to manufacturer, including Airborne, a foam specialist that produced works by Olivier Mourgue and saw its designs hit the big screen in Stanley Kubrick’s “2001: A Space Odyssey.” The petroleum crisis sounded the death knell for the firm in 1974, Forest said, noting that only a handful of the makers are still around today.

Many of the creators featured — the likes of Pierre Guariche, Roger Tallon, Michel Boyer and Bernard Govin — risked being forgotten, but are bound to become newly collectible thanks to this showcase.