The strategy is aimed at capturing new customers who won’t wait months for delivery of next season’s purchases. 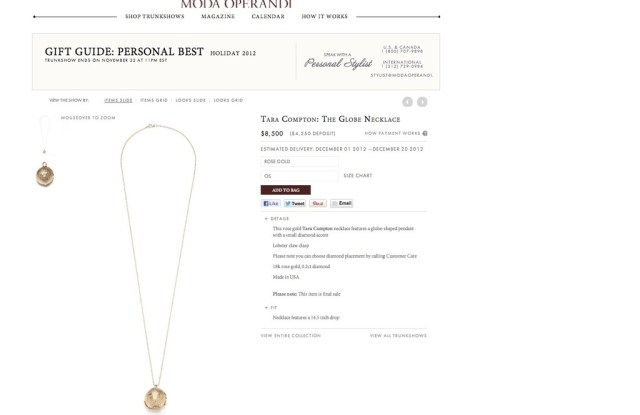 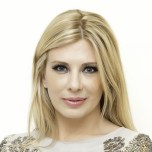 The strategy is aimed at capturing new customers who won’t wait months for delivery of next season’s purchases while also capitalizing on the Moda Operandi name in the luxury e-tail arena.

The site, launched in February 2011 by founders Aslaug Magnúsdóttir and Lauren Santo Domingo, is introducing its foray into immediate deliveries with a series of holiday gift shops that go live today. The full launch of the initiative will come Dec. 7 when a redesign of the site is introduced, offering customers the choice of shopping a complete in-season boutique as well as Moda Operandi’s designer trunk shows, which provide preorder access to an array of runway collections.

“We want to better serve our current customers and reach a new customer base. We’ve been able to establish a name in various pockets of the world and we want to take advantage of our positioning and build our market share quickly,” said Magnúsdóttir, chief executive officer of Moda Operandi.

The company expects in-season sales to account for 10 to 15 percent of total volume this year, growing to 25 percent next year. While trunk shows will remain the core sales driver for the next few years, the in-season business could surpass preorders within three to four years, said Magnúsdóttir.

The move into traditional e-commerce means Moda Operandi will be placing buys, stocking inventory, processing returns and clearing end-of-season merchandise for the first time. It will also compete with a number of established e-commerce players like Net-a-porter, Saks Fifth Avenue and Neiman Marcus, whereas previously it had much of the designer preorder business to itself.

“Our core business model is one of the most beautiful business models. There’s no inventory risk, it’s 50 percent cash up-front and you come through with 100 percent sell-throughs,” admitted Magnúsdóttir of pre-order sales. “When we tell [our investors] we’re going to start doing traditional retail, some of them were like, ‘That’s no good compared to your traditional business model.’”

The new strategy opens up a much larger market to Moda Operandi. As with many categories, the luxury market is growing at a faster rate online than offline. According to an October study from Bain & Co., e-commerce sales of luxury brands are forecast to jump 25 percent in 2012 to 7 billion euros, or $9.06 billion, compared to a 10 percent increase for the overall global luxury market.

“The Moda Operandi customer has a broad range of luxury e-commerce needs and this is a natural extension of the unique and distinct customer relationships we’ve built,” observed Tony Florence, a general partner at venture capital firm NEA, the largest investor in Moda Operandi. “We’re taking on inventory and it’s a different business than preorder, but we think from a return on capital perspective it should be a comparatively attractive business.”

In January, Moda Operandi will move from its 5,000-square-foot offices at 72 Madison Avenue to a 25,000-square-foot space at 315 Hudson Street, which will house its headquarters along with a new warehouse and fulfillment center and a photo studio. About 13,000 square feet will be dedicated to office space, about 8,000 to inventory and the remainder for the photo studio.

Moda Operandi currently works with about 300 brands in its trunk show business. Second-half revenue in 2012 is on track to triple from the same period in 2011. About 60 percent of sales are from the U.S. and 40 percent are international.