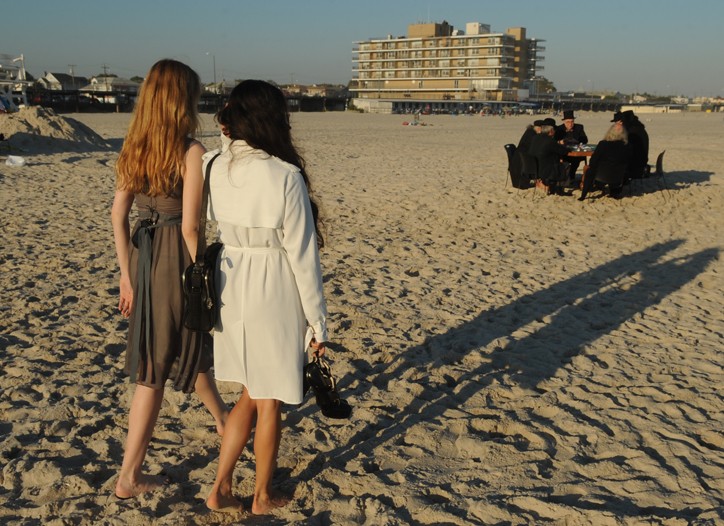 It’s a sunny weekday at Atlantic Beach on Long Island. Beyond the beach club, past the occasional clot of kids, there’s a group of guys playing poker — around an actual poker table planted in the sand. A few feet away, a nymphlike redhead gazes at them through a camera on a tripod almost as tall as she is. After a few minutes, she directs another girl to stride, chin up, toward the players.

“Is this film taking place in the 1800s?” asks a beachgoer. She points to the six men, dressed in black coats; one wears a bowler, another a top hat, and most sport bushy white beards. “No? So are they religious men? No? Then why are they dressed like that?” Other bystanders continue to fire similar questions. Is this a music video? An indie movie?

Actually, it’s a fashion film — one of four commissioned by Phillip Lim and Lane Crawford for an exhibit, “4 x 3.1,” which opened this weekend in Hong Kong and will debut in Beijing this Friday.

The lithe redhead is New York-based model-turned-photographer Elle Muliarchyk. She’s best known as the girl who, in 2006, took guerrilla-style photographs of herself in store dressing rooms. Now she’s directing a brief short that explores the idea of “the 3.1 Phillip Lim girl.”

The Cliffs Notes version of the narrative: Girl walks through New York City’s claustrophobic spaces — Stabber Alley in DUMBO; Times Square — then stumbles on an abandoned building. Girl enters and ends up on this beach.

“I had complete creative freedom,” says Muliarchyk, noting the only request was that her protagonist wear a custom 3.1 Phillip Lim trench, shoes and handbag. Others participating in “4 x 3.1” include Beijing’s Rain Li, Paris’ Yi Zhou and Hong Kong’s Victoria Tang. “I think we represent a global citizen,” explains Lim of his decision to choose four such far-flung artists. “It’s not about a certain geography or a certain look. It’s about a certain attitude.”

For Lim, creating a brand identity has been at the top of the designer’s to-do list lately. Just this past September, for example, he dedicated his collection to “the female version of the dandy, the dandie-lion,” as he explained at the time. Turns out, that’s not a one-season leitmotif; it’s the new 3.1 Phillip Lim catchphrase. “I’ve always known what I’ve been about, but for media, marketing and the public, you have to put it in a context that people can understand,” Lim explains. “But you can’t verbally or tangibly hold down a mood. You can only describe.”

Thus, the introduction of these four videos, which don’t exactly scream “branding enterprise” — but are. “After discussing a lot of opportunities,” e-mails Amy Schmitt Seabolt, director of marketing, events and public relations at Lane Crawford, “we kept going back to the idea of ‘Who is the Phillip Lim girl?’”

The films are being launched at Lane Crawford, with appearances by Lim, as well as on a separate microsite; it’s all an upgrade on the traditional trunk show. “Multimedia is the future of fashion,” remarks Lim. “We’ve all been to trunk shows before; we’ve all done that, seen that. You have to innovate and find ways to reinvigorate.”

Perhaps his company’s fifth anniversary this fall is putting the designer in a reflective mood. But Lim denies that the milestone prompted these new projects, including a major one that may be interpreted as a birthday bash. On Saturday, Lim will hold a fashion show in the Forbidden City, at the Dong Bian Men Watchtower. It’s a big deal for a young designer such as Lim to stage a show like this. Precursors include heavyweight brands Fendi, which took over the Great Wall of China in 2007, and Dior, which held its resort show in Shanghai. “China is growing so fast. There is a crazy appetite for luxury,” explains Lim, whose mother is from Guangdong province and his father, from Hunan. “But at the same time, there is also an appetite for what’s new, what’s next. Emerging consumers are realizing it’s time to embrace younger brands because they can be first in line to help build them.”

The Beijing show — coincidentally, the first Lim’s mother will attend — will feature the same spring 2011 lineup he presented in New York, save for the finale of reconstructed cheongsams. Those styles will be available for sale only in the Asian market.

Rounding out Lim’s itinerary in Beijing is a lecture at the Central Academy of Fine Arts, followed by a private dinner hosted by Audi and Vogue China. Here, the designer will present a mini-retrospective of runway exits from the past five years; the looks will be auctioned off to benefit Audi’s Driving Dreams charity for poverty-stricken children in China. “Every new [fashion] talent is coming out in our market now,” he says. “I feel like we had to take a step out and take this chance, this gamble.”

Which brings one to Muliarchyk’s beachside finale scene, partly inspired by the work of filmmaker Maya Deren. The men are playing gods, the cards are blank and the six are gambling with people’s lives. “Joli sits down to play with them, and the cards she touches turn into real cards,” Muliarchyk says. “She causes fantasy and reality to collide.” As for the ending, the Phillip Lim girl runs back through the door and into the streets of New York.