After more than a decade of corporate casual and off-hours looks that were often downright sloppy, the tide has turned. 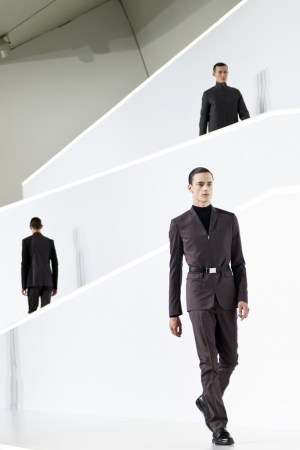 Men are born naked and go to the grave, invariably, in a suit. There are far worse things to wear for an eternal rest—and nothing quite so fashionable to wear right now—thank you, Don Draper; thank you, global economic fashion crisis; thank you, leading fashion designers.

“Suits are cool and attractive and modern again,” declares Alessandro Sartori, creative director at Paris- based Berluti, whose lanky frame is invariably swathed in sleek suits—and whose surname evokes the splendor and potential of tailoring.

“The current generation grew up in an era of comfortable street wear as fashion, and to them a bit of glamour and a tie is fresh and modern,” says Tom Ford, who collaborated with Justin Timberlake on suave looks for his new album The 20/20 Experience and the single “Suit & Tie.”

“There is nothing more fashionable to me than a very well-made suit that fits well,” concurs American designer Thom Browne, who looks like a character from Sloan Wilson’s 1955 novel, The Man in the Gray Flannel Suit, come to life in modern-day Manhattan. Browne cites rising sales of the two-piece wonder garment.

Indeed, after more than a decade of corporate casual and off-hours looks that were often downright sloppy, the tide has turned. Suits have the edge. “The suit has become for many men the new way to rebel,” says Eric Jennings, vice president and men’s fashion director at Saks Fifth Avenue. “That’s why we’re seeing more artists, DJs, athletes, and hip-hop and pop stars wearing suits. Have you seen the way NBA players are dressed when they leave the locker room? It’s very impressive!” Echoing menswear designers and other trend spotters, Jennings also mentions the Mad Men effect, the AMC series that has popularized the suit, along with the high unemployment that is prompting men around the world to sharpen up, whether they are suddenly looking for a job or doing everything to hold on to the one they have.

Meanwhile, weary of the glut of sportswear, menswear designers have plowed their creativity into tailoring the past couple of years, making suits slimmer, sharper, more desirable, and more of the moment.

Dior Homme’s designer Kris Van Assche just returned from Beijing, where he reprised his terrific Gattaca-inspired Fall/Winter show, showing the Chinese that futuristic style needn’t read as cold. As with the original Paris showing, based on the 1997 Andrew Niccol film, there was an emotional tug to the purposeful gait and appeal of a parade of clean-cut young men in trim black suits, white shirts, and black ties.

“There is something to be said about this power dressing—not the kind of power dressing we spoke of in the eighties,” the soft-spoken Belgian designer explains. “I definitely believe a nice suit gives your body an allure. It makes you want to hold your shoulders straight and gives you a different attitude.”

And that’s precisely what Gattaca’s hero, played by Ethan Hawke, dons when he heads off at the end of the movie on a space mission. “I like the idea that I would go and discover planets in a suit, you know, looking smart,” Van Assche muses. “Because usually when we think about going to space, we have these very ugly spacesuits.”

While not a huge fan of science-fiction movies, Van Assche loved Gattaca’s last men-in-black scenes, costumed by Academy Award–winning designer Colleen Atwood. “They looked really smart,” he says. Asked why the heroes in sci-fi films are often suited up, Atwood muses, “It seems that the cleanness of a black silhouette is clean and pleasing in a modern, minimalistic environment, as well as in a busier, more cluttered world.”

And so the foreseeable, and possibly even distant, future will undoubtedly include some itineration of the indefatigable suit.

“I don’t think 2020 will be a huge difference,” says Atwood. “We are still inspired by the suits from 1860 onward. Details change but the suit lives on. The thirties were eighty years ago, and we’re still spinning off those suits, which were pretty amazing.”

Pressed to gaze into her crystal ball further, to what the suit might look like in 2050, she replies: “Who knows, but for some reason I don’t think it will be gigantic.”

Browne begs to differ. “I think if it’s the right suit, it is appropriate for any occasion or time,” he says. “For me, it’s important to maintain that timelessness. This is why I like gray suits. I have pretty much dressed like this all my life. Growing up, my brothers and I all wore Brooks Brothers navy sport coats with gray wool flannel trousers in the winter and khakis in the spring and summer.”

“I’m afraid there is no better garment,” says Karl Lagerfeld, a man who—as Chanel’s longtime couturier—has given its cardigan style for women endless currency. In his estimation, the man’s suit is just as eternal.

“The basic shape of the jacket will exist forever. Shapes and materials may change, but not the basic idea,” insists Lagerfeld, who is never seen wearing anything but, as he feels smothered in knitwear. “I like the clean look of jackets. I hate to feel sloppy,” he says.

“I like tailored shapes, and for me a Dior 48 is perfect for me, and I feel the best dressed that way.”

Advances in fabrics are bound to influence suits of the future, just as they have made the current ones lighter, sharper, and more comfortable to wear. According to Sartori, nanotechnology opens up possibilities to give fibers or finished textiles new qualities, making them resistant to stains and water, or regulating temperature or deflecting magnetic waves, for example. To wit: The truly wrinkle-free, natural-fiber travel suit may truly be at hand. “For sure we would never forget that we want to be confident, cool, looking better, and have comfort,” Sartori says. Van Assche agrees next-generation fabrics are bound to influence the complexion of the suit as it evolves into the future. “It’s about keeping the allure and making it more supple, more fluid,” he says.

“The jacket and pant may change in fit, proportion, and fabric, but there will always be a need for that type of body covering,” concurs Jennings at Saks. “Why? Because the design and cut of the suit makes a man look better. It enhances the appearance of his physique and hides his flaws.”

The suit has certainly become more body-conscious in recent years. Van Assche shuns the word “skinny,” insisting suits should have real shoulders, a waist, and hips. “It’s a more athletic look, which I think is very modern because I do believe that true luxury is also about taking care of yourself: eating healthy food, going to the gym,” he says.

Berluti’s Sartori enumerates all the subtle shape-shifting that adds up to a totally new allure for today’s suit: a shorter jacket, a lower button stance, higher pockets, defined shoulders, and pants that are tapered and cropped with no break.

“I think there’s a lot of power behind the suit,” Sartori says. “It gives more self-confidence. Wearing a suit, we feel better and stronger, more powerful.” “I think men are enjoying clothes now in a great way,” Atwood agrees. “The options are much better than they used to be, and it is OK to like dressing and still be a guy. It does for sure give a person better self-esteem to have on a nice suit [rather] than a pair of baggy nylon shorts and a fanny pack.” For his part, Ford fears that if the masses continue to make less and less effort with the way they dress, “I could see a future where everyone wears only Snuggies. That would be a sad future, however, and one that I hope I don’t live to see.” To be sure, most fashion designers are very attached to the suit, and remember vividly their first brush with tailoring.

Ford trumps them all with his parting shot: “I was born in a suit.”