‘Modern’ is a mercurial adjective, considered imperative to thrive yet difficult to define. Fashion observers weigh in on what it means today.

By Miles Socha and Samantha Conti and Jennifer Weil and Paulina Szmydke on April 14, 2014
View Slideshow 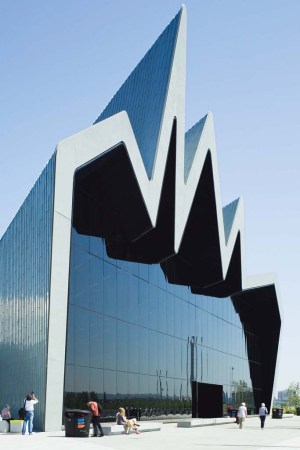 One of the more stinging rebukes one can deliver about a collection is to say, “It wasn’t very modern.”

Yet what exactly is modern in fashion today?

Surveying the fall season, there were nods to the Sixties, the Seventies, Elizabethan times and the medieval period, to cite but a few of a smorgasbord of references. Does that mean retro is in, and modern is out?

According to designers, academics and other observers, the term modern applies more to a feeling or an attitude than a particular look, a quality that is harder to define than to recognize as being something perfectly in tune with the times.

According to Hussein Chalayan, many people use “modern” as a descriptor of anything that’s “a little clean and aerodynamic.” Some confuse it with avant-garde, while others equate it with things that are functional or “futuristic,” the latter often associated with the Space Age looks of the Sixties, and sci-fi movies.

In reality, modernism is “kind of an old movement,” Chalayan says, referring to that loose collection of ideas in design and architecture that emerged in the aftermath of World War I and the Russian Revolution. Modernism, as a major 2006 exhibition at the Victoria & Albert Museum in London demonstrated, actually refers to a variety of styles unified by their rejection of history and applied ornamentation, in favor of abstraction and the transformative power of design.

“I think of my work as classic and modern at the same time,” Chalayan says. “For me, timelessness is more important, something that can look great now and look great 100 years from now.”

Louise Wilson, a professor at London’s Central Saint Martins, says she has never used the words “modern” or “modernist” in her classroom, preferring “contemporary” to connote something suitable for today (the term clearly has a different meaning in the American market, defined by quick-turn trends and lower costs).

“Students should be aware of contemporary fashion in order to confront it,” she says, warning “modern” is as overused as “fashion,” rendering it somewhat meaningless, even passé.

She refers to a Taschen book on Rudi Gernreich as the definitive statement on the topic. The Austrian-born American fashion maverick told journalist Marylou Luther, “When our technology made it possible to put men on the moon, everything developed so quickly that people just couldn’t face it. They took refuge in the past. The past became the security blanket of the present.”

And not much has changed. “We’ve been in a retro period ever since the Sixties,” Wilson marvels.

In Chalayan’s estimation, what defines a “post-post-post-modern” world is how people curate their lives, cherry-picking eras and movements. “In a way, more and more it’s about keeping the base and adding new ingredients,” he says, also noting that technological developments, such as laser cutting, play a strong role. “For me, innovation is about creating new cutting techniques and creating new shapes.”

Wilson agrees, noting Gernreich also nailed it by forecasting that technology would be the main engine of change in fashion, particularly fabric developments. “People wear sportswear with all its technical qualities without necessarily being aware of all of them,” she says.

Asked who is doing modern well in fashion today, Li Edelkoort, trend forecaster from Trend Union and Edelkoort Inc., credits Céline’s Phoebe Philo for reshaping women’s wardrobes and influencing other brands, and cites Marni’s Consuelo Castiglioni, who “perhaps best defines the modern while keeping the perfect pulse on the past.” Edelkoort also mentions Miuccia Prada and Rei Kawakubo as designers who understand their epoch and take risks.

“Thus it is evident that today the most contemporary fashions are designed by women,” she says. “I ask myself if we are witnessing a revival of feminism.”

She points to the strong comeback of tailoring and the importance of combed and worsted woolens. “To dress together like boy and girl in the same clothes could become one of the biggest trends for the near future. Annie Hall will still haunt our memory!”

Pamela Golbin, chief curator of fashion and textiles at Les Arts Décoratifs, also prefers the term “contemporary” to “modern,” and achieving it does not preclude backward glances. “You tend to look at the past to understand the present and create the future,” she explains. “It’s how you use [past eras] today that makes them contemporary.”

In fashion, “the ones that are the most successful are those who are able to associate the past with the needs of the present.”

Karl Lagerfeld confesses he was puzzled why so many designers looked back to recent decades for fall 2014 collections, particularly the Sixties and Seventies, even if fabrics of today are of superior quality and can give retro looks a new cast.

“Do we need retrospectives?” he asks. “There was a little too much for my taste.”

According to Lagerfeld, creating something truly modern means something “right for the moment, reflecting the times and being in the mood of what’s going on.”

In fact, he allows that “there are so many currents and undercurrents in fashion” that sometimes it takes distance to recognize which designs capture the zeitgeist best.

“I think what is modern in fashion is to be able to relate to the garments today. It’s how people interpret things for themselves,” says rising London star Simone Rocha. “Now, that’s modern rather than referencing something that looks spacey/futuristic. It’s about it relating to you today and it feeling unique, that is modern in fashion.”

“People call anything modern today. But it’s more an attitude than a certain look,” agrees Julien Dossena, the young French designer behind the Atto label and the creative director of Paco Rabanne, a brand synonymous with metal dresses and the Space Age era. “Modern is an effortless feeling, built on the idea of freedom—the freedom to choose. When I think modern, I think more of the modern lifestyle of a woman than the actual aesthetic.”

Dossena says making something modern means “being respectful with the customer. A woman has to be able to go to work, she has to be able to raise the kids, to seduce and to build a career without being overdressed or looking like she is wearing a costume.”

In Dossena’s estimation, the most modern object right now is the book, “because it gives you the freedom to read it or not, to go back to it or not and to really focus. It gives you time to think. In that sense it’s more modern than the Internet, which is just an influx of information—it’s super fast and there is too much of it; at the end of the day you are not any smarter.”

Edelkoort lauds the collection Inès de la Fressange designed for Uniqlo, infused with “her innate sense of style and how it translates to budget fashions, allowing the masses to be dressed modern. Maybe being modern today means to be able to live high and low, to be man and woman and to be abstract and narrative sometimes.”

Peter Philips, the newly minted creative and image director of Christian Dior makeup, singles out the Daft Punk smash “Get Lucky,” with Pharrell Williams, as something in music that exemplifies modernity.

“I think it’s very modern because at the same time it’s timeless and new,” says Philips. “Whenever I hear that song…it makes me happy. And I know that when I hear it in 20 years it will still make me happy. It’s a classic.

“Especially in this time now, when you think nothing can be new anymore—that’s new,” he says. “And it’s modern because it will stay modern.”

Asked to identify a few modern things, Lagerfeld points to the architecture of Zaha Hadid, Herzog & de Meuron, Norman Foster and Tadao Ando. Lagerfeld credits Hadid with making a visual “break” from the Bauhaus principles that have defined architecture for decades.

In fashion, he cites Chitose Abe and her label Sacai, whose clothes are “modern. They are not like the old Japanese [labels] from the Eighties and Nineties.”

As for models, there is only one: Cara Delevingne, whom Lagerfeld tapped to open both Fendi and Chanel shows. “I see nothing more modern. She is the right girl for the moment.”

“I like things I don’t always understand. I think my big passion for art is because of this,” he notes. “I can be very attracted to an artist’s work and find it very modern without really understanding exactly, or really analyzing it all the way. It captures my eye, it captures my brain.

Simons observes modern is something that registers “at the level of the senses” rather than a “theoretical” idea.

“Feelingwise, it has to feel right for this moment in time. I think that’s also so specific for fashion, actually so much more, I think, than any other creative form, whether it’s architecture or art,” he says. “I think it’s very important for fashion that it’s right at this moment in time because when it’s not, what’s the sense because it’s only there for six months anyway—and lately even less.”