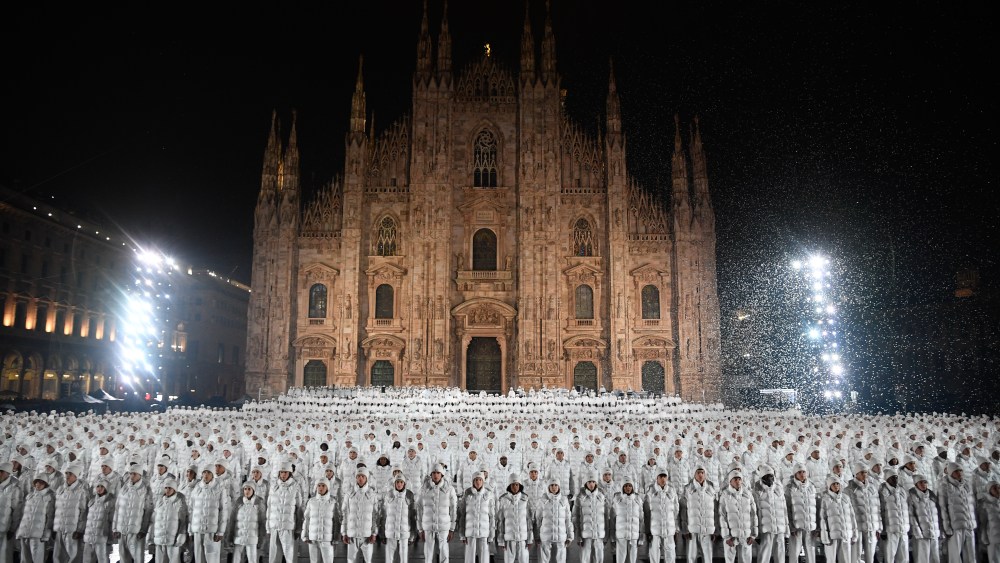 MILAN — Moncler’s takeover of Milan’s landmark Piazza del Duomo was quite the spectacle on Saturday evening.

The symbolic and unprecedented event to mark the brand’s 70th anniversary kicked off a 70-day program of global celebrations.

The performance was opened by the prima ballerina of Teatro alla Scala di Milano Virna Toppi and comprised 1,952 artists — representing the founding year of Moncler — and all wearing a white Moncler Maya 70 jacket.

The show was orchestrated by choreographer Sadeck Berrabah (Sadeck Waff) and the artists sang and danced in the square with a highly visual and physical performance that explored the power of repetition.

“Last night in Piazza del Duomo, I witnessed the perfect portrait of the future of Moncler,” said chairman and chief executive officer Remo Ruffini. “Tradition and innovation, key cornerstones of the brand, were united by the iconic Maya jacket — a design that keeps evolving in style and materials, thus, always remaining contemporary. We saw vigor in the execution and the uniqueness of an unprecedented performance exploring new territories in dance. There was a wave of emotion as we lived this experience together, and that moment was shared across the world through digital channels. And finally, what I am most proud of is that we gathered together all generations, and felt the strong energy coming from our communities. It is with them that we want to build our next 70 years. At Moncler we dream together, not alone.”

Ruffini has long touted the importance of connecting and engaging communities and the event was open to the public, who flocked to the square despite the rain. Spectators totaled a maximum-capacity of 18,000, watching the performance from the main square, as well as from the surrounding balconies and terraces.

The cast comprised 700 dancers, 200 musicians, 100 choir members and 952 models and the performance included a chorister, who began to sing acapella as Toppi appeared onstage, dancing solo.

Moments later, she was joined by Sadeck Waff as the whole Voci Bianche choir began to sing.

The choir came to a silence as a Milanese orchestra, with participating musicians from Teatro alla Scala, began to play “Carmina Burana.” The crowd then enjoyed a performance by Waff and a troupe of dancers with geometric movements. The music then transitioned from live orchestral to electronic music, performed by DJ Lorenzo Senni.

The vast 1,952 person cast, moving as one, formed a final tableau showered by confetti.

As part of the anniversary celebrations, as reported, Moncler will stage the “Extraordinary Expedition” multicity event, running in New York, London, Tokyo and Seoul and there will also be a Chinese leg starting Oct. 20 that will be entirely virtual, available on personal WeChat profiles.

The Maya jacket has been tweaked in a limited edition with 13 special colors and each, except for a platinum version, is crafted in Moncler’s new, lightweight, washed and lacquered nylon. The silhouette in a boxier fit offers even more freedom of movement with an enlarged hood, while poppers replace the front zip.

Also, Ruffini has asked seven designers to revisit the Moncler Maya jacket, to be launched on a weekly basis from Oct. 15. They are Francesco Ragazzi of Palm Angels; Thom Browne; Fujiwara of Frgmt; Rick Owens; Giambattista Valli; Pierpaolo Piccioli, and Pharrell Williams.

This month, Moncler is launching the “Extraordinary Forever” campaign.